SAO PAULO, Brazil — “If there was a death or a disaster, the editor would always make me go. That was my thing,” explains Daniela Falcão, recalling the eight years she spent working as a reporter for Folha de São Paulo, Brazil’s largest newspaper in circulation at the time. Today, her role in the country’s media landscape couldn’t be more different. As editorial director of Edições Globo Condé Nast, Falcão is more likely to be surrounded by killer heels than real-life killers.

From 2005 until earlier this year Falcão was editor-in-chief of Vogue Brazil, the title she continues to direct in her new role, supervising former deputy Silvia Rogar. But now, she also oversees the other magazines in the joint-venture publishing portfolio, which includes the Brazilian editions of GQ, Casa Vogue and Glamour.

Falcão’s rise from gritty street reporter to the top of the fashion food chain has certainly been exceptional. Deep in conversation, Falcão sounds like the sort of woman who could lead a luxury magazine by pure instinct. Looking the part, however, hasn’t always come so naturally. 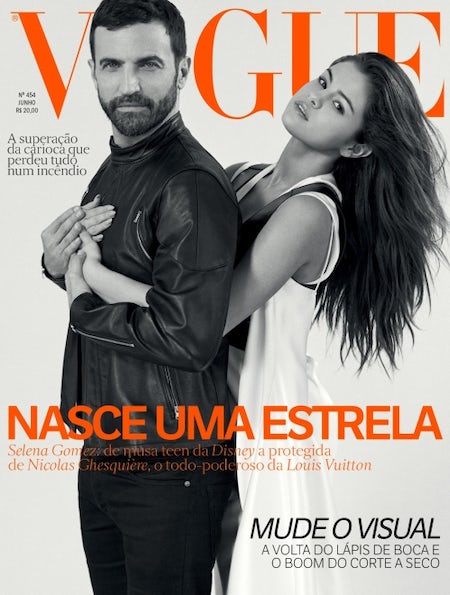 “I used to tell her, ‘fix your nails; get your hair done’,” says Donata Meirelles, Vogue Brazil’s style director and one of Falcão’s closest colleagues. Extraordinary though it may be for a woman at the pinnacle of the fashion industry to get such frank advice, it is worth remembering that Falcão’s route to Vogue was by no means ordinary.

Ask veterans of Brazil’s close-knit fashion industry for their thoughts on Falcão and one word that comes up more than most is ‘hurricane’. She is indeed fast, voracious and unstoppable, but with an energy that is more contagious than it is intimidating. Unlike her more prickly counterparts helming other editions of Vogue around the world, Falcão’s more down-to-earth approach is something she probably picked up in her former life.

Covering everything from floods to street crime, Falcão’s early days as a beat reporter made her tough and focused. Passionate about social issues — but mostly looking for the ultimate scoop — she moved from Brasília to one of the most remote areas of northern of Brazil in the late 1990s to investigate public health programmes that never seemed to function.

Early political exposés such as these won her a scholarship to Columbia University in New York, which provided an unintentional introduction to writing about popular culture and style. “While attending Columbia, I was [still] a correspondent for Folha de Sao Paulo, [but I started also covering New York’s] myriad events, from movie premieres with Brad Pitt to a Nine Inch Nails concert review. I did it all.”

With no fashion background, Falcão was pointedly not the obvious choice for Vogue. “My first two years were [spent] adapting to fashion, learning everything from designer’s names to the fabrics,” she says. But her vast experience writing about hard-hitting news topics seems to have given Falcão some of the fortitude she now needs to run a high-stakes fashion media empire in a volatile market like Brazil. It also made her more versatile and flexible to operate in a country suffering from ongoing economic, political and social upheavals. 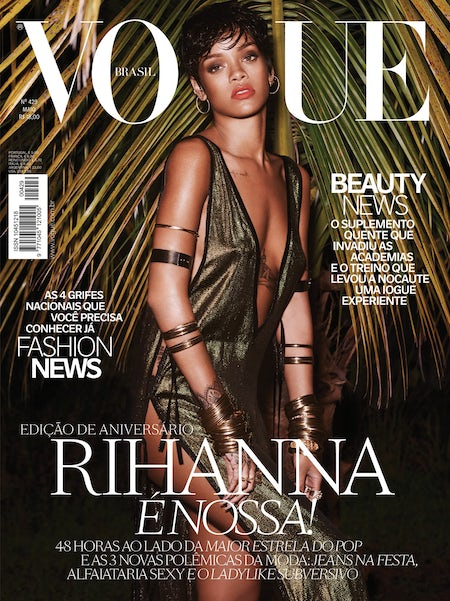 A decade after she took the reins at Vogue, Falcão has emerged as one of the most powerful individuals in Brazilian fashion — someone with enviable networks whose advice is solicited by multinational brand executives. “Behind the scenes, we actually had to meet with companies like Armani and Saint Laurent several times before they even considered landing in Brazil,” Falcão reveals.

According to a leading Brazilian fashion publicist who wishes to remain anonymous, Falcão’s influence over global designer brands grew fast. “Suddenly, my clients were cancelling things if Vogue didn’t pick their story. They would change the storyline or move launch dates to accommodate Daniela’s schedule,” she says.

More recently, Falcão quietly propelled Vogue forward through a period that saw Brazil transition from emerging market darling to hotbed of instability. Nevertheless, according to ANER, Brazil’s National Association of Magazine Publishers, monthly circulation at Vogue Brazil has increased from 55,000 copies in 2010 to 62,000 thousand copies in 2015. Women’s magazines like Manequim and Estilo de Vida have a wider reach but among high-fashion publications, Vogue Brazil reigns supreme since it overtook Elle Brazil last year.

Falcão ability to foster growth can be seen more clearly on Vogue Brazil’s social platforms like Instagram and Facebook where its influence is markedly stronger than its rivals. The title has over 1.3 million followers on Instagram, which is nearly three times more than that of Elle (published by Editora Abril) and is now way ahead of Harper’s Bazaar (published by Carta Editorial).

At first glance, this may seem like modest performance given Brazil’s market size of 200 million people and Vogue’s incumbent advantage. But many market observers see it as a significant achievement given the country’s reputation as one of the world’s most unequal societies and the tumultuous timing of Falcão’s tenure. 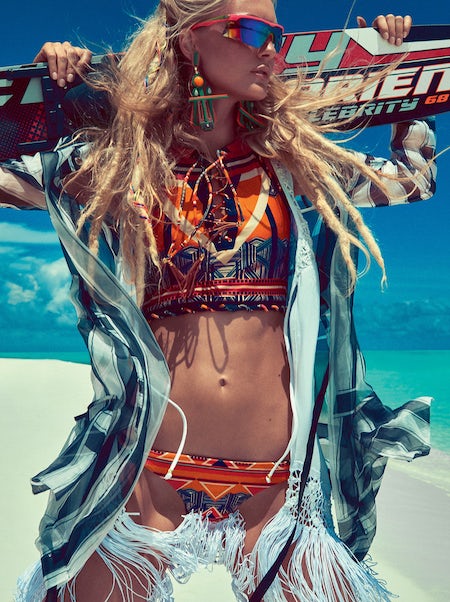 In the first half of the 2010s, Brazil was still enjoying the tail end of the commodities boom so although its economy hadn’t yet reached current levels of despair, it was feeling the political turmoil that later led to the impeachment scandal of President Dilma Rousseff. It was also beginning to suffer from social unrest on the streets, currency fluctuations, rising inflation and growing caution among middle class consumers.

“As for the [current] crisis, I don’t worry about the international players. For now, we only had three brands that are leaving the Brazilian market,” Falcão claims, citing Lanvin, Michael Kors and Kate Spade. “And international investment in the magazine hasn’t been reduced in 2016. Kering Group, for instance, has actually raised their spending 30 percent this year. It is a risk we are taking together.”

Falcão had already begun to give the magazine a more approachable, spontaneous and feminine slant by the time the economists began to worry. One of the first things she did when she took over was to make Vogue more relatable to its core demographic by including practical consumer insight and animated street trends.

“Vogue used to have a strong intellectual side, but the copy wouldn’t get anywhere. It didn’t connect. The magazine didn’t serve the woman and it didn’t show the local trends… It was a magazine for women made by men," she says, referring to the 28 years that Vogue Brazil was led by Luiz Carta and his son Andrea.

“Vogue was very stratospheric [then]. It covered [fashion] in a very snobbish way. So far from the reality in Brazil,” she adds.

Falcão recognised early that stardust could shift glossies like never before and that the only way to guarantee top names was to demand exclusivity. “The model agencies were wondering ‘who is this arrogant woman who claims that if Gisele wants to be in Vogue, she can’t be in Elle’. That was me,” she smirks.

By creating unbreakable bonds between Vogue and Brazilian supermodels, Falcão was able to provide Alessandra Ambrósio, Isabelli Fontana and others with a platform to be more opinionated and creative about the editorials they appeared in. “I need to represent Brazilian women who are bold and provocative. I could never have a minimalist cover,” she says. 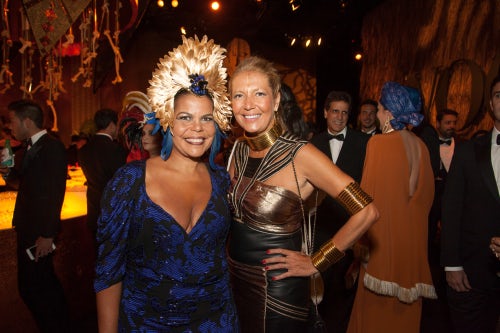 To distance Vogue further from its rivals, she hired Mario Testino in 2011 as an image consultant. “Not only did he change the way the world saw us, but he created an entire brand book on how we should look and feel,” she says. Since then, Falcão has tapped Rihanna, Kendall Jenner and Selena Gomez as cover girls. The May issue featured Naomi Campbell in an issue dedicated to women of colour.

Part of Falcão’s strategy is knowing who she needs around her to complete the circle. Though she is clearly the heart of the operation, Donata Meirelles is the life of the Vogue party. A bona fide jet setter, Meirelles is married to advertising mogul Nizan Guanaes and mother to social media star Helena Bordon.

Somehow, Meirelles is everything Falcão is not. Having served as director of the once iconic luxury retailer Daslu for 23 years, she is an intimate friend of international designers, photographers and a famous party host. Perhaps this is the secret to why this duo works so well together: they are the ying and yang of Brazilian fashion.

The upbeat aesthetic and the dolce far niente mood that has become synonymous with Vogue Brazil is a product of Falcão’s careful choice of collaborators. “Working with Vogue Brazil is always a party [but] she runs a great group of editors with a strong iron hand, and she is more than a fashion editor; [she is] a great journalist,” says Maria Grazia Chiuri, one half of the Italian design duo behind Valentino.

Falcão’s vision for Vogue Brazil may be carefree, effervescent and celebratory on the surface but her iron fist is well known behind the scenes, especially among her staff. “In the days before the model Natalia Vodianova gave birth, I had to stay awake all night. We had to be the first ones to publish [the news]. It was insane. I couldn’t take the pressure,” complains one of Falcão’s former online editors. 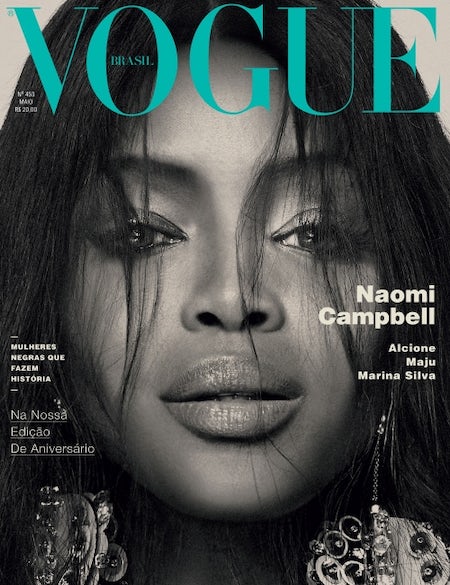 But according to Costanza Pascolato, a doyenne of Brazil’s fashion industry and columnist for Vogue Brazil for over 20 years, Falcão’s uncompromising nature is what sets her apart in a market like Brazil. "Her dynamism and ambition can be overwhelming,” she concedes. “But slowly I began to realize that Vogue is her fuel. Work moves her."

In a bid to grow the Vogue Brazil brand beyond its conventional media presence, Falcão’s remit has expanded since taking on a wider role at Edições Globo Condé Nast. Vogue’s Carnaval Ball in São Paulo has become Brazil’s answer to the Met Gala and a commercial launch platform for brands and products from sectors as diverse as beauty and automotive.

Earlier this month, Falcão brokered a partnershop with Veste Rio, a designer tradeshow in Rio de Janeiro bringing hundreds of buyers from across Brazil to view new collections and introducing consumers to an outlet shop that helped brands sell off overstock.

Falcão, like other Brazilian leaders feeling the convulsions of their home market, faces a tough road ahead with investors concerned about the Zika virus and the political clash facing the nation. Though some of Vogue’s wealthiest readers are immune to the ongoing economic crisis, many of its newer followers are not and the nervous mood in the country is something that can’t be ignored — even for a fashion magazine.

One of Falcão’s confidantes says she has been preparing for the calm before the storm. The spotlight will certainly be on her when the global fashion industry descends on Rio de Janeiro for the Louis Vuitton resort show next week, followed by the bigger stage of the 2016 Summer Olympics.

If the past ten years are any indication, Falcão will make the most of the upcoming attention. And should anyone cast doubt on her staying power for the next decade, she has a riposte ready to deliver. “I'm a warrior,” she laughs.