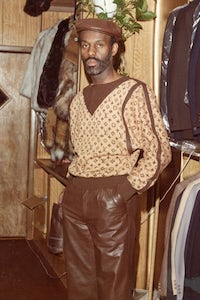 On Wednesday, VFiles announced that the upcoming edition of the runway show, now in its ninth season, will count Dapper Dan as a mentor. The streetwear innovator and tailor's 1980s and 1990s boutique on 125th street in Harlem set a sartorial tone for a generation of entertainers and celebrities through his distinctive interpretation of luxury brands.

His influence is still felt today — and reemerged in the larger cultural conversation in May 2016 when Gucci’s Alessandro Michele released a 2018 resort jacket that looked just like one designed and made famous by Dapper Dan. The Gucci look drew criticism as cultural appropriation; the house called it an homage.

“As hip-hop grew, the rappers got more diverse in style, and I'm seeing that reflection in the upcoming styles in the streets now, which in turn has influenced the bigger brands,” said Dapper Dan in a statement.

“One of the biggest things about street style now is that there is a lot of gender fluidity. People are taking more risks, especially with colour choices and silhouettes, which is really exciting because it allows for more possibilities and it is much different than the way things used to be." He continued: "Today’s social rappers are delivering a subliminal spiritual message, and that has trickled down to influence how people are dressing. I like that, I like that whole scene and what’s taking place right now — the way it’s emerging, the way it's developing. My mission with fashion is to help take it there!”

Editor's Note: An earlier version of this article misstated that Moffat is managing director of Art + Commerce. He left that post in 2014.