Dazed Partners with Yoho! to Launch in China

Dazed Media founder Jefferson Hack and investor Adrian Cheng are teaming up with the multi-platform streetwear player to launch in the world's largest luxury market. 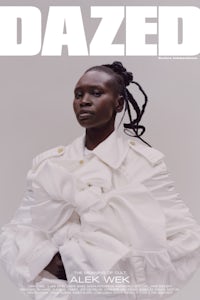 Dazed Partners with Yoho! to Launch in China

Dazed Media founder Jefferson Hack and investor Adrian Cheng are teaming up with the multi-platform streetwear player to launch in the world's largest luxury market.

The British independent fashion and culture media brand, founded by Jefferson Hack and Rankin Waddell in 1991, will come to China in August 2019 through a licensing agreement with Chinese youth culture empire Yoho!.

The launch is made possible by C Ventures’ Adrian Cheng, already an investor in both Dazed Media and Yoho!, who facilitated the deal and will be chairman of the newly formed company Dazed China.

"Dazed is one of the most influential independent media for producing content and creating brand campaigns across the luxury and lifestyle sectors, while Yoho! is China‘s largest streetwear e-commerce and media player," said Cheng. "This partnership is a perfect match, where Dazed can expand its footprint to China via YoHo!, and YoHo! can access global brands and international content via Dazed."

Cheng, who is executive director of jewellery brand Chow Tai Fook and executive vice-chairman of New World Development, added that the partnership demonstrates C Ventures' ability to add value to its portfolio of companies by creating a cross-border ecosystem. "Yoho!’s retail business is set to grow tremendously, especially after leveraging K11’s offline resources," he said, referring to 'art malls' he founded which are dotted across China from Shanghai to Guangzhou.

“Yoho is a future model for media in a way that we don’t have, or I haven’t seen yet, outside of China,” said Hack, adding that he and Cheng met with several partners about launching Dazed China. But Liang Chao, chief executive of Yoho! Group, stood out. “He’s built this incredible platform you know by being really authentic to street culture, to his roots, to his audience’s interest," said Hack.

When asked about plans to commercialise Dazed China, Liang wouldn't be drawn on specifics. "At the end of the day, it will always be the business of content," he said. "But 'content' could mean broader things, not just pictures and videos. Events and products can also become 'content'."

Dazed China will give the British title a larger global platform for advertising and editorial projects. For Yoho! — which started as a fashion magazine in 2005 and now encompasses publications, e-commerce and events — Dazed provides an opportunity to expand its remit beyond streetwear.

"We want to provide the global team a window into our world, to export the lifestyle of modern Chinese youth, and vice versa. We hope to show diversity rather than borders,” said Zang, adding that she hoped “more young people will be more confident through Dazed [China]” even “if the content we put out is still quite niche."

Cheng and Hack first met about three years ago and collaborated on a 2017 deal to bring Nowness, a video platform it co-launched with LVMH in 2010, to China. Cheng introduced Hack to Modern Media, the Chinese magazine publisher of titles like Modern Weekly, InStyle China and Bloomberg Businessweek. Dazed Media and Modern Media, aided by an investment from Cheng, acquired a majority stake in Nowness from LVMH and partnered to expand the presence of Nowness in China.

At that point, Hack was already working with another publisher to bring Dazed to China, but ultimately decided to pull out of the deal. Hack said he wanted Cheng to advise on Dazed’s future in China, and by travelling more to the country to work on Nowness in the past two years, Hack feels he understands the region better.

“Things look one way on paper and things look another way in reality, and it’s really important to do the real groundwork on establishing a relationship with a partner,” said Hack. “There’s no kind of external business pressure to do anything that doesn’t feel right.”

Hack also said he wanted to find a partner that treated the launch of Dazed China as something more than a traditional media licensing deal, which he describes as an “old school” approach to global media expansion.

“We are really trusting the vision of the senior editors, but there is a lot of collaboration and a strong partnership that is built into that,” said Hack, who said he learned about some of the challenges of collaboration across countries with the Nowness expansion in China. Dazed Media is hiring more bilingual and trilingual staff members as a result.

“That’s where the magic will really happen, that’s the difference between the license model and the integrated partnership,” said Hack about the collaboration between the teams in Shanghai and London.

When asked how he plans to maintain brand consistency between Dazed and Dazed China, Liang was more direct. "I believe during the whole collaborative process, whether that's now or in the future, we'll encounter many differences, and not just about the vision for the magazine," he said.

"Honestly, [that's] because China's youth culture and its western counterpart are very different and at different stages of development. We're not worried though. We believe our collaboration with Dazed will be an exchange and collision of China and western streetwear culture, but we hope to find common values and build a future together."

Dazed is currently available in Korea in partnership with editor Bom Lee, whose company holds the license. The magazine was previously available in Australia and Japan, deals that ended in 2008 and 2010, respectively. Hack said he wants to explore bringing Dazed back to Japan in the future, but the focus now is on the China launch.

Yoho! is an unusual platform because it has expertise in China’s highly localised social media as well as e-commerce, brick-and-mortar, print and events, said Hack. Dazed China’s launch will coincide this autumn with Yohood, the company’s flagship trade show festival in Shanghai which counts 60,000 attendees. Dazed China will plug into Yoho!'s infrastructure, publishing six issues a year and operating across all major social media platforms. Dazed China will also be connected to the Yoho! e-commerce platform.

Dazed Media is based in London and is the parent company of Another, Another Man, Nowness and Dazed, as well as the creative agency Dazed Studio. The company is not required to disclose its income statement because its turnover is smaller than £10.2 million (about $13 million).