NEW YORK, United States — Ten numbers, divided into three sets, are stamped in gold on the outer heel of each shoe. Each set corresponds to a style number, European size and colour. It’s the only visible branding on a pair of otherwise perfectly clean, pared-back Common Projects shoes. But to a certain rubber-soled cognoscenti, these gilded digits have become every bit as emblematic as the Nike Swoosh or the Adidas Trefoil.

When former V magazine art director Peter Poopat and brand consultant Flavio Girolami founded Common Projects, ten years ago, the market for premium-priced sneakers was relatively underdeveloped. However, their prescience was soon to be proven by a veritable boom in the luxury sneaker category, which has seen designer labels like Balenciaga, Givenchy and Saint Laurent selling sneakers everywhere from Sneakerboy to Bergdorf Goodman. A spokesperson for the privately owned company revealed that Common Projects has built a network of 150 stockists around the world and generates “roughly $10 million” in annual revenue.

Girolami and Poopat first met in the mid-1990s at a bar in New York’s East Village and soon decided to work on collaborative “projects” together. Both were avid sneaker enthusiasts; Stan Smiths, Air Jordan 1s and Chuck Taylors were some of their favourite go-to models, which later provided the inspiration for some of their own footwear. However, as their tastes evolved neither of them could find the more aesthetically refined and high quality sneakers they were increasingly looking for. “We didn’t want to wear Converse anymore,” says Girolami.

As it happened, Girolami had a base in the hills of the Marche region of Italy, a manufacturing hub specialised in footwear, and he soon challenged a local factory, which had been making formal dress shoes for over a century, to make him and Poopat their perfect pair of sneakers: a shoe that was comfortable but could be dressed up, offering a balance of quality construction and understated style, something that bridged the gap between the Guccis and Nikes they mutually adored.  The idea for a brand was born.

According to Girolami, the initial investment in Common Projects was “small,” coming straight from his and Poopat’s personal salaries. But as the duo worked on samples for their first collection, Girolami and Poopat had something of an epiphany. Inside the tongue of each shoe appeared its article number and size. In a flash, the founders decided to display these numbers on the outside of their shoes as a form of branding, having initially rejected the idea of using a stripe. They soon added another set of four digits— short-hand for the colour of each shoe — to balance the numbers out aesthetically. “It had a purpose, but it wasn’t necessarily permanent,” says Poopat. For customers who wanted a completely clean and blank shoe, the numbers could be rubbed off.

Launched for Autumn 2004, the company’s debut collection, “Achilles by Common Projects,” consisted of a low-top leather sneaker — the Achilles — available in white, gray and black. Paperclips, U-line staplers and army gear — “things that just do what they’re supposed to,” as Poopat puts it — influenced the shoe’s design. With a sleek silhouette, narrow toe box and hand-stitched smooth rubber Margom cup sole, it has all the aesthetic appeal of a high-priced sports car, something so beautifully crafted you didn’t realize you wanted it until you set eyes on it.

They first showed the collection to Steven Alan, who had just opened a showroom, as well as to Humberto Leon of Opening Ceremony, which was, at the time, “a large room with a big, purple velvet curtain — and behind the curtain, on a computer, was Humberto,” says Poopat. (Leon eventually placed an order). Poopat and Girolami also met with Stella Ishii of The News, a showroom with a reputation for launching the likes of Alexander Wang, Philip Lim and Band of Outsiders. Common Projects, however, would soon become her first foray into footwear.

Tokyo-based Ships was the first international retailer to place an order, but they weren’t the only ones interested in the line. “Everyone was interested right off the bat,” recalls Poopat. Demand for the product doubled every season. But Poopat and Girolami made a loss for their first couple of years. “We didn’t charge the right price,” admits Girolami. The company entered the market with product priced at $265, but were forced to recalibrate, raising prices gradually, so as not to shock consumers. (Today, the basic white Achilles retails for around $400). 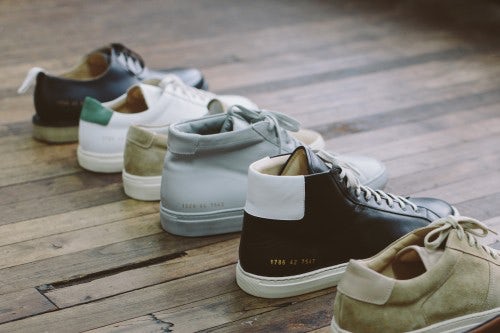 A selection of styles by Common Projects | Photo: Justin Chung

By 2007, Poopat and Girolami had enough traction to focus on their brand full time. Then the financial crisis hit. “It was a scary time,” says Poopat. But rather than turning negative, the company’s growth simply plateaued, bolstered by European demand.

Over the years, propelled by an explosion of websites covering menswear, sneakers and streetwear, the Internet has been a significant driver of growth for the brand. “Hypebeast, Selectism, all those guys, I think it’s amazing,” Poopat says. “The men’s market has blown up and we have to thank the Internet for a lot.”

In 2009, the company launched a full womenswear line (having previously experimented with two women’s models). “Women have been the dictators of fashion, right?” posits Poopat. While he admits the women’s market was tough to break into at first, the business is growing quickly and now comprises about 30 percent of turnover. Poopat says that the Net-a-Porter Group is currently their largest account.

Common Projects have become synonymous with quiet, clean, understated sneakers. It’s a coup they pulled off by designing shoes that both elevate and pay homage to familiar silhouettes, stripping away the details to let the pared-down shapes speak for themselves. When Adidas revealed a set of minimal white Stan Smiths made for distribution at Dover Street Market, Barneys and Colette, commenters on Hypebeast were quick to mention the similarities to Common Projects, with some even going as far as to call the stark white Stan Smiths “a rip off.”

In the sneaker world, resale value is a common indicator of a brand’s cachet. Depending on their rarity, ‘deadstock’ trainers from Nike’s Jordan brand can easily fetch 300 percent more than their original retail price on sites like eBay, where buyers paid $338 million for sneakers last year. Interestingly, there is a fertile resale market for second-hand Common Projects sneakers, too. Arun Gupta, the founder of Grailed.com, an online marketplace for fashion, says shoes by Common Projects are always in demand. “There is just so much hype around them; the Achilles almost always resells for $250-plus” even when worn.

In recent years, Poopat and Girolami have extended the ethos of doing the kind of collaborative “projects” that first brought the duo together to a number of creative collaborations with fashion designers. Since Autumn 2009, menswear designer Robert Geller has been working with the duo on silhouettes like combat boots (Fall 2010), double monk strap shoes (Spring 2011) and hiking sneakers (Fall 2014). For Spring/Summer 2015, Common Projects and Geller collaborated on zip-up oxford shoes and plush suede slip-on sneakers.

In Autumn 2012, Tim Coppens also began making shoes with Common Projects, first as a one-off then again for Autumn 2014, where he paid homage to Airwalk Lava sneakers by reworking Common Projects’ B-Ball High model in heavy-duty Schoeller fabrics. Poopat sees collaborations with designers like Coppens as an opportunity to add levity to the austere aesthetic of Common Projects’ line-up. “It’s kind of a relief to see a huge star or a big circle on the side of a silver shoe,” he says, referring to the slip-ons made with Coppens for Spring 2014.

After a decade in business, Common Projects has never raised external investment and is, at the core, still very much a two-person team, which means Poopat and Girolami don’t have to live by the numbers or by anyone else’s rules. Indeed, a combination of patience and diligent cash flow management has allowed their brand to flourish on their own terms, funded completely from steadily growing sales revenue. They describe the operation as a “Skype-y” one; though they now employ a total staff of five and have two small office spaces in New York and Italy, there is no need for a typical “head office,” which limits overhead costs.

Common Projects does not have “crazy [growth] curves,” according to Girolami. “Our company doesn’t really work like a standard company. Most companies have investors — and investors ask. They want to see numbers. On the business plan, they’ll say you have to grow by 30 percent each year and you have to compromise. We don’t have to.”

“We try to do something that is classic and timeless,” says Girolami. “You only get to introduce yourself once,” adds Poopat. “We approach each thing like it’s a first impression and we try not to fuck that up.”