Demna Gvasalia is BoF's Person of Year for 2016

This year, the Vetements and Balenciaga designer has distinguished himself as the person who had the most impact on the global fashion industry. 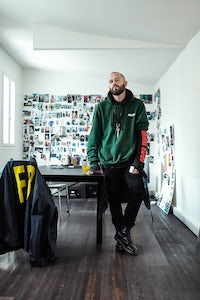 Demna Gvasalia is BoF's Person of Year for 2016

This year, the Vetements and Balenciaga designer has distinguished himself as the person who had the most impact on the global fashion industry.

LONDON, United Kingdom — The times bring forth the man, or so the saying goes. And if these turbulent times in the fashion industry have been shaped by one person this year, it is the head designer of Vetements and the artistic director of Balenciaga, Demna Gvasalia, who graced the cover of BoF's special print issue, The New World Order, in February.

Over the past 12 months, the Georgian designer has brought a couture sensibility to luxury streetwear label Vetements, and a streetwear sensibility to his work at the high fashion house Balenciaga, creating waves that have rippled throughout the global fashion industry. 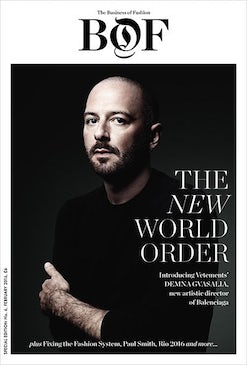 Although much of the discussion surrounding Gvasalia has centered on his creative influence on the industry, Vetements’ operational model, rolled out at the beginning of this year, has made an equally important impact on the industry. Despite its comparatively small size and independence, Vetements was among the first brands to rethink its approach to the "broken" fashion cycle, alongside much bigger players such as Burberry, Tom Ford and Tommy Hilfiger.

“The whole system just didn’t work anymore… There is no relationship between the creative vision and the commercial vision. This whole vicious circle turns and turns at a very fast speed and kills both the creativity and the business,” Gvasalia told BoF back in December 2015. On reflection, Gvasalia’s sentiments and Vetements' resulting commercial strategy now appear impressively prescient.

“From the beginning we agreed that we would only produce two collections a year and we would not engage ourselves into making pre-collections. The creative part needs to be much more in advance of the market, and to offer something that is not out there, to challenge it and to make the market want it,” said the designer. 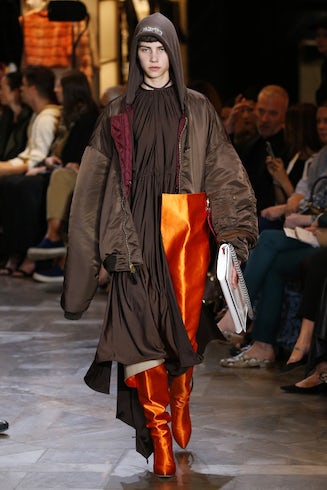 In order to maintain consumer desire for Vetements product, Gvasalia and his brother Guram (Vetements’ chief executive) also shifted the timing of their shows away from the major womenswear seasons, seeking to encourage high sell through rates and avoiding discounting.

“The idea is to show after men’s fashion week — between men’s and couture in Paris — and for the winter season at the end of January. This means the collection will be delivered, at the latest, in June, which makes the life cycle of the product in the store much longer. At the same time, it makes it easier for the factories that actually have to produce it,” he said.

To achieve that shift in the calendar, which reduced the lead time for that season’s collection by four months, the Gvasalia brothers also pulled off one of the most innovative commercial and creative moves of the year, collaborating with 17 major brands for Vetements' Spring/Summer 2017 collection, shown in the vaunted art-deco splendour of Galleries Lafayette in July.

Gvasalia once again proved he could offer a take on fashion that is both challenging and familiar, its exaggerated silhouettes and plays on proportions simultaneously celebrating and subverting fashion tropes and culture. From over-the-hip Manolo Blahnik boots to Brioni tailoring, Juicy Couture loungewear, Comme des Garçons shirting and Levi's denim, the collaborations enabled the brand’s creative team to focus primarily on design while co-opting their collaborators’ production know-how and manufacturing capabilities. 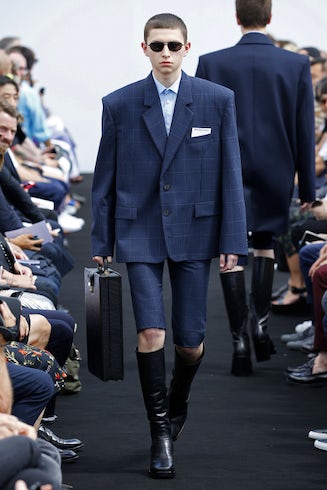 The industry’s great and good congregating in a classic department store, waiting to see an emerging label renowned for its ability to defy the conventional wisdom of the fashion industry, not only prompted commentators to make reference to Homer’s Trojan horse, it convincingly dismissed naysayers who predicted poor attendance and media pick up.

Vetements also continued to subvert ‘the marketing machine’ with canny ideas, such as replicating the appearance of the much-loved original iteration of Style.com on its website (in a deal that will also see it remake its first collection to be sold exclusively on the new Style.com) and launching an ‘Official Fake’ capsule collection of established bestsellers with Matchesfashion.com in Seoul.

But perhaps most importantly, Gvasalia and his design team continued to create cult products including the lighter-heeled boots, densely printed floral dresses, logo-ed hoodies and engorged outerwear seen on all the right people, referenced countless times by other brands and sold out in stores.

If that weren't enough, Gvasalia’s debut collection for Balenciaga had the ‘rightness’ of something the industry has been waiting to see, immediately casting a giant shadow over the entire season, instantly proving his ability to translate the essence of Balenciaga’s couture into a ready-to-wear collection without diminishing its purity or its emotional charge. 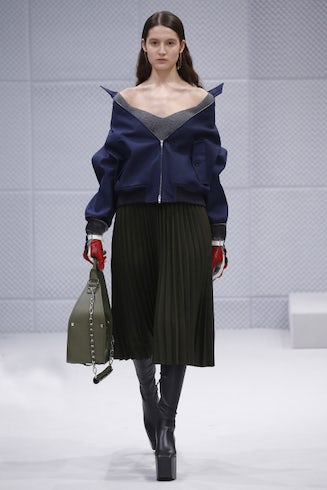 The respect that Gvasalia showed for Cristobal Balenciaga’s iconic silhouettes silenced even the most vehement of critics. Whether or not the tailoring and classic sportswear he showed on the runway matched one's personal taste, the creative vision of the man behind them and the rigour of his process was indisputable — and reflected a real understanding of the legacy of Balenciaga. “It’s an honour for me to give [Cristobal Balenciaga] that respect,” the designer told BoF.

Following his debut, the designer showed a divisive but again critically commended menswear collection for the house two months later in June. An impressive feat given that Gvasalia was not able to directly reference Cristobal Balenciaga’s work, as the eponymous founder of the house never created menswear. However, Gvasalia's obsessive focus on shape, his stubborn will to work on the silhouette, hit the reset button in the simplest and most effective of ways.

By October, when Gvasalia showed his most recent collection for Balenciaga, he had become an established figure in the fashion firmament — and also responded to criticism that his shows lacked diversity by casting models which more accurately mirror his growing customer base. And once again, the designer imbued his work with a sense of urgent desirability, exploring the similarities between couture and fetishism in a cerebral but ultimately accessible way.

“Today, the reality is that there is so much stuff available from which you have to choose, the biggest challenge is to make something that people choose… Not to create a fairytale — that’s not reality — but to make that hoodie they want to wear or that dress they need to have,” the designer told BoF back in 2015.

This year, the commercial and creative impact of that approach is incontrovertible.