NEW YORK, United States — While conducting a blind test of hundreds of raw ingredients for his brand's first-ever fragrance, Jason Wu kept coming back to jasmine. “Scent, you have a very visceral reaction to,” says the designer. “When I was growing up in Taiwan, there was jasmine growing and I picked it with my cousins. I have great memories of it — and so it describes my journey up to now.”

Not all designers personally oversee the development of their signature scents, from top and bottom-note combinations to bottle design or packaging. But in a challenged fragrance market where the small-but-growing "niche" category is a bright spot, Wu may well be onto something by embracing the artisanal trend. Sources close to the fashion brand — which sold a majority stake to investment firm Interluxe in 2014 — project sales of the fragrance could reach up to $10 million in its first year. 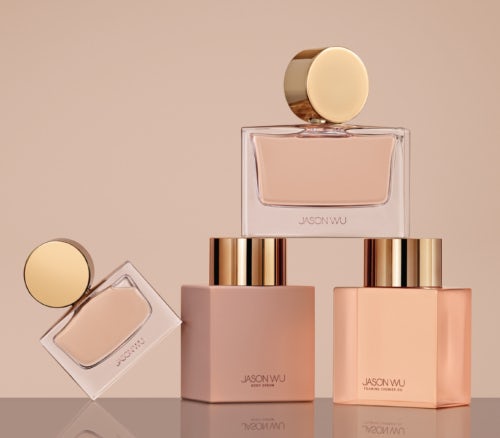 It's a solid forecast, given that the fragrance market is in the midst of a tough patch. Like much of the retail sector, the mass market is stalling. Celebrity fragrances have long been in decline, dipping 22 percent to $57 million in 2016 in the UK, and 66 percent to $50.6m between 2011 and 2014 in US department stores, according to market research firm NPD Group.

Now even designer fragrances, traditionally top sellers in department stores, are struggling. Coty Inc., the world’s third-largest cosmetics maker and owner of the Burberry Beauty license, reported a sales decrease of 3 percent in its luxury division in the fiscal year ending June 30, 2017, driven by declines in the Marc Jacobs and Calvin Klein scents, although organic sales increased by 5 percent in the fourth quarter. US mass market fragrance sales declined last year, and prestige fragrances increased by just 1 percent, according to NPD. Compare that to the rest of the US beauty industry, where prestige makeup climbed 12 percent. In France, Italy, Spain and UK, the overall fragrance market grew just one percent to $6.9 billion in the year ending June 2017.

The numbers indicate that consumer preference has shifted towards niche brands, which has added nearly a quarter of a billion dollars to the market in the past three years, according to NPD. These artisanal scents often boast more concentrated and natural ingredients, are usually sold in small or independent boutiques and are less likely to be heavily marketed or endorsed by celebrities.

“The biggest winners are the niche brands, providing a good experience, and brands that come with strong new launches in the high-end,” says Mathilde Lion, a beauty industry expert at NPD in France. “It’s still very dynamic and growing double-digit in niche brands. Also, classical brands with their high-end collections, everything that is in high-end fragrances, are doing very well. There is a certain part of the population who is willing to pay more than €200 ($235) for a fragrance.”

Niche fragrances tend to focus more on the originality of the scent, natural ingredients and higher quality “juice” making them last longer. They also typically offer a collection of fragrances, and invest in service rather than marketing. Celebrity links are out, and product quality is in.

D.S. & Durga is one such brand: a Brooklyn based perfumer with 100 percent year-on-year growth for the last three years. “We began in Brooklyn, handmaking scents for friends,” owners and perfumers David and Kavi Moltz tell BoF. “Our plan has always been to push perfume more towards the arts and to educate people to understand what is happening in a perfume. We want to exemplify the power of what a perfume can do. We feel perfume is an art like any other, that can convey messages and immersive worlds to explore." The brand is expanding its product offering and launching at more boutiques and high-end department stores globally, including Barneys New York. A 1.7 oz. bottle of Radio Bombay fragrance sells for $175.

Wu says he is an admirer of niche brands like Frederic Malle and Byredo. “Funnily enough with fragrance, it’s the last touchpoint, but that was absolutely the most important point," he says. "I didn’t want to compromise on quality. There is a real appreciation of artisanal in the fragrance market. [The Jason Wu scent is] a hybrid between an artisanal fragrance and a designer fragrance.” The price — $145 for a 3 oz. bottle — reflects this.

To make it happen, Wu partnered with Parlux Ltd., a company that creates, manufactures and distributes fragrances. “There was a more independent spirit," continues Wu. "I didn’t have to go through a lot of corporate levels. It was me and the perfumer and the people I selected to collaborate on — they were all people that were close to me. I didn’t have to go through the usual corporate red tape when it comes to a project like that."

Parlux also produces fragrances for the likes of Kenneth Cole, Rihanna and Paris Hilton. While sources close to the company say the Paris Hilton fragrance still generates annual sales of around $50 million — thanks to its popularity in Mexico, Latin America and Asia — it is better for the business to focus on the high-end and artisanal bracket.

It’s an art form, there is great pride, it's not like putting out soda pop.

“Retail right now is really tough and it's because it’s all gotten so mediocre. It’s all about the quality, it’s bringing back respect for the ingredients, it’s an art form, there is great pride, it's not like putting out soda pop,” says Don Loftus, president of Parlux Ltd, who previously worked at Procter & Gamble’s prestige division, as well as L’Oréal and Estée Lauder. “Customers who would [previously] never have dreamed of buying a $250 fragrance [now] are, because they are so special. It’s recreating some of the magic that used to be in the industry.”

While traditional fashion houses use fragrances as an entry-point into the brand for customers who might aspire to own the designer clothing, it is also seen as means to further establish its message and identity. One could argue that Victor & Rolf’s “Flower Bomb” fragrance, for example, is more well-known than the fashion label itself. It has also been historically very lucrative. “A lot of these fragrances have paid the bills for a lot of these fashion houses," Loftus says. "What percent of women can afford the fashion? What’s keeping these fashion houses going is things like the fragrances business and other licensing opportunities."

While Jason Wu chose Parlux, a relatively small manufacturer, larger players such as L’Oréal, Coty and Estée Lauder Companies are also tapping into the success of niche, artisanal scents with varying degrees of success.

Niche Is the New Normal

In the last few years, Estée Lauder has snapped up Le Labo, Editions de Parfums Frédéric Malle and By Kilian, a French perfumer. All are sold in their own boutiques and select high-end department stores, have little marketing and offer collections with high-end ingredients and price points. Le Labo’s popular Santal 33 sells for $180 for a 50ml bottle, while By Kilians’ Good Girl Gone Bad is $275.

“It’s not that being niche is new, but the growth trajectory of the niche brands and market share has become increasingly important," says John Demsey, executive group president of Estée Lauder Companies. "A lot of the retailers have taken proprietary position in terms of differentiating their offering in the broader marketplace. Part of it is based on amplification of social media and the importance of brand heritage, authenticity and unique difference in story telling.... The ones doing well have unique founder dynamics, unique retail concepts dynamics or unique service dynamics. There will always be a place for products on the shelf, people know what they want and they can go and get it. But the idea of discovery and inspiring the world of possibility gets amplified in this dynamic.”

Last week Estée Lauder reported its strongest quarterly sales growth in three years. Fragrances, while still a small proportion of its business, had the strongest growth in the fiscal year at 10 percent. That was well ahead of both skincare and makeup and was driven by “strong double-digit gains” from luxury brands Jo Malone London, Tom Ford and Le Labo. Demsey says Jo Malone, considered a niche label twenty years ago, is “the largest, fastest growing and most successful we see.”

Demsey says the artisanal and niche is also informing designer fragrances and licenses. “Many successful ones in the marketplace, like Aerin or Tory Burch, are done based on a collection of fragrances rather than a one hit wonder of a designers' point of view. Niche is the new normal. Many niche ideas have become very commercial.”

Demsey cites Lanvin, Guerlain, House of Dior, Chanel and “the good old days of Elizabeth Arden” as evidence that many big-name brand were once considered niche. “Really great product is as old as the industry itself, there are just different brands doing it. In addition to long-standing classic heritage brands doing an amazing market, this is a high-growth, highly-profitable area.”

One successful designer fragrance launch is Derek Lam’s 10 Crosby fragrances, a collection launched last year under the designer's secondary label targeting 25 to 35-year-old women. A touch of the “niche” is seen in the 10 different fragrances on offer alongside its launch tactics. Ten independent filmmakers created their own interpretation of the ten moments and names of the ten scents, including “Drunk on Youth” and “Silent Street” that could have happened in downtown New York. None mentioned the perfume.

Distribution was kept tight. The fragrance was exclusively stocked in Sephora and is now also available in Nordstrom, with a new $38 parfum stick. Industry sources say sales are already over $10 million.

“Fragrances are a wonderful entry point into a brand and a compelling way to not only engage existing consumers but recruit new consumers to the brand," says Derek Lam chief executive Jan-Hendrik Schlottmann. "The collection of ten fragrances has been successful in bringing in an entirely new customer from the fashion customer.”