Data released by Instagram as part of its 'Year in Review' reveals the most popular brands on the photo and video sharing app, as measured by followers, engagement and buzz.

SAN FRANCISCO, United States — Dior, Hermès and Louis Vuitton are Instagram’s most buzzed-about fashion brands of 2017, according to new data released today by the photo and video sharing app. The brands were named in Instagram’s Year in Review global data package, revealing the most popular fashion labels and models as measured by followers, engagement and buzz.

Dior was the most buzzed-about designer label this year, based on data derived from number of mentions and comments. It’s perhaps no surprise the French couture brand won the top position: the brand's famous “We should all be feminists” t-shirt — which first conveyed the activism-tinged, Millennial-friendly approach Chiuri has brought to Dior since taking the creatives reins at the storied French luxury house in July 2016 — attracted huge attention across social media in a year that saw women’s rights protests all over the world and an avalanche of sexual abuse scandals. The social media-savvy "J'adior" branding, introduced by Chiuri across accessories including the slingback kitten heels and the flap bag, also struck a chord on Instagram. 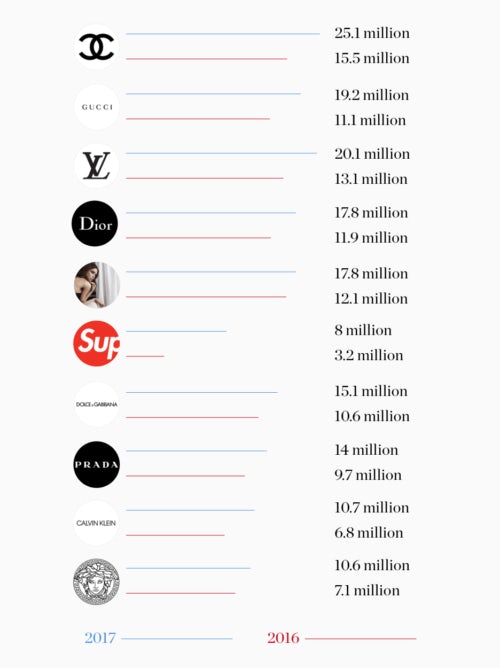 Just behind fashion juggernaut Gucci's Alessandro Michele, Fenty Puma by Rihanna top the second-place spot for most engaged followers, based on a winning ratio between interactions — measured as likes and comments — and the brand’s follower count. Rihanna was recently named the most influential celebrity by fashion search platform Lyst. And such is the power of her influence that emerging label Molly Goddard — often worn by Rihanna — made the list in sixth place. Goddard was the only emerging designer to be included across all categories.

Supreme made 'Year in Review' in two categories, taking ninth place in the rankings for most engaged followers and sixth place in the rankings for most new followers this year (4.8 million, bringing its total follower count to 8 million). It’s been a newsworthy year for the New York-based streetwear label, which released a major collaboration with Louis Vuitton, attracting waves of consumer excitement as well as charges from longtime fans that the company had sold out, and raised investment from the private equity giant the Carlyle Group.

Victoria Beckham took the top spot across multiple categories, including most views on Instagram Stories and most-liked single photo (which, incidentally was nothing to do with her fashion line; instead, it was a picture of Beckham's husband David on his birthday in May, which gained over 1.1 million likes and generated thousands of comments). Victoria Beckham was also ranked amongst the top 10 brands that gained the most followers this year — 5.7 million — putting her in fourth position on the ranking of most followed designer with a total of 17.2 million followers. Beckham ranks behind Chanel (25 million followers), Louis Vuitton (19.2 million followers) and Gucci (17.8 million).

Instagram's 'Year in Review' also rounded up the most influential models of 2017. Kendall Jenner, who recently took Gisele’s crown as the highest paid model, hit the top spot across multiple rankings. Jenner was the most followed model (85 million followers), the most buzzed-about model of the year and published the most-liked model photo of 2017 with a picture of herself in a crop top and gingham bikini, with a pizza emoji caption that gained 4.5 million likes.