LONDON, United Kingdom — “It was immediately clear to everybody that this was something special,” says Luisa Delgado, the chief executive of Italian eyewear licensing giant Safilo, recalling the time she watched the first pair of Dior’s ‘So Real’ sunglasses come off the production line at Safilo’s specialist plant for metal frames in Longarone, a small town in North East Italy. “All the technicians and the workers gathered around to see it, discussing it. Of course, you could see there was no bridge, a very interesting construction, but the most special thing was that it was wearable.”

Safilo and Christian Dior have produced eyewear together for over 20 years, but the popularity of Dior’s sunglasses brand took a leap forward with the release of the ‘So Real’ range for the Spring/Summer 2014 season. Priced from £310 to £539 ($400 to $700), the range had eye-catching, millimeters-thick lenses. The uniqueness of the lenses, plus the visual signature of the finely wrought, aviator-shaped frames, notably absent a nose bridge, instantly appealed to the sensibilities of the Instagram generation. Indeed, very few brands’ sunglasses are recognisable by shape alone. Dior’s are. 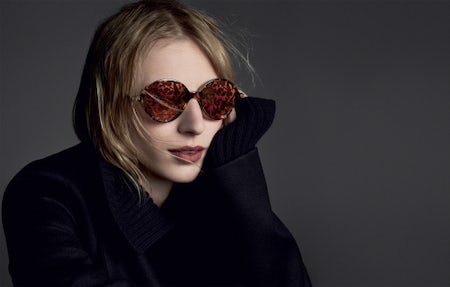 “Dior pushes the boundary in the realm of sunglasses,” says Sarah Blair, senior vice president and divisional merchandising manager for women's accessories and shoes at Barneys. “Their designs are innovative and modern — real fashion statements. The brand has been on a major trajectory since 2014 with iconic styles as ‘So Real’ and the new ‘Split 1’ aviator driving the business.”

“Dior is one of the top selling eyewear brands at Lane Crawford. There has been a growth in the demand for the brand especially since the launch of the ‘So Real’ style,” concurs Su Kim, senior vice president of merchandising and operations at Pedder Group, which operates the shoe and accessories department of Lane Crawford.

Dior eyewear generates sales of about €190 million to €200 million (about $212 million to $223 million) across all distribution channels, according to Luca Solca, head of luxury at Exane BNP Paribas. To put this into context, Solca estimates that Chanel, a key competitor and a bigger business, whose sunglasses are “more expensive and less broadly distributed,” generates eyewear revenues of approximately €120 million (around $133.9 million).

We don’t just want to grow with the category, we want to lead the growth.

“Dior enjoys one of the leading growth rates in our portfolio,” says Delgado. Safilo produces eyewear for 28 brands, ranging from luxury labels like Céline, Givenchy and Dior to accessible names like Havaianas and Banana Republic. In August 2016, the company reported group wholesale revenues of €612.4 million (almost $684 million) for the first six months of the year.

For brands like Dior, eyewear is a licensing business that requires little investment, but is extremely valuable — not only in terms of direct revenue generation (brands normally charge royalties of 6 percent), but also due to entry-level positioning of the category, which functions as a gateway to the brand. “The impact from its success extends to brand visibility and media spend,” says Solca.

Delgado believes there are three elements to Dior’s sunglasses success: “Extraordinary product, extraordinary communication and extraordinary distribution,” she says. In addition to the innovative design of the product itself, the decision to fully integrate eyewear into the broader Dior brand across a wide range of touchpoints, from its campaigns to its runway shows, has been a key driver of success. “It is a holistic approach, viewing eyewear as part of the total. Across anything that is being done, eyewear is an integral part,” explains Delgado.

Of course, to justify the approach, the product needed to be up to scratch. By investing in novel design and innovative materials and treatments, Safilo created a range luxurious enough to sit comfortably alongside Dior’s ready-to-wear, in stark contrast to some other licensed eyewear lines, which often feature generic plastic frames, with brand emblems stuck on the arms. The Dior eyewear range can command a price much more in keeping with luxury ready-to-wear positioning than other licensed products. 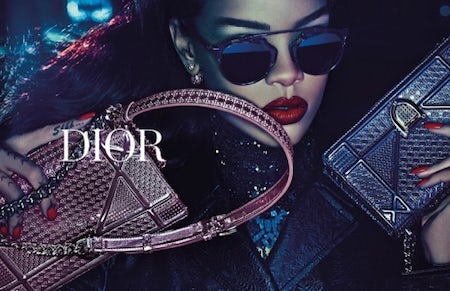 Celebrity and influencer endorsement, and strong editorial support from fashion publications have also helped Dior pull away from competitors. “One indicator that we use is DMR (Digital Media Research), where external companies measure the editorial returns of brands. This is earned advertising — not paid — and of course that is an indicator of the awareness, desirability and presence of the Dior eyewear brand. Dior is our best performing brand in those measurements, with the exception of a few countries in Latin America,” says Delgado. “The ‘So Real’ style has been seen globally on everyone from bloggers to supermodels to celebrities. The visibility anchored alongside seamless architectural lines, a modern take on the traditional aviator with the brand’s couture aesthetic has emotionally engaged the customer,” adds Kim.

But, critically, the distribution strategy has been hyper-selective, unlike the less controlled strategies typical of most licensing contracts. “Creating and sustaining a very desirable brand comes from increasing the quality standard of the doors. With Dior, we have entered what we call hyper-selectivity with doors. You want fewer doors, better doors, more productive doors,” explains Delgado.

To achieve “more growth in fewer doors,” Safilo continually iterates and upgrades its Dior product with a steady stream of new materials, colours and shapes, including distinctively coloured lenses in shades impossible for cheaper models. “Every collection you are really talking about three models, not just one. You want to continuously interpret it in various versions that give you different price points, different aesthetics. That ongoing reinterpretation, collection after collection, requires a lot of technical understanding and expertise but with that and a strong brand combined, you can really create a sustainable, expanding story,” says Delgado.

“Dior is one of our best-selling sunglasses ranges. As soon as it was possible for us to stock the collection we did, the popularity is huge and it’s not waning. The most popular frame is the ‘So Real’ but the other shapes are starting to compete, most significantly the split aviator and the new ‘Diorama,’” says Natalie Kingham, buying director of Matchesfashion.com.

As for the future, Delgado plans to tap the growing opportunities in men’s and optical glasses. “To grow your business more robustly and more sustainably, you always want to grow the foundation,” she explains, “But today, Dior Homme is taking on the mantle and growing considerably and we are really, really pleased about that because the men’s category in eyewear is clearly a growing category. And then you have the third angle: optical has become a designer item and therefore optical can receive the halo effect from the sun success. We don’t just want to grow with the category, we want to lead the growth.”