TEL AVIV, Israel — When digital agency Preen.me was founded in 2012, its mission was to offer brands — many of them in the beauty space — the opportunity to observe, analyse and evaluate the conversations consumers were having about their products on social media. But as Preen.me’s database grew, it wasn’t only brands seeking insights: it was also potential investors, who were increasingly looking to social media data to determine whether or not a brand had real business potential.

Evaluating “social health” has become an important part of the pre-investment “workup,” or the thorough examination of a venture’s current state, from its cash flow to its debt balance.

“The ability to create organic buzz is a long-term indicator of whether the product is unique in some way and whether the founders are going to be able to build a viable business model,” said Susan Lyne, president and managing partner of BBG Ventures, an early-stage fund with a portfolio that includes activewear retailer Carbon38 and kidswear brand Rockets of Awesome.

With more people using social media than ever before — 3.48 billion in 2019, up 9 percent from a year earlier, according to a report from Hootsuite — social media stats have never been more telling. And while many investors are using those stats to gauge the validity of a potential deal, others are pulling social data to check in on brands that they’ve already bought into.

“You can never understand the nuances just from the balance sheet,” said Danya Klein, vice president of brand relations at Preen.me. Along with financial due diligence, stakeholder interviews, focus groups and surveys, “Investors have found that social health can serve as a competitive benchmark, allowing you to identify strengths, weaknesses and growth levers within a business.”

Social data is even being used by investors as a discovery tool to figure out what brands they should be paying attention to in the first place. “It’s about the opportunity attached to the brand,” said Brit McCorquodale, senior vice president of revenue at San Francisco-based analytics firm Tribe Dynamics. “We’re looking at up-and-coming brands that [investors] should be paying attention to, then monitoring them as they grow and gain momentum online.”

With social media, the cost of introducing a brand has gone down immeasurably

But defining “social health” is complex. “It’s getting harder to figure out which brands are going to be successful, which brands will be scalable,” said Andrew Shore, managing director at Moelis & Company, an investment bank and financial advisory service that works on both the buy-side and sell-side. (For instance, it advised private equity firm TSG Consumer Partners when it acquired a minority stake in Huda Beauty in 2017, and is advising Drunk Elephant as it explores a possible sale.) “With social media, the cost of introducing a brand has gone down immeasurably.”

So, how do you define social health? While overall following is a good indicator of the size of an audience, it’s hard to tell what percentage of those followers are organic and which have been acquired through paid marketing channels. The rate of growth is similarly opaque. Sometimes a brand will get a major boost from a top influencer, but that momentum will peter out after the influencer’s contract is up. Same goes for conversions.

“Brands are very much focused on influencer marketing, but the churn rate can be high,” Klein said. “They activate influencers, get the bump and then see a drop in conversation.”

Perhaps the most important metric is the engagement rate, or the conversation about a brand that’s happening online, which can be evaluated through comments, likes and hashtags, not only on the accounts of brands and influencers but also on consumer accounts, as well as message boards like Reddit and curation platforms like Pinterest.

It’s also important to look at brand sentiment when analysing the conversation both on and off a brand’s own platform. “A positive sentiment that is consistent over time is a sign of a strong brand that is largely unaffected by specific events,” said Preen.me chief operating officer Haggai Klorman-Eraqi.

Combine all of these metrics — reach, audience growth, conversion and engagement — and a holistic picture of a brand’s social health begins to form. But nuances within these metrics also need to be considered.

Just because a brand isn’t “big” on Instagram doesn’t mean its audience isn’t engaged. While data analytics firms pull a majority of their data from the Facebook-owned photo-sharing platform, as well as Facebook itself and Twitter, there are other gathering places that investors often peruse to get a sense of a brand’s community. Most notably: YouTube, Pinterest and Reddit, where fans and foes alike sound off on a product’s good and bad qualities.

For instance, Allbirds has about 241,000 followers on Instagram, and most of its posts generate well under 100 comments each. But visit Reddit and you’ll find hundreds of in-depth threads, where customers write lengthy testimonials and recommendations. (The anecdotal verdict: most commenters find that Allbirds shoes are very comfortable, and many say that one pair can be worn for two years before needing to be replaced.)

Subscription service Birchbox has just over 600,000 followers on Instagram, but on Pinterest it has over 7 million monthly unique viewers that spend time pinning items from its 47 boards, which include everything from new product shots to images of unboxing moments. 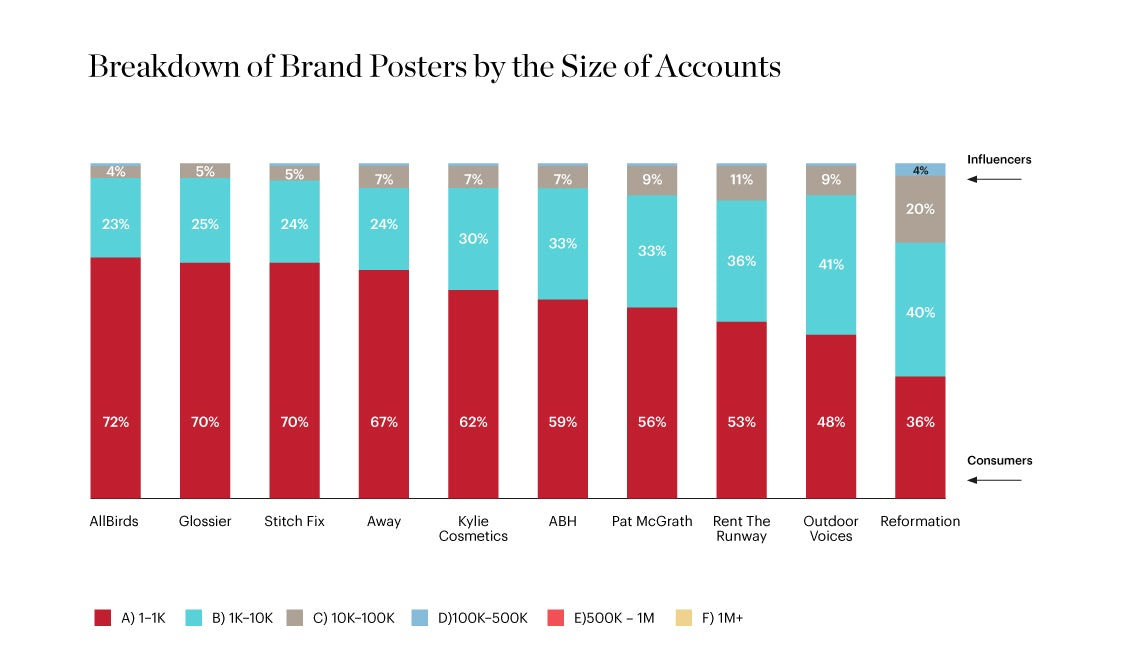 Slowing community growth doesn’t necessarily mean slowing sales. If the conversation is stagnating, try to figure out why. For some brands, fast-and-furious social growth is difficult to maintain organically. But that doesn’t necessarily mean sales are going to slow, especially if a product is not yet widely distributed. What’s more important is determining whether a brand’s community is still growing in areas of the world where it is under-penetrated.

“If the conversation is slowing, figure out the factors that are driving that slowdown,” McCorquodale said.

For example, Anastasia Beverly Hills doesn’t have a tremendous number of new followers entering its conversation, which could raise a red flag for some investors. But millions of “real” people — or consumers with 1,000 social followers or fewer— actively discuss the brand each day online. With a reported $340 million in sales in 2018, it’s still a small brand compared to many of its more established competitors, which have more name recognition and less engagement online, indicating Anastasia still has plenty of runway. “If you look at Anastasia and a brand like CoverGirl, which has massive market awareness, it’s important to note that Anastasia’s community is concentrated, but potent,” McCorquodale said.

A brand that boasts an engaged community and steady sales growth is a better long-term bet than a brand that has been unable to build a community but is displaying rapid sales growth. It’s relatively cheap to build a brand online today through paid customer acquisition. “Today, the cost of introducing the brand under the guise of social media is between $500,000 and $1 million,” Shore said. “Before, $1 million wouldn’t even buy you slotting allowances.” (He’s referring to the fixed fee charged by retailers for shelf space.)

But will those customers stick around after they’ve taken advantage of one promotion? For investors looking to make a brisk return, betting on a rapidly scaling business that is looking to sell quickly can pay off, but it’s risky.

Most investors take a safer path. In conversations with BoF, several analysts and investors — ranging from seed-stage to private equity — cited Glossier’s balance of community engagement and sales growth as the leading example of what most investors actually want. Glossier hasn’t grown as fast as some of its competitors, in large part because it is only sold direct-to-consumer and does not benefit from the large distribution that retailers like Sephora and Ulta bring. But it has a highly engaged community — both on and off its own platform — and was able to double its sales to $100 million in just one year, garnering a $1 billion valuation in a $100 million funding round announced in March 2019. 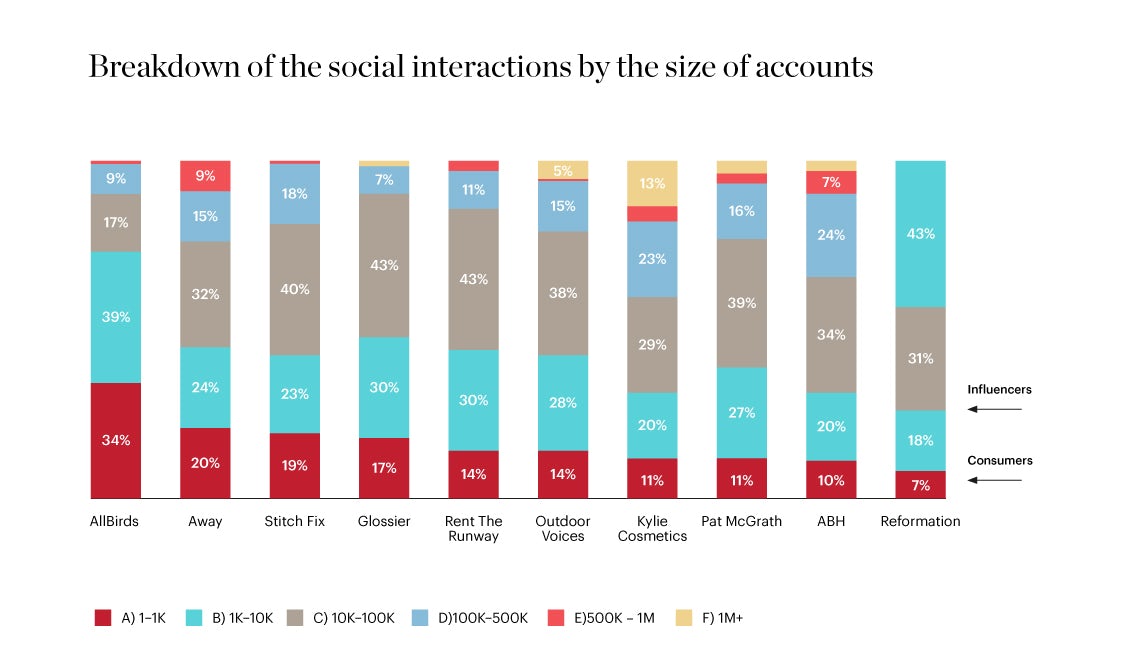 Consider the health of the category, not just the brand. Startup founders like to talk about filling a “white space” in the market. In order to figure out whether or not they’re actually doing it, investors will sometimes hire data analytics firms to analyse movement in a particular category. For instance, in 2017, Preen.me conducted a study of social media conversations around eyebrows. The numbers of users posting about eyebrows started to slow at the end of 2017, about three years after the term “eyebrows on fleek” peaked on Google search, indicating that it might not be the best time to launch a new brand in the category.

Influencer-driven likes and sales are unreliable indicators of future success. Influencers can provide a boost to followers and drive conversions, but the effects are usually short-term. Instead, analysts urge investors to pay attention to follower engagement. For instance, while Outdoor Voices has a relatively low number of followers on Instagram — around 335,000 — the conversation is growing, the audience is engaged and the brand generates a high percentage of social interactions per post. That’s all despite the fact that almost half of its posts are generated by consumers with 1,000 followers or fewer, according to data compiled by Preen.me. 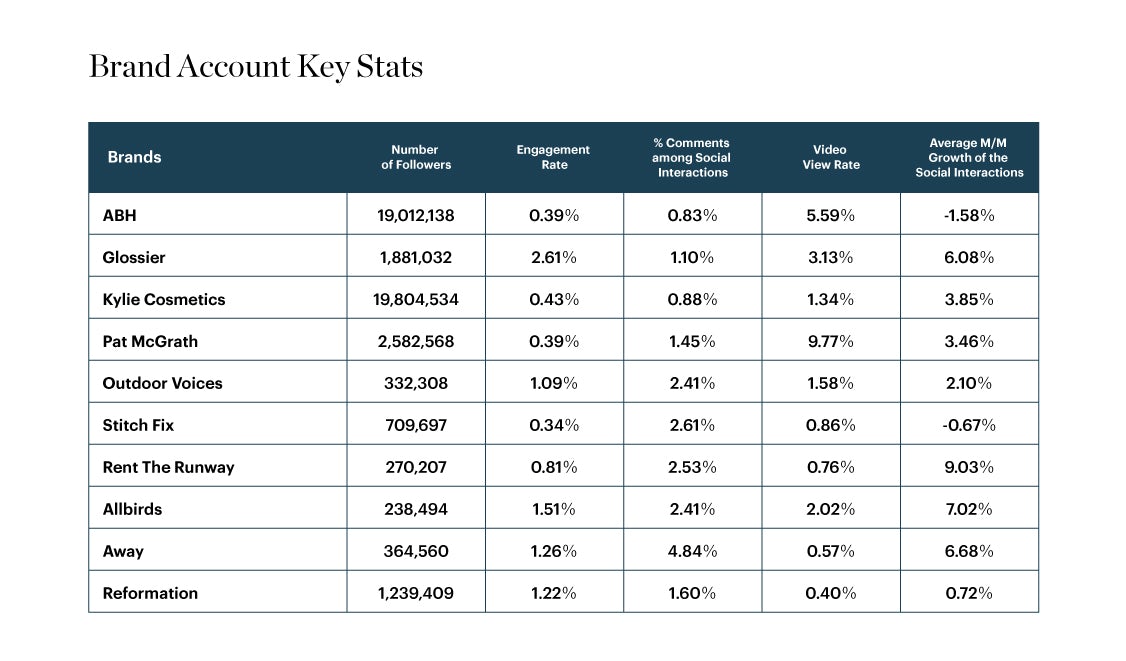 Figure out if the community is having conversations that go beyond the actual product. Look for companies that can hold a conversation online about issues that pertain to, but aren’t directly about, the product they’re selling. “I would point to companies that generate a different kind of viral excitement,” said BBG’s Lyne. For instance, sexual health brand Lola — one of BBG’s investments — only occasionally posts photos of its actual product. Instead, it has focused on creating a conversation around why the products exist, including a series where employees share personal stories about their first periods.

“They made effective content marketing early on about something women wouldn’t have been proud of in the past,” Lyne said. “I think you have to dig under the covers and not just look at the number of followers or likes.”

Evaluate the conversation happening off the brand’s designated accounts. A brand’s own social media presence is only one indication of social health. What’s often more interesting is what’s happening outside of those official channels, which can be gleaned through hashtags and product tags. “A real action is organic users tagging the brand,” Klein said. “That’s influence.”

Ideally, brands can juggle both. While 70 percent of the consumers posting about Glossier have 1,000 followers or fewer, with much of the conversation is happening off of its own platform and outside of the influencer echo chamber, the brand also has extremely high engagement on its own platforms — 6 percent month-over-month, according to Preen.me — indicating that it serves as its own best ambassador.

The Dark Side of Social Media