Women and girls recently released from ISIS captivity, wearing the same clothes the day they were kidnapped, were taken shopping in Iraq by Khalsa Aid to help rebuild their lives and dignity.

Women and girls recently released from ISIS captivity, wearing the same clothes the day they were kidnapped, were taken shopping in Iraq by Khalsa Aid to help rebuild their lives and dignity.

DOHUK, Iraq — The persecution of the Yazidi religious minority from Iraq’s Sinjar region has been deemed a “genocide” by the United Nations and world governments. As of May 2017, over 10,000 members of the ethnically Kurdish community have been killed or kidnapped by the Islamic State (ISIS), while over half a million are estimated to be displaced from their homes, now living in camps.

Most of them are women and young girls, who were sold into slave markets in Syrian governorates. Targeted as “devil worshippers,” they were held by ISIS fighters for months, sometimes years. The men were rounded up and brutally killed, as commonly occurs during the first stages of ethnic cleansing.

Almost four years after the jihadist group first seized parts of the country, Iraq's government announced in December that its war against ISIS was over. And earlier this month the US-led coalition said 98 percent of ISIS territory across Iraq and Syria has been recaptured. The Yazidis who survived the atrocities must rebuild their lives from scratch and do so against all the odds.

Khalsa Aid International, a UK-based charity founded in 1999 that has worked in the Yemeni civil war, the Greek refugee crisis and the Haiti earthquake in 2010, is taking 200 Yazidi young women shopping for clothes in Iraq. Many of them have been released from ISIS captivity as early as one week ago, still wearing the same clothes as on the day they were kidnapped. 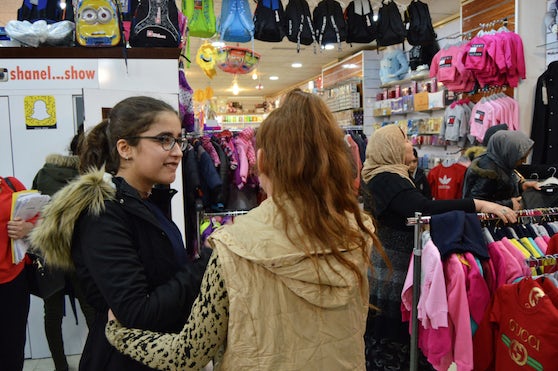 Among them is Hannah, a 15-year-old girl who fled captivity in Tal Afur last month, recounts Savraj Kaur, a coordinator of Khalsa Aid’s Iraq mission. The daughter of one of the drivers who works with Khalsa Aid on its monthly food drops — who himself frequently helps young girls and women escape slavery — she was taken as a slave with her mother. But she successfully fled and returned to Dohuk, an Iraqi city that is home to dozens of camps for internally displaced people.

Another girl was released just four days ago. She is eight years old. Others returned a month ago, at the bounty price of $60,000 per head, which families had to raise by any means available.

Providing food and shelter was a priority.The charity has been providing food packs since they came to Iraq in 2014, while a lot of the girls come back to families who are living in camps or unofficial settlements.  Hannah was one of the 200 girls that Khalsa Aid took clothes shopping on January 22 and while this may sound trivial given what they have endured, it is in fact a necessity.

“When I came to Iraq in 2016, a lot of the girls started returning to their families, and a lot of them had escaped ISIS, and had no possessions,” said Kanwar Singh, a coordinator of the Iraq mission. “One of the things they always asked for was clothes, so what we wanted to do was give them the freedom of choosing the clothes themselves.” Picking their own attire offered women autonomy and a renewed sense of control after having it forcibly ripped away.

It’s such a new experience — they’ve never been given the choice or freedom.

By partnering with a local shop that sells both traditional Yazidi clothing — Dohuk is a Kurdish city, so Yazidis remain a minority within a minority — and modern apparel like denim, underwear and even makeup, the aim is also to also support local businesses who bear the brunt of the influx of refugees.

The girls, aged eight to 32, were at first weary, nervous and unsure. “It’s such a new experience — they’ve never been given the choice or freedom,” said Singh. “They will pick things up and ask ‘Can I have this? Are you sure?’” But it soon became a comforting experience. Girls who shared a single thing in common, a gruesome experience, bonded over clothing and accessories.

“You had to be here to see it,” Singh recalls. “There were a couple of girls who used this as a socialising event, comparing their choices and trying piles of clothes on.” Hannah, the driver’s daughter, was among those trying on clothing, shoes and handbags, laughing with her new friends.

As a global industry worth over $2 trillion, some would argue that fashion has a responsibility to help more in tragic situations such as these, especially when small charities lead by example. “We reached out to the industry as we knew it would be a great collaboration to suit any reputable company [including] corporate funding partnerships for the shopping programme,” said Kaur. “We encourage leaders from brands who are interested to reach out, and — where a partnership arises — take part in visiting the girls with us. This is the benefit of being a grassroots, direct response organisation.”

What Fashion Can Do to Address the Crisis in Syria