Esquire Taught Its Readers 'How to Be a Man.' But That's Never Been a Harder Question to Answer.

Michael Sebastian, editor-in-chief of the Hearst-owned American men’s magazine is grappling with how to honour the brand’s heritage while appealing to a modern audience. 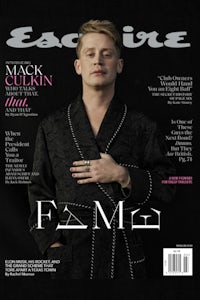 Esquire Taught Its Readers 'How to Be a Man.' But That's Never Been a Harder Question to Answer.

Michael Sebastian, editor-in-chief of the Hearst-owned American men’s magazine is grappling with how to honour the brand’s heritage while appealing to a modern audience.

NEW YORK, United States — Men’s fashion magazines have tried everything in their pursuit of Millennial and Gen-Z readers, who prefer sneakers over loafers, sweatpants over suits and Instagram over glossy print publications.

GQ has embraced casual cool under Editor-in-Chief Will Welch; its most recent cover featured comedian Larry David in his signature normcore sweater and sneakers. Now, Esquire, its uptown rival, is betting there’s still an audience — at least one under 50 — that still wants their clothes tailored, even if they’re designed by Virgil Abloh.

The Hearst-owned American men’s magazine — the preferred title for those who like their cocktails shaken, not stirred, the home for literary legends like Ernest Hemingway and where, in 1966, Gay Talese created the modern celebrity profile with “Frank Sinatra Has a Cold” — underwent a masthead shakeup last year.

The magazine’s digital director, Michael Sebastian was named editor-in-chief last summer. He commenced a redesign to reimagine Esquire for a modern reader, casual dressing and all.

“We’ve had several members of staff, mainly on the digital side, that are steeped in streetwear and steeped in clothes that aren’t just suits and turtlenecks. They brought that energy to the website, and we’ve been trying to bring that energy to the magazine as well,” Sebastian said in a glass-enclosed conference room on the 21st floor of the Hearst Tower in Manhattan.

Fashion media, and legacy publications in particular, have been searching for the proverbial lifejacket in an industry caught in a sea of disruption. Esquire, likely one of Hearst’s more profitable titles, is of no exception. A spokesperson for Hearst said that Esquire is the biggest men’s site on the internet by unique visitors, with more than 20 million visitors, up 156 percent year-over-year; Esquire’s total print and digital circulation is more than 709,000, compared with 942,739 at GQ.

Sebastian, 39, embodies the magazine’s new high-low mix, wearing a navy sweater, striped blazer and a Charlie Brown watch with a Dior x Stussy metal water bottle in front of him. Still, he sees the fashion winds shifting back in Esquire’s direction as streetwear’s dominance begins to wane (at the very least, on the runway). He said that, plus a commitment to robust journalism heavy on feature writing, equals a winning formula deep into the hypebeast era.

It helps that some of streetwear’s biggest icons, from Abloh to Kim Jones, have shown an emphasis on tailoring in recent collections for Louis Vuitton and Dior Homme, respectively (not to mention having prophesied the end of the era themselves).

“The interesting thing is, Nick [Sullivan, Esquire’s creative director] and I were just in Milan and Paris for men’s fashion week, and so many of the runways… were tailoring and suiting. That’s a good place for Esquire.”

While Esquire, which launched in 1933 as a literary and style magazine, may have addressed the streetwear crowd in its editorial over the last few years, it never did so in a way that outshined its primary competitor, GQ. The Condé Nast rival has spent the last year aggressively courting menswear nerds, while its editors are fixtures both in the fashion circuit in real life and online. All the while, scrappier, digital-only competition like Hypebeast and Highsnobiety continue to carve out their own market share.

Sebastian joined Hearst from Advertising Age in 2015 as a senior news editor, and oversaw much of the company’s digital content. In 2017, Sebastian moved to Esquire to work as digital director, and by 2019, he was leading both the print and digital teams.

The merger of once-siloed digital and print teams last year led to layoffs, with then-editor-in-chief Jay Fielden departing via a hyper-choreographed Instagram post, which couldn’t be further from how Sebastian operates on social media platforms.

“Michael is a news guy, which has been the tempo of the brand for some time now, but he’s just incredibly calm and cool,” said Kate Lewis, chief content officer of Hearst Magazines. “Michael wholly understands that special mix of representing the best of the tradition of the brand and being on the lookout for curveballs and opportunities the changing media landscape may throw at you.”

So far, Esquire’s new strategy is two-pronged, beginning with the redesign which puts back into focus the brand’s literary roots and opts for issues based around a theme rather than seasonality. (There will still be summer fashion stories in the summer issues, of course.) Sebastian said that the magazine’s approach to photography and art direction is something he also plans on refreshing, making the art “feel more of right now.” (Think: fewer overstyled shoots and high-profile photographers, something his predecessor preferred, in favour of, say, skateboard photographers.)

The latest issue features Macauley Culkin on the cover, granting Esquire his first in-depth interview since the early 2000s for an exploration into modern fame. (Culkin wears a Dolce & Gabbana robe on the cover, a choice that was less about the contentious designer brand in the midst of its PR revival and more about alluding subversively to scenes from Culkin’s breakout role in Home Alone, Sebastian said.)

Kelly Stout, the magazine’s articles director whose resume includes Jezebel and The New Yorker, is one of Sebastian’s hires who he feels can help the magazine revive its literary richness.

“When [Stout] was interviewing for the job, she told me something that resonated. She said, ‘my parents didn’t want me to read Esquire when I was growing up because it felt dangerous to them,’” Sebastian recalled. “Not in the way if you were a young man you couldn’t read Playboy because there was nudity. It was because of the ideas that were in it. They were afraid she was going to read Esquire and have these subversive ideas, and that’s definitely something I want to bring back to the magazine.”

“This is a magazine for adults, by adults,” Sebastian said. “Let’s be honest and talk to them in a very honest way and write about topics that are edgy.”

As for the style section, Esquire veteran Jonathan Evans leads coverage as the magazine’s style director. “The guiding principle we have [for style] is we want to make sure if we recommend you wear or buy something, you’re not going to look back in five years from now at a picture of yourself and think, ‘what the fuck was I thinking?’” Sebastian said.

Of course, money-making market stories like those with affiliate links, a common template in fashion media today, sit alongside Esquire’s budding e-commerce business, which the magazine said generates around a $1 million in sales a month. Among Esquire’s other monetisable products: The Big Black Book, a twice-annual supplemental style manual that costs $12.99 and has a circulation of about 155,000; an editorial partnership with reservation booking service Resy highlighting new restaurants across the US; a handful of licensing deals, like one with IMG for the "Esquire Edit" for the brand's UK version, which spans across men's fashion jewellery, eyewear, and dress shirts."

One product in particular — the Charles P. Pierce politics news subscription programme, which costs $17.99 per year and was among the first of its kind at Hearst — is a sort of micro-membership model within the magazine itself compared to Esquire’s larger subscriber base, said Sebastian, and a big test for the brand and Hearst. The subscription programme has 12,000 subscribers, up from 10,000 since November, with the potential to grow even more given that it is an election year in the US. The company said Esquire is a profitable title.

Still, the magazine’s battle for readership in an ever-fragmented industry is hard fought. Sebastian said he hopes Esquire publishes a story daily, whether in its magazine or online, that is “in contention to be what everyone is talking about that day,” though it might require him to take chances on features that other editors have passed on.

In 2018, two writers at Esquire reported an investigation into Hollywood director Bryan Singer’s alleged history of sexual assault and misconduct, but Hearst passed on the story. (It was later published in The Atlantic.) A story in Esquire’s March issue, which takes a critical look at how Elon Musk’s SpaceX is dismantling a Texas town, is one that might very well make the kinds of waves the title needs to generate conversations again.

“There’s a language that magazines speak that is entertaining and informative but also feels not real,” Sebastian said. “That’s the artifice we want to strip away.”

Editor’s Note: This article was revised on February 13th, 2020. A previous version of this article misstated that this is the first issue under editor-in-chief Michael Sebastian. This is incorrect. It is the first issue under Sebastian's redesign. The story also misstated that Nick Sullivan is the fashion director. He is instead the creative director overseeing the magazine's fashion coverage.