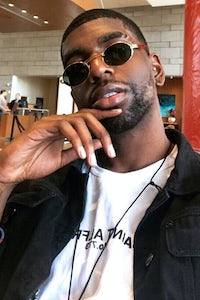 LONDON, United Kingdom — Farren Fucci, 25, is the first to admit that his career has been enabled by the internet. In fact, the South Carolina-born stylist — known for his unique blend of hyper-sexualised sci-fi and ’90s-era “hoesthetics”, as he calls it — could be one of the most successful young creatives to parlay his virtual relationships with high-profile celebrities into editorial work for major magazines, casting and styling jobs for marquee brands.

Fucci, whose pseudonym is a riff on “fake Gucci,” is still rising through the ranks of the industry. He is perhaps best known for the two Paper magazine covers he styled: Bella Hadid in December 2016 and Rihanna in March 2017. But he got his start by becoming a fashion commentator on Twitter while working in customer service. In addition to his witty observations on red carpet fashion and paparazzi shots, he made product collages on Polyvore. “I was living in such a small town and we didn’t have showrooms or models and I couldn’t take time off work, so it was my way of showing people what I love,” he explains. “It took off because it was so unique.”

Eventually Rihanna began following him. So did Bella Hadid and industry insiders like Paper magazine’s Kim Hastreiter. The turning point came when he pitched Hastreiter a fashion story starring Hadid, then a rising star; the Rihanna story swiftly followed. For the latter shoot, Fucci created a “ratchet” ghetto-fabulous look (lilac ponytail, Dior-branded bra straps, gold chains and candy-flecked Chanel tweed). For the Hadid story, Fucci went for platinum blonde, slicked-back hair and plenty of flesh on show — a “vampire princess”, he says. Fucci’s is a quasi-pornographic vision that appeals to a generation of youth who consider nude selfies “empowering” and “slut-walking” a form of political activism. “I would consider it like avant-garde streetwear mixed with a little erotica,” Fucci says, describing his overarching aesthetic, which he says stems from his childhood love of video games. “I like to use things like latex but at the same time I like to put glasses on a flight jacket and tear away sweatpants, or matching tracksuits with heels, or sneakers with dresses. I just consider myself to be very much a streetwear-meets-erotica-dominatrix kind of deal.”

In the hands of someone else, Fucci’s vision of Rihanna might have veered towards fetishising low-income black people. In 2012, Vogue Italia famously came under fire for exactly that with its “Haute Mess” story. Fucci calls his African-American heritage the “essence of his life” and acknowledges it’s an important part of his creative outlook. “The most problematic thing about it is that we don’t have enough absolutely black representations of ourselves,” he asserts. “People are constantly using other races to do things that our race is known for and we don’t even get to do them ourselves, which is a slap in the face. We barely have any representation and on top of that, when we are represented it’s usually a caricature.” The team behind the Rihanna shoot was predominantly composed of people of colour, which he says made it special.

I would consider it like avant-garde streetwear mixed with a little erotica.

In June, Fucci was enlisted by Dolce & Gabbana to add what he calls “black boy magic” to its Spring/Summer 2018 menswear show, which ironically riffed on the hashtag “Boycott Dolce & Gabbana” (a mocking nod to virtual commenters who have berated the Italian brand for its support of US president Donald Trump). Alongside himself, Fucci enlisted Atlanta-based musician Raury, who took the spectacle to a whole new level of irony, answering the Italian brand’s provocative slogans that appeared in the collection with a protest of his own during the finale of the show.

Fucci, who is set to help style and cast Dolce & Gabbana’s next womenswear show, took to social media to defend the designers. “It’s kind of hard for me with that little rock between fashion culture and black culture,” he explains. “The way I see it is that Dolce & Gabbana is trying to make a change and trying to be a little bit more diverse... I understand why he did start that protest but at the same time I feel like there’s other ways you can fight; he chose to do it by protesting on the runway whereas I am choosing to become a more renowned black voice in history.”

The stylist says that what he loves most is making his childhood ideas come to life, citing the cinematic references that shaped him, including “The Fifth Element” (1997), “Buffy the Vampire Slayer” (1997-2003), “Resident Evil” (2002), “2 Fast 2 Furious” (2002) and “Catwoman” (2004). “Most of my ideas come from ideas that I’ve had since I was like six years old and collected from that time up until now,” he says. “I was pretty much a loner and very quiet and I was always writing in my book and playing video games or in my room just creating my own world. I don’t think I’ll ever run out of ideas because there won’t be something that I haven’t thought about before because I’m constantly creating in my mind.”

His ambitions are certainly big. Fucci, who was once homeless after coming out as gay to his conservative parents, says one day he’d like to have his own brand — “something like a Rihanna or a Kanye or a Jay-Z” — that encompasses fashion, music and even philanthropy. “I want to be an influencer in all those things,” he says. “I’m not even close to my end goal, but the strides I am making are monumental,” wrote Fucci in an Instagram caption in June. “Please use this as a means to know that you should never give up on yourself and your dreams, but instead prepare yourself for them... I wish everyone success, and want to make you guys as proud as I can.”