The Power of Disruptive Thinking

“Disruptive Thinking” was the title of a talk by Luke Williams, a fellow at global innovation firm Frog Design, author of Disrupt, and one of the event’s most interesting speakers. Beginning his talk by tracing the origin of the word “competition” to the Latin word competere, meaning to “sit together,” Mr. Williams implied that competitors are a group that’s agreed to appear at the same time and play by the same rules. Competition leads to incremental change, while real innovation is about “disruptive thinking” that breaks previous patterns of thought, he said, identifying Red Bull, Zipcar and Seinfeld as examples of innovative products that challenged fundamental assumptions in their respective markets — soft drinks, rental cars and sitcoms — and earned tremendous success.

The Power of Listening 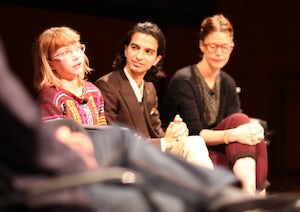 A panel of fashion bloggers including Tavi Gevinson, Lauren Sherman of Fashionista, Christene Barberich of Refinery 29, and BoF’s own founder and editor-in-chief Imran Amed — a group that instinctively understands the conversational nature of digital media — first raised the importance of having immediate feedback from the consumers of their content. “I know within minutes if a story is successful,” noted Ms. Barberich. “You have to listen.”

The ability to digitally listen, respond and nurture a one-to-one relationship with the consumer is going to transform the way companies do business, ushering in a “thank you economy,” said Greg Vaynerchuk, a self-trained wine expert and social media consultant to companies like Google and Disney, who gave one of the most compelling presentations of the conference. “The next battleground is caring,” said Mr. Vaynerchuk, who has earned over 850,000 followers on Twitter (@garyvee) and attracts over 90,000 viewers per day to his wine-focused webcast, “simply by responding to Twitter queries.”

Indeed, Mr. Vaynerchuk declared search.twitter.com to be “the most important site on the internet today” because it enables anyone to monitor and respond to what millions of real people are saying in realtime about a particular brand, business, category or topic. It’s about the “humanisation of business,” he emphasised. Success will come through “outcaring everyone.”

But listening is not just about gathering tactical feedback and cultivating more caring relationships with consumers. Carefully monitoring and engaging in conversations with and amongst consumers is essential to implementing the kind of iterative innovation strategies that, paired with disruptive thinking, are most likely to succeed in today’s increasingly unpredictable market.

The Power of Iterative Development

“Predictability is at an all time low,” said Frans Johansson, an entrepreneur, author of The Medici Effect and another of the day’s most dynamic speakers. “A predictable path to success does not exist,” he said. Rather, a more reliable way to innovate is to look for new ideas in unpredictable places, then take an iterative approach to developing them, advised Mr. Johansson. That means being flexible enough to take the “smallest executable step” towards a goal, then test, learn and repeat — an approach that’s largely inspired by Agile software development, an adaptive process that emphasises customer collaboration and responsiveness over strict road maps and plans.

Mr. Johansson illustrated the principle with the example of the Ice Hotel in his native Sweden. Interestingly, he explained, the world’s first ice hotel was initially conceived as an “ice exhibit” and later became an event and exhibition hall for artists. It was only when visiting backpackers could not find a room in the local town and asked permission to spend the night in the exhibition hall, placing their sleeping bags on top of reindeer skins, that the idea for the ice hotel was born.

Later in the day, a panel entitled “The Elevator Pitch” highlighted a group of bright young entrepreneurs who were putting the power of disruptive thinking, listening and iterative development into practice.

Jenn Hyman, co-founder and CEO of Rent the Runway, presented her event-focused, “Netflix for fashion” service that’s notable for selling fashion as an experience, not a product. Interestingly, as the startup grew, Ms. Hyman realized that her service was proving to be a great way for consumers to sample brands they might later buy and, consequently, a powerful customer acquisition channel for traditional online retailers like Neiman Marcus, an area of the business she is planning to expand.

Katia Beauchamp and Hayley Barna, co-founders of BirchBox, presented their subscription sampling service for beauty products. The company delivers a box of beauty samples to paying members once a month, a concept based on the insight that, in the beauty business, there is a strong correlation between sampling and sales, especially if the samples are well curated and accompanied by compelling content.

The last “pitch” was from Vivian Weng, co-founder of FashionStake, a company whose startup diaries have appeared on BoF over the last few months. Since launch, the company has embraced change and learnt to iterate, significantly revising their original business model based on consumer feedback. Their new concept flips the traditional flash sale model on its head, allowing consumers to pre-order fashion for a substantial discount, while helping the emerging designers they carry to cut inventory and storage costs, fund production and better optimise supply and demand. But whether they can make this new model work remains to be seen.

The current explosion of digital fashion innovation is driving the continuous creation of exciting new businesses, but according to Mr. Johansson, “the average lifespan of a company is getting shorter and shorter.” No matter how compelling the initial concept may seem, the most successful startups will be the ones that measure everything they do and are agile and lean enough to evolve quickly as fresh evidence emerges.

Thanks to Mike Matas for the insipring images and video of the day. Vikram Alexei Kansara is Managing Editor of The Business of Fashion