OXFORDSHIRE, United Kingdom — “In Europe, not being diverse is not a problem for us.” This is the refrain heard all too often by American casting director James Scully. “We have black and Asian casting directors being told not to cast black and Asian models to their face,” said Scully, adding that a prominent photographer once said to him, point blank: “I don't shoot blacks.”

This was not always the case. “I work in a business I no longer recognise,” said Scully, as he spoke on the stage at VOICES, BoF’s annual gathering for big thinkers, to make a brave, bold and emotional plea for reform, calling out the overt racial discrimination that is rife in a modelling industry that feeds the fashion shows and advertising campaigns of major publicly-traded companies.

But racial discrimination is only one facet of the abuse regularly suffered by models in a system that treats “girls” as nothing more than goods, said Scully, as he sat alone in a chair, giving his testimony before some of the fashion industry’s most powerful business leaders and a wider audience of thousands watching the talk online via a live stream.

Scully described a modelling industry that hires girls when they are little more than children and then disposes of them when they hit puberty in a power game where models are mere pawns, often surviving for months at a time on little more than "Adderall and Red Bull".

It’s time you really investigate what these people are doing on behalf of your company.

“We've become desensitised to the way we treat these girls and just discard them. It's so much more sadistic and so much more mean than you can believe. We have to support girls more and stop treating them like Tinder swipes,” Scully said, adding: “I came into this business to dream. I miss the magic.”

“This business for me, which was built on the celebration of beauty and diversity of women, has totally been hijacked by a small group of stylists, casting directors and photographers, who not only seem to dislike women, but go out of their way every day to prove that on a daily basis,” continued Scully.

Scully’s message struck a chord with top model Amber Valletta, who, in a conversation with BoF’s editor-at-large Tim Blanks the following day, lent her support to the casting director, saying she recognised the abuses he described only too well.

Addressing fashion’s largest companies, Scully issued a call to arms: “It’s time you really investigate what these people are doing on behalf of your company,” he added.“It’s incredibly unprofessional and petty and ridiculous and an insult to the person who actually hired you to do your job.” 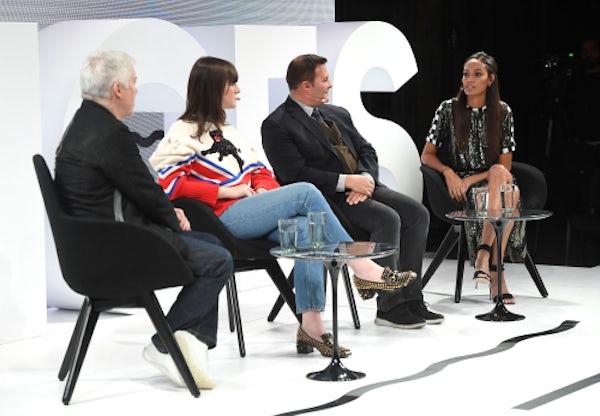 Scully’s talk was followed by a panel discussion on diversity and inclusion between president of IMG Models Ivan Bart, mixed-race model Joan Smalls and transgender American actress and model Hari Nef. Smalls and Nef spoke frankly about their own experiences of the prejudice and discrimination rife in the fashion industry and urged those in the audience to rethink their limited perceptions of beauty.

“You should be reflective of the world you live in,” said Smalls. “I look at this crowd, beautiful faces from different backgrounds and that’s the world I see. So when I see a runway with all the same models that are just cloned, I’m like: ‘Is that your beauty? Is that your world?’ It’s very one-sided and bland. Brands have to be more open-minded when they choose their cast; they hold a responsibility to represent consumers.”

“There needs to be a greater awareness of who wears the clothes,” echoed Nef. “The fashion industry fetishises diversity,” she continued. “It’s like ‘diversity day’ — but that never means a blue chip campaign or a big contract.”

The fashion industry fetishises diversity. It’s like ‘diversity day’ — but that never means a blue chip campaign or a big contract.

“Fashion is a powerful industry with a real clout, in terms of informing the public on what is beautiful, what is sexy, what is clean, what is aspirational,” Nef continued. “If you do your homework, you can send extremely positive and empowering messages to a consumer base that is waiting for you to tell them who’s OK.”

Earlier in the day, DeRay Mckesson, an American civil rights activist and a leading voice in the Black Lives Matter movement, and British television personality June Sarpong also took to the VOICES stage to discuss the matter of racial injustice in the wider world. 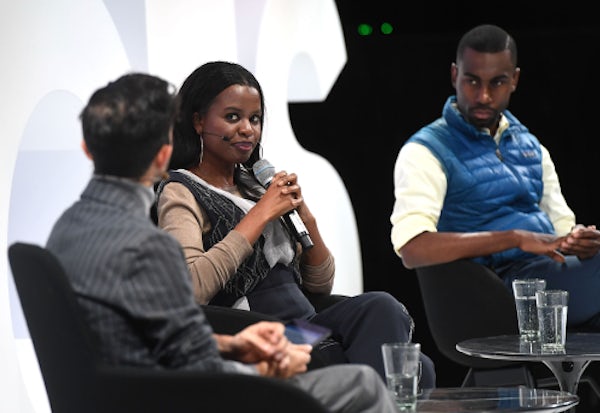 “The goal is acceptance, it’s not tolerance. Tolerance at best is one of the pathways to acceptance,” said Mckesson. “These are not new issues, they have always been under the surface but in the age of social media and technology, we’re able to talk about these things in public and [now] people understand that they are not alone in dealing with them and that’s what's new in this moment.”

On the role of the fashion industry, Mckesson said: “It’s not enough for you to just slap 10 more black people on the covers of your magazines or put them in ads.”

With the rise of emerging markets, “there is a new normal” of greater racial diversity that needs to take shape, added Sarpong. “If fashion is going to thrive, and survive, it has to adopt that and adapt to that. Diversity is good for business. This isn’t about what’s politically correct or the right thing to do. It’s also good for your bottom lines.”

Asked about one key action she would take were she a professional working in fashion, Sarpong said she would put a 95 year old woman on the cover of Vogue.

Between the Catwalk and the Consumer: Fashion’s Growing Diversity Gap
To Have and Have Not: Inequality Hits Luxury
Op-Ed | Diversity In Fashion Advertising Does Sell