NEW YORK, United States — Alessandra Steinherr, a beauty editor with nearly two decades of experience in magazines, doesn’t see herself as a social media influencer. Her 167,000 Instagram followers might disagree.

Steinherr’s feed is full of images and videos of the new products that come across her desk; her tips and recommendations; even her own skincare and makeup routines. Until March 2018, she took followers behind the scenes of her job as associate creative and beauty director at Glamour UK. After 11 years at the title, she left to focus on freelance writing, consulting and — thanks to her following — sponsored content “ambassadorships” with brands such as Estée Lauder and Avène.

Steinherr’s story is becoming more common, though many have also retained their day jobs. A growing number of fashion editors have grown their social media presence from hobby to side hustle, boosted by the insider perspective afforded by their positions. “I don’t try to emulate other people,” says Steinherr. “I am an expert. That’s how I’m different.”

The influencer-editor now occupies a new place in the fashion media establishment, where bloggers and social media stars have fought for acceptance. As recently as 2016, a Vogue.com editors’ recap of Milan Fashion Week went viral for its sharp-tongued take on the social media-driven street-style hoopla outside fashion shows.

But the competition has become more intense and many editors have realised the value — both financial and career-boosting — in cultivating personal followings, seeing their day jobs as a natural launching point for social media stardom, as a behind-the-scenes look at the world of glossy magazines — a milieu that has inspired movies and television shows — has proven to attract online audiences.

“The perception of a magazine job is still the ‘dream job,’” says Maria Dueñas Jacobs, the director of brand development at Stitch Fix and former accessories director at Elle, where she attracted followers with frequent posts from jewellery market appointments and fashion shows. “I saw it as a huge opportunity to build this following, to connect with people,” she adds. “Some people were starting to understand that editors were the first influencers.”

Like Dueñas Jacobs, many fashion editors fall into the category of “micro-influencers” with anywhere between 10,000 to 200,000 followers, sizeable but a far cry from celebrities such as Kim Kardashian, who has tens of millions. But what they lack in raw follower counts, they make up for with the highly engaged nature of their fans, an important measure for advertisers.

When former Elle.com beauty director Julie Schott moved from the title’s magazine division to the website in 2015, she found that her digital media colleagues were sharing every market appointment and event on social media. Schott started posting makeup tutorials and recommendations on Snapchat and became more active on Instagram, where she now has over 44,000 followers. Schott is now a freelance writer and consultant, and also promotes brands on Instagram.

The competition has become more intense and many editors have realised the value in cultivating personal followings.

Others attract bigger — if not quite Kardashian-level — followings. Eva Chen started building her now 871,000 strong Instagram following — making her one of the most recognisable names in fashion — as a beauty editor at Teen Vogue. She was one of the first editors-in-chief to embrace social media when she led Lucky between 2013 and 2015, and is now the head of fashion partnerships at Instagram.

International Vogue editor Suzy Menkes, who also does not monetise her following, uses Instagram to post the personal images she takes while reporting, a practice that grew out of her habit of carrying her personal camera on assignment with the International Herald Tribune earlier in her career. She is one of the most active people on the platform in the industry and counts more than 379,000 followers. “This side of my character did not come through in all those years at the International Herald Tribune, when you were never supposed to show personality,” she says. Menkes has even broken news with her backstage-access images.

Menkes’ non-commercial stance aside, the rise of the influencer-editor has certainly benefited brands, which see them as another weapon in their marketing arsenal. Fashion and beauty brands have long showered editors with free products to build goodwill and vie for coverage, giving them access to products or collections before they launch, or the ability to write about trips or experiences their titles wouldn’t be able to afford otherwise. In the last two to three years, brands have begun making sure product is properly tagged and have been explicit about their social media expectations for press trips and other events. 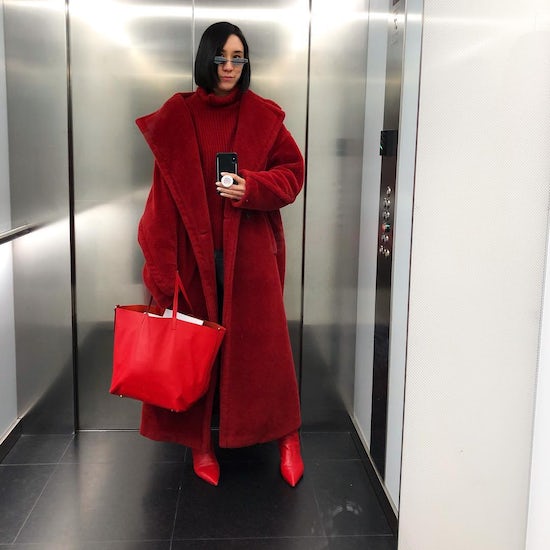 Publications benefit, too, often enlisting influencer-editors to host events for brands on behalf of the magazine, appear in television segments or do consulting work. Hearst Digital Media now pays editors who participate in sponsored content, according to employees at the company. (A representative for Hearst did not comment.) But many media companies are apprehensive about being cut out of advertising deals.

Schott says that when she has posted on social media that beauty brands used excess and wasteful packaging in their mailings, some brands made clear they were not happy and threatened to stop sending her products.

Lindsay Peoples Wagner, fashion market editor at New York Magazine’s The Cut, says Instagram is an important way to show the industry what she is reading, writing and styling, but she is careful not to get swept up in it.

“The pressure — whether it be from brands or because everyone else is doing it — has increased,” she says. “You want to get your follower number up, you want brands to think of you when exclusive stories come up... It’s not for me.”

Things get more complicated when editors start accepting direct payment for posting sponsored content. For many, it is an easy supplementary income, generally garnering anywhere from $500 to $1,500 per post, depending on the brand and size of following. And as magazines cut staff and costs as print readership declines, that extra income is worth the hassle for many editors.

Some editors say they ask their managers before agreeing to appear in a campaign or post sponsored content. Others say they often agree to work with brands and ask for forgiveness afterwards, especially if the brand is from outside their beat.

Steinherr did not ask for permission from Condé Nast to sign with the agency Storm Models in 2016, but she informed them afterwards and says the company was always supportive of her partnerships with third parties, which she identifies with “#ad.” “I have my own code of conduct,” she says. “I don’t find it difficult because I’m used to it — to say this is editorial, this is advertising — to me, there are no blurred lines.”

Companies are starting to formalise rules for editors who wish to commercialise their social media platforms.

Spokespeople for Condé Nast and Hearst declined to comment, but both companies are starting to formalise rules for editors who wish to commercialise their social media platforms, according to people familiar with the matter. InStyle’s editor-in-chief Laura Brown says she evaluates employee requests on a case-by-case basis. “The landscape is shifting so fast, and people’s personal brands are important, so you need to do what is appropriate for your business,” says Brown.

“When deciding if, at the time, it was the right moment for me to leave my job as an editor, the personal opportunities I was getting offered definitely played a part,” says Lauren Chan, who was US Glamour’s fashion features editor until the end of 2017. “Those influencer gigs gave me confidence that people would want to hire me elsewhere — and they’re the reason I was able to afford to take the leap.” She booked 20 “influencer jobs” before exiting the title.

Laurel Pantin, the editorial and fashion director at Coveteur, a digital media publisher, started attracting social media followers when she was Eva Chen’s assistant at Teen Vogue six years ago. She signed with The Wall Group in 2014 when she became a freelance writer and stylist and has since worked on social media projects with American Express and Nordstrom.

“In the beginning, it was really lax because there weren’t a lot of these things popping up,” says Pantin about getting permission from her employers. “Then it became really strict, because a lot of people were getting more opportunities.”

Despite the potential for conflict of interest, many publications view being “good at social media” as a valued skill for traditional editorial jobs — and a differentiator in job considerations. “Instagram has helped me in my career in a really big way,” says Dueñas Jacobs. “When I was ready for my next career challenge and to join Stitch Fix, I was grateful for the following I had built. It put me in a position to change careers, it was something that was an added plus.”

Pantin says it’s important for editors to consider their social followings and knows it is something employers value, especially smaller digital brands that need to maximise their reach. But it shouldn’t take precedence over an editor’s skills, she says. “It’s more important to keep your eye on the quality of your work.”

“Your reputation is always going to take precedence over your following.”