In the run-up to the Rio Olympics, magazines across the world are featuring athletes in a fusion of fashion and sport. Meaningful tribute or superficial spotlight?

In the run-up to the Rio Olympics, magazines across the world are featuring athletes in a fusion of fashion and sport. Meaningful tribute or superficial spotlight?

Called “Fighting Talk,” Sheffield’s recent feature of British female champion boxer Nicola Adams is just one of the many examples of glossy magazines around the world giving Olympic athletes a spotlight in recent months. In the run-up to the 2016 Summer Olympic Games, kicking off in Rio de Janeiro this weekend, publications from the Chinese and Swedish editions of Elle to the Brazilian and Australian editions of Vogue have showcased an international constellation of top athletes , through a variety of narratives.

Whether portrayed as heroines who have beat the odds, gladiatorial icons decked out in on-trend activewear brands or muscular heartthrobs posing with slinky fashion models, these editorials are a testament to the increasingly interconnected nature of sports and fashion. According to Mike Christensen, managing editor of GQ Australia, they are also a good way to boost engagement and the publisher’s bottom line. “Olympians show the kind of dedication and raw talent that inspires readers,” he says.

These editorials are a testament to the increasingly interconnected nature of sports and fashion.

While Olympians like Serena Williams, Usain Bolt and Jessica Ennis-Hill are already household names, a new generation of social media savvy athletes are being tapped as valuable marketing tools for lifestyle and sporting brands, indicating an industry-wide shift towards authentic spokespeople with more than just good looks.

It comes at a time when athleisure is dominating casualwear; the fashion industry is increasingly hybridising with health and fitness; and fashion’s ideal female body type is being redefined as the more toned, svelte physique of sporty models like Karlie Kloss. When done well, fashion magazines have the potential to capture the resilience of athletic achievement and marry it with powerful imagery of equally ambitious sartorial prowess.

Yet the fashion media is often criticised for its tendency to fetishise or trivialise topics outside its orbit — so how did global fashion publishers fare in their portrayal of the world’s most extraordinary athletes?

Unlike the predictable, one-dimensional ways that fashion publications have featured athletes in the past — such as ill-fitting fashion make-overs — several editorials this year framed Olympic athletes in inspiring, biographical terms alongside strikingly stylish imagery. Here are some of the spotlights that stood out. 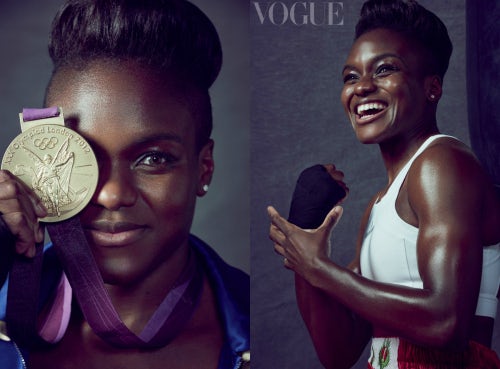 In their August issue, British Vogue profiles homegrown boxer Nicola Adams, who is breaking new ground in the boxing world, sweeping gold medals at inaugural female boxing events such as the Commonwealth Games and striving to be the first British boxer — male or female — to take home a double Olympic gold. Her uplifting story, of defying odds as a bisexual female in a male-dominated sport, is reflected in Matthew Brookes’ sleek yet pensive portrait of Adams sitting on the edge of the ring. A departure from her appearance in Marks and Spencer’s 2014 “Leading Ladies” campaign shot by Annie Leibovitz, Adams’ Vogue feature tells the sports icon’s story for what it is. 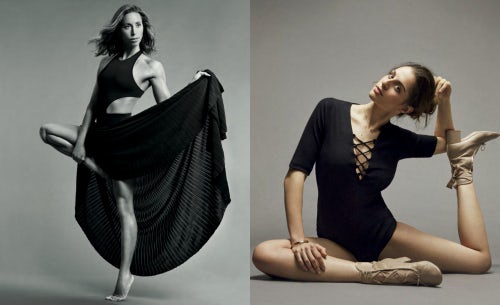 Editor-in-chief Eugenia de la Torriente cites readers’ demands to include women of courage, strength and hard work as part of her motivation to feature three women from the Spanish delegation in different stages of their sporting careers. Miriam Blasco, a retired judo player who won a gold medal at the 1992 Barcelona games, Gemma Mengual, a synchronized swimmer, who returns to compete for in her fourth Olympic games at Rio after a 2012 hiatus, and first-time Olympic gymnast Carolina Rodríguez grace the pages of Harper’s Bazaar Spain’s July issue in dynamic stills and stylish yet functional attire. “We were looking to portray their poise and beauty, but we also wanted to show the force and determination that have made them outstanding champions in their disciplines,” de la Torriente explains. “And, for us, it makes a lot of sense to feature sports icons in the magazine right now given the current athletic trend [in fashion].” 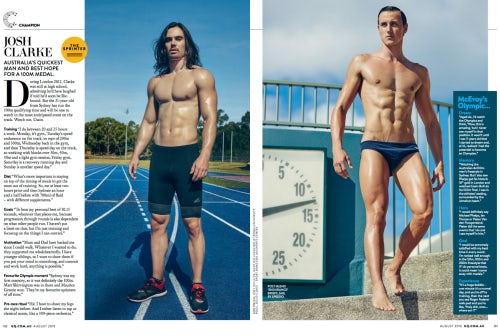 “Being the sports fanatics that Australians are, it’s in the magazine’s interests to bridge any boundaries between sport and fashion,” says GQ Australia’s managing editor, Mike Christensen. With that in the mind, the magazine's August issue featured swimmer Cameron McEvoy, sprinter Josh Clarke and wheelchair tennis player Dylan Alcott — three Australian athletes poised for gold at the 2016 Rio Olympics and Paralympics. The piece is sure to be well-received, given Christensen’s claim that over 50 percent of Australian men over 18 — GQ’s target audience — consume or participate in sport. “Agencies, brands and sponsors now see top athletes as a valuable commodity, and dare I say it, unlike many actors and celebrities, they possess genuine, unrivalled talent… That’s why brands are so keen to endorse them and be part of Olympics,” he adds. 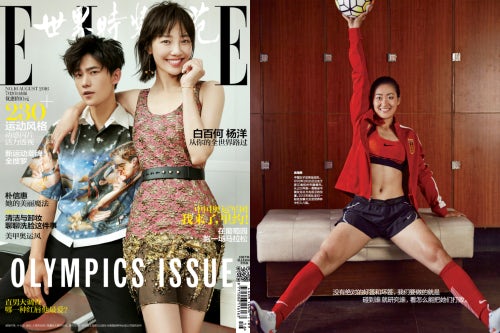 Elle China flew the Chinese flag high by featuring six of China’s youngest Olympic icons in their August issue. The athletes — most of them record-holders or world leaders in their sport — are dressed in Team China attire styled with jackets and accessories and reflect a broad cross-section of disciplines, from weightlifting to equestrian. The special report also features interviews with each Olympian. Deputy editorial editor Roth Lai explained the publication’s commitment to representing a sporty lifestyle alongside fashion through the Elle website’s new vertical, ELLEFit. “It helps to elevate their image and it also helps to promote them to younger readers,” Lai says of the feature Olympians, particularly those with existing fan bases like Alex Hua Tian and Su Bingtian. 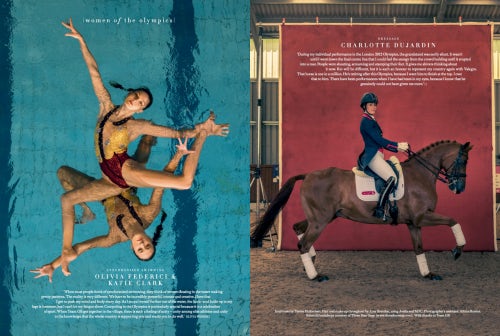 In a feature for Harper’s Bazaar UK, photographer Harry Cory Wright highlights the beauty of the meticulous and precise movements of 10 of Great Britain’s finest female athletes. The dynamic series is accompanied by the athletes’ recollections of previous Olympic experiences and sporting achievements, painting an emotional portrait of life as a world-class athlete. Dressage rider Charlotte Dujardin poses stoically atop her horse Valegro, and credits her four-legged companion for bringing her this far. Slalom canoeist Fiona Pennie is shot from above, navigating a frothing white river, while diver Tonia Couch is captured during the different stages of her artful descent. “It's important to Bazaar to reflect the many different roles that women fulfil in contemporary society — athletes included,” says editor-in-chief Justine Picardie. “We have never been confined to a narrow view of what constitutes female beauty, accomplishment or achievement.” 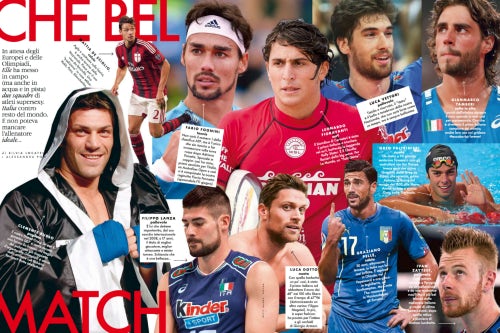 One of several Olympic-themed features in Elle Italy’s summer issues is a roundup of the sexiest men competing in the Olympics this year. Tennis, football and rugby players — hailing mostly from European countries — take centre stage in a four-page collage in the July issue. The action shots of the men at their peak performance are hardly of an editorial quality; instead seemingly presented as eye-candy. Senior features editor Luisa Simonetto explained her motivation differently, claiming handsome athletes make all sports look more appealing. She added that the magazine wanted to highlight the increasingly intertwined relationship between athletes and fashion in the context of advertising campaigns, where sportsmen are sometimes used as models and spokespeople. 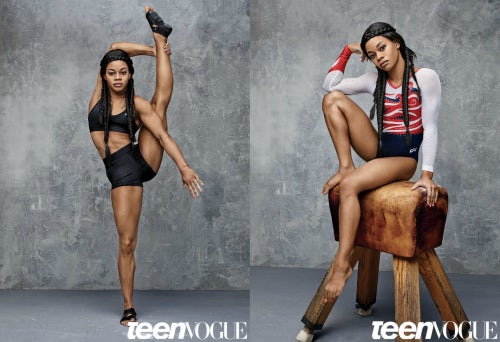 Known for spotlighting young, lesser-known women across different walks of life, Teen Vogue shot two covers for their August issue, featuring gymnasts Gabby Douglas and Simone Biles. Inspirational narratives of Douglas’ childhood hardships and homelessness are supplemented by online content including video interviews with the athletes, each in Nike attire — perhaps a nod to Douglas and Biles’ sponsorship deals with the brand. The feature delves into both the personal and professional lives of these young women of colour. Even in the Olympic off-season, Teen Vogue regularly includes female athletes as role models for their younger demographic, both in a fashion context and otherwise. Olympic fencer Nzingha Prescod was recently featured on the magazine’s website alongside emerging models and indie artists in a style round-up. 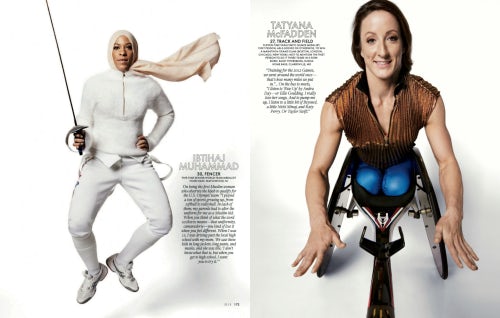 In one of the season’s most comprehensive roundups, Elle USA published a patriotic spread featuring a track and field Paralympic sportswoman, the first hijab-wearing Muslim woman to qualify for the Olympic games, and 18 other Team USA athletes. Shot mid-action against clean backgrounds, the teams, pairs and individual athletes were dressed in an artful mix of performance wear and designer pieces — looks honoured each athlete’s personal style while working in their gear, explained editor-in-chief Robbie Myers. Synchronised swimming duo Mariya Koroleva and Anita Alvarez donned matching Max Mara sequin silk tops, while gymnast Danell Leyva sported a Kenzo jacket and his own competition pants. The inclusive nature of such features, said Myers, celebrates how the Olympics brings together athletes and supporters from countries across the world. “We didn’t want to change them, make them over or ask them to dress in something that they wouldn’t feel comfortable in,” said Myers. 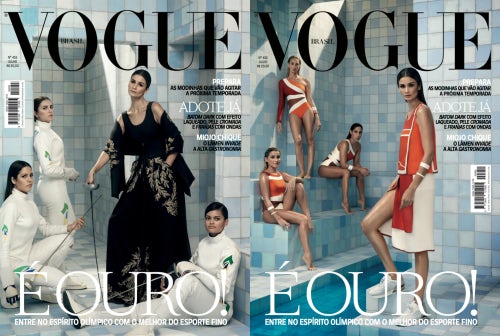 “A lot of fashion brands are responsible for the design of the official Olympic team of their countries, such as Lacoste for France, Stella McCartney for UK and Ralph Lauren for the US. Hermès, for example, is the official sponsor of the Brazilian equestrian team, and we did a feature with those athletes both in the July issue of Vogue and GQ,” says Daniela Falcão, editorial director of Edições Globo Condé Nast. In order to reflect the growing anticipation of the country’s role as the host of this year’s Olympic games, the Brazilian edition of Vogue released two covers featuring athletes and models posing together. The sophisticated imagery is a departure from the conventional combination of fashion and athletics, trading in athleisure for refined, posed group shots. Importantly, Falcão said, profiling Olympic athletes helps counter prejudices that fashion titles are superficial and ignore national affairs. “It reinforces that we are connected to what is going on in the country,” she added. 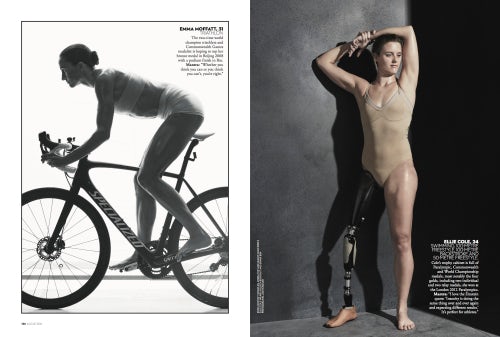 Vogue Australia put reporting in the hands of the woman who knows Team Australia better than any journalist; chef de mission, Kitty Chiller. Chiller authored a motivational — albeit subjective — essay of an insider’s take on the national Olympics team, illustrating the prowess of Team Australia’s female athletes. The feature took its title from the Olympic motto “Faster, Higher, Stronger.” “We photographed the athletes in neutral, as we didn’t want the garments to distract from the extraordinary physical form of these women,” said deputy editor Sophie Tedmanson. In addition to the print feature, Vogue Australia has broadened the scope of its Olympic coverage through digital content, with an online countdown to the Games that notably includes footage of a Vogue staff member going on a run with Olympic marathoner Milly Clark. 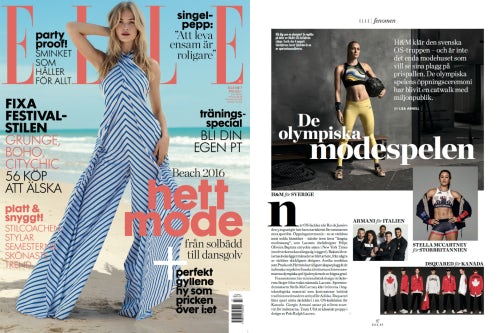 Elle Sweden’s feature of Olympic swimmer and H&M ambassador Sarah Sjöström examines the commercial bent of the athlete’s sporting success. A red-carpet photograph of her and Sjöström boyfriend depicts her as a style icon, with an accompanying interview about her diet, sartorial preferences and life outside the Olympics. The accompanying article, “Dress Like an Olympian,” explores the various national designer collaborations lined up for the Olympics. “Sports is an exciting fashion field under development, and is increasingly being mixed into our everyday clothing and life,” said Elle Sweden content manager Katarina Matsson. “The Olympic opening ceremony has become a catwalk with millions of viewers.” Matsson also justified Elle’s choice of Sjöström as Sweden’s biggest hope for a gold in Rio and her involvement in the design process of H&M’s Olympics collection.