A slew of slick, highly curated sites are aiming to disrupt the business of vintage. But for many fashion insiders, it’s the unpolished and uncurated eBay that continues to make fashion hearts beat faster.

LONDON, United Kingdom — In recent years, there has been a veritable explosion of fashion resale startups — from Vaunte, ThredUp and Covetique to The RealReal and Poshmark — aiming to disrupt eBay, the long-dominant player in the market for vintage clothing and accessories. These new launches offer slick, highly curated sites, promise hassle-free service and stock top labels like Proenza Schouler and Azzedine Alaïa. But for certain members of the fashion tribe, it’s the decidedly unpolished and uncurated eBay that continues to excite — albeit not for its eBay fashion business initiatives.

“EBay is a world market of strange things you just can't find anywhere else,” said Lynn Yaeger, a celebrated journalist and long-time fixture on the style scene, who has been using eBay since the 1990s to collect all kinds of items, from Georgian rings to vintage Comme des Garçons coats to 1930s Mickey Mouse memorabilia. “Its very uncurated quality is what makes it so appealing. [There are] designer clothes from 10 years ago you thought you'd never see again, strange vestiges from other people's childhoods that resonate with your own.”

Alexander Fury, fashion editor at The Independent, started using eBay in 2002. “The first thing I bought was a scarf from Giles Deacon’s final collection as creative director of Bottega Veneta, from Autumn/Winter 2001,” he said. “The idea of unearthing a hidden gem or, for me, the piece that I always wished I’d bought, whether it was when I was 13 or 30, is a huge motivating factor. I do use other auction sites — private auction houses as well as sites like WilliamVintage and 1stDibs — but eBay is the go-to for the esoteric and the extraordinary. You never know what you will unearth.”

Delve into the hundreds of millions of listings on eBay and you’ll discover a special language full of seemingly odd abbreviations and cadences. You type in the search bar “Isabel Marant,” perhaps in hopes of finding her signature leather and suede fringe boots, which retail for $1,630. But the listings that surface might look something like this: “Isabel Marant fringed boots SZ39 – NWOT – RRP £970.” While the latter part might seem nonsensical, NWOT means 'new without tags' and RRP is 'recommended retail price'. You’ll encounter all kinds of esoteric acronyms, from SZ (size) to NIB (new in box) to BIN (buy it now). 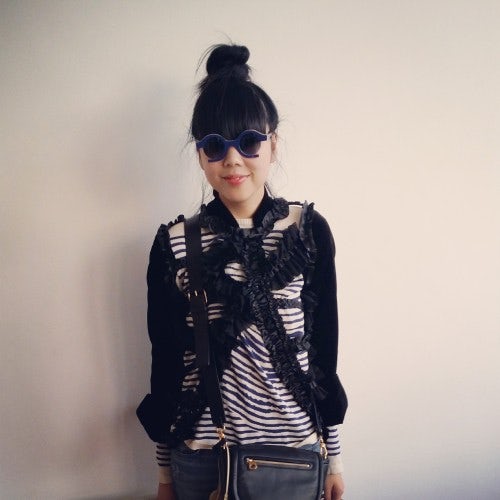 Between October and December of 2013, the number of active eBay users was over 128 million globally – a 14 percent increase compared to the same period in 2012. More than 400 million items were sold and sellers generated a staggering $83 billion in total sales volume. The site is massive and seemingly un-policed in that it offers everything and anything, from the low-end to the high-end, whether it is a brand-less cotton tote bag for $5 or a large quilted Chanel 2.55 in lambskin, where the auction starts at an eye-watering $3,500.

For this very reason, some find the site hard to parse, but blogger and editor Susanna Lau, known as Susie Bubble, describes navigating the site’s uncurated listings as part of the fun. “For me, it's the surprise element. I like the random nature of eBay and the fact that when you win or buy something, there's a real sense of accomplishment. I naturally like trawling through lots of things and spending time on the hunt — that's half the fun of shopping online. It has that physical flea market thrift element that I like, but online,” said Lau. “I recently bought a Comme des Garçons jacket from the Spring/Summer 2008 collection for $80 proving that bargains can still be had! I'm now stalking quite a few Balenciaga by Nicholas Ghesquière pieces.” 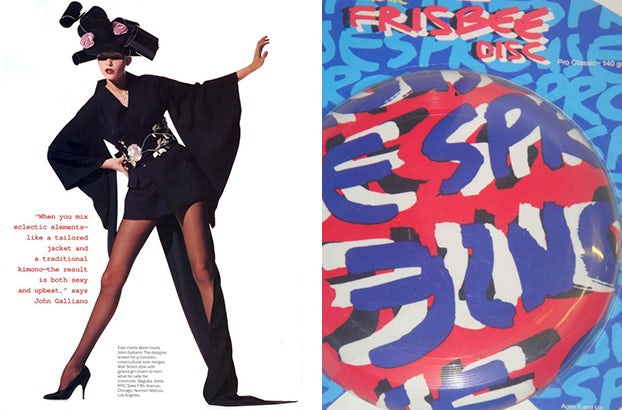 “I was quite an early user,” said Mandi Lennard, fashion consultant and founder of Mandi’s Basement. “I remember around 2001, Marc Jacobs sent select editors LV Speedy bags with the Stephen Sprouse graffiti in khaki as a special gift. It was never produced for the store. One night — I couldn’t believe it — they were all over eBay. It was so exciting to realise everyone was flogging them!”

“My regular search is 'Chanel store,' as this leads me to original shop fittings,” continued Lennard. “I have a massive Chanel No.5 factice (a dummy perfume bottle for display) and a large metal CC sign. Another favourite, when I'm bored, is to bid for fake Chanel stickers. I've got a Stephen Sprouse frisbee in its original packaging. And I always buy sneakers on eBay. It's my insurance policy to ensure I get my size in new Air Jordan releases. Loads of dealers take pre-orders,” added Lennard. “I'm still on the look out for original Madeleine Mono make up from the '70s, Bill Gibb dresses and Eduardo Paolozzi lithographs. And sometimes, very late at night, there's a high temptation to click 'buy' on an original Murakami x Louis Vuitton 'Monogramouflage' canvas. Plus, I’m always on the look out for one of those Louis Vuitton monogram teddy bears, released to coincide with the Louis Vuitton Autumn/Winter 2004/05 menswear show — only 500 were made and sent to VIPs.”

Given how much clothing is made and disposed of annually, some also like the fact that finding fashion and accessories on eBay is sustainable. “I’ve always liked that eBay is environmentally friendly, like a lending library or a swap shop,” said Benjamin Seidler, a designer and illustrator whose clients include Acne Studios, Prada and Asprey. “It's recycling in its most glamorous incarnation. It offers second chances at missed sartorial opportunities. From a fashion point of view, it's also an interesting tool to see what doesn't lose value over time.”

He added, “There are always other fashion enthusiasts out there who, like me, feel they missed out on a season and are then given a second chance by eBay. Alex Fury has bid on several of my Prada items. He’s a friend, and it’s quite fun when you see the buyer of your item is someone you know. And it’s nice to know that your fashion finds are going to someone who cares about them.”