MIAMI BEACH, United States — On December 1, just as Art Basel Miami kicks off in the city’s Design District, work by Alex Katz, one of America’s most celebrated figurative artists, will be ready for sale. The twist? The work won’t be shown at a gallery or exhibition space. Instead, Katz's serene colour-saturated portraits will appear on men’s and women’s clothing and accessories, as well as home goods, sold exclusively at fast fashion behemoth H&M’s Miami retail locations and e-commerce site.

If the retailer has its way, the 19-piece Alex Katz X H&M offering might well become as collectible as the painter’s original works, which have sold for more than $400,000 at auction. Of course,  it is also significantly more affordable, with prices ranging from $19.99 for a serving tray to $79.99 for an organic-cotton maxi dress, topping out at $129.99 for a leather tote. 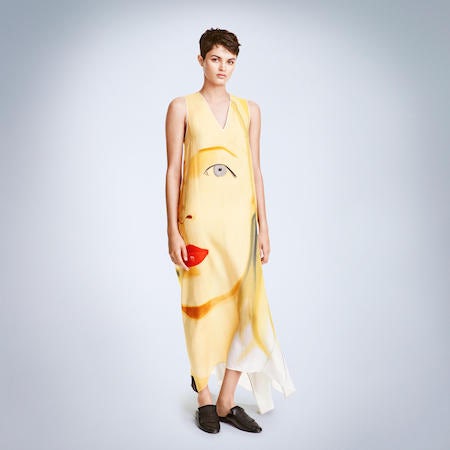 H&M’s partnership with Katz is just the latest in a string of recent collaborations between fine artists and mass-market fashion retailers. In 2014, the Swedish fast fashion giant kicked off the trend, commissioning American artist Jeff Koons to design a ladylike leather handbag screen printed in metallic with one of his famous balloon dogs. The sell-out piece, which sold for $49.95, was created to coincide with his retrospective at the Whitney Museum of American Art, which H&M sponsored. (Another edition was issued in Paris later that year when the exhibition moved to the Centre Pompidou.)

More recently, H&M-owned COS created a capsule collection to complement the Guggenheim’s Agnes Martin retrospective, which the high street retailer — known for its intellectual and sculptural wares inspired by mid-century design — sponsored.

Then there is Uniqlo’s ongoing partnership with the Museum of Modern Art (MoMA) in New York City, which, among other products, has given birth to a series of  t-shirts inspired, in part, by works from the museum’s permanent collection, as well as new designs created in collaboration with living artists. Since the start of the partnership, which began in 2013 with Uniqlo’s sponsorship of the museum’s “Free Friday Nights” admission programme, work by the likes of Jean-Michel Basquiat, Keith Haring, Jackson Pollock and Ryan McGinness has been featured on Uniqlo garments.

While luxury brands have long collaborated with blue-chip artists, the strategy is relatively new for high street labels. Part of the reason is growth in public interest in art. In a 2016 study of nearly 500 art institutions, trade publication The Art Newspaper found that museums that expanded their physical footprints saw attendance increase on average by 14 percent between 2007 and 2014. Museums that did not expand still saw their numbers increase by an average of 10 percent.

Some major institutions have seen their numbers rise more dramatically. While MoMA and the Guggenheim last celebrated record attendance back in 2009, New York’s Metropolitan Museum of Art, for example, set yet another attendance record this year, attracting 6.7 million visitors during the fiscal year that ended on June 30, up from 6.3 million the year before and the highest number since the museum began tracking admissions over 40 years ago.

The rise of blockbuster art shows pitched to the mass public with popular themes and large corporate sponsors — combined with the rise of social media platforms like Instagram — has been key to democratising the art world, turning it into a growing pillar of popular culture and more fertile territory for retailers. “I think social media is playing quite a big role,” says Bernadette Kissane, an analyst at Euromonitor International.

For artists and art institutions, the benefits of collaborating with mass fashion brands are clear. For one, there is the exposure offered by a mass retailer, not only in-store but also via its marketing channels. There are also undeniable financial motivations. In many circumstances, retailers fund major exhibitions outright, or compensate relevant artists or institutions in the same way they would a top designer, with deals often worth several millions of dollars, especially if the partnership extends beyond a single exhibition.

Art and fast fashion collaborations are still relatively niche. It’s going to be much more difficult to educate the consumer on the value of the product.

“MoMA is focused on helping a wide audience understand and enjoy the art of our time, and this partnership [with Uniqlo] supports that mission — from our retail collaboration, which enables new audiences to engage with well-known and lesser-known artists in our collection... to the Uniqlo ‘Free Friday Night’ programme, which provides free admission for everyone,” explains Thomas Randon, MoMA’s general manager of retail. “In all cases, these activities extend MoMA's brand and educational mission, enable us to reach new communities and help financially support the museum's exhibitions."

Retailers see it as a chance to enrich the consumer experience both at the store and in the museum. “By changing the way we present these artworks... we are able to bring design to the forefront and customers are able to experience art in a new and modern way,” suggests Masahiro Endo, Uniqlo USA’s director of marketing.

For artists, the best scenarios offer both a creative and financial gain. “The artist is often attracted by the opportunity to work in a new material, to access the expertise of a fashion design team, or to be afforded a budget for a video,” says Cary Leitzes, founder of creative agency Leitzes & Co, which connects artists with big companies. “Or maybe they just want the money.”

Leitzes cites Takashi Murakami’s 13-year partnership with Louis Vuitton — which began in 2003 — as the definitive shift in the art world’s attitude toward large-scale commercial collaborations. While Louis Vuitton is not positioned as a mass-market brand, it certainly has mass reach. “It became much more acceptable,” she says. “It just became a different medium for the artists.”

But while mass retailers are likely to benefit from the halo effect that comes from aligning with a cultural institution or prominent artist, creating a physical product that resonates with consumers — many of whom may have not yet heard of the artist being represented — can prove more challenging. “There is no cookie-cutter formula,” Leitzes says. “What artists do that really gives value is surprise. They capture the imagination, they make you feel something. If the brand is confident to go enough on that ride, the results can be extraordinary.”

“It creates an image of craftsmanship and curation,” Kissane suggests. “Adding more credibility to its craft goes a long way in helping a brand establish itself.”

For a brand like COS, which is catering to a sliver of a mass audience that favours a certain aesthetic, specificity is key. “The king is Donald Judd, and the queen is Agnes Martin,” says Atul Pathak, a COS spokesperson. “From day one, both of those artists have been very influential to our design team.”

It’s no surprise, then, that the Agnes Martin capsule collection, which is available to purchase in COS stores and online, but also in the Guggenheim’s gift shop, is in line with the minimalist pieces typically offered by the retailer. Items include an origami-like navy wrap skirt tied at the waist ($125), but also a linen work jacket printed with a hand-drawn grid inspired by the artist. “From a distance, [Martin’s] works often look quite straightforward in a way, but up close there is an intricacy,” Pathak says. “That’s very much how the design team approaches things.”

H&M, which reaches a wider range of customers with its gentler price point and wider product offering, has approached its artist collaborations with a broader brush. “Someone like Alex Katz really works for H&M because his work is colourful, vibrant, very iconic,” says Marybeth Schmitt, an H&M spokesperson. “Some of our customers will already be fans, some might just be inspired by the work.”

To be sure, just as more traditional designer collaborations — like H&M’s recent Kenzo partnership — rarely make much of an impact on sales revenues, retailers are surely not expecting a financial windfall from these art-world partnerships. Rather, these collaborations are generally measured in terms of buzz, media impressions and resulting footfall. In some cases, the lack of direct financial goals has allowed for more fluidity in release schedules. (Designer collaborations, on the other hand, are delivered on a fairly regular basis: H&M’s drops each autumn, while Target’s are delivered in the spring.) “We’re going to continue working with artists, but it’s not going to be ever year,” Schmitt says. “Instead, it’ll be when we find the right partner.”

But as art’s connection to pop continues to swell, retailers may well begin to rely more and more on the aesthetic and cultural power of these partnerships to drive sales. Breakout designer collaborations — including Target’s partnership with Missoni in 2011 and H&M’s Isabel Marant collection in 2013 — have proven that a collaboration can indeed drive significant sales. (Both collections were highlighted as financial successes in quarterly reports from these public companies.)