H&M and Zara-owner Inditex disrupted the fashion industry with lightning-fast production, trend-led products and a vast retail footprint. But today a new wave of digital disruption is coming from e-commerce players like Asos, Boohoo, Zalando and Amazon, and the fast-fashion behemoths are being uncharacteristically slow to catch up.

According to Euromonitor International, 14 percent of the global apparel and footwear market was online last year, worth $231.7 billion. It’s even higher in some of the major economies: in the US online accounted for 15.5 percent of sales in 2016; in the UK it was 18.7 percent and in China it was 25.9 percent. Given the target audience of both H&M and Zara are the most digitally savvy of all consumers, millennials, it calls into question why the fast-fashion giants are so behind. Indeed, Credit Suisse estimates online accounts for 5.5 percent of sales at Inditex and around 4 to 5 percent at H&M. H&M doesn’t disclose what proportion of sales come from online while Zara-owner Inditex is equally tight-lipped citing its “integrated” store and online model. A slow acceptance that online players were eating away at revenues finally pushed Zara online in 2010, 10 years after Asos — whose sales reached $1.87 billion last year — launched its online-only range of budget-priced clothing for 18 to 35 years olds that looked like products seen on celebrities. Initial hesitancy surrounded fears that the cost of delivery and returns would weigh too heavily on profitability and even cannibalise existing stores.

The store has always been integral to the Inditex “pull-model,” where feedback from on-the-floor staff is used to drive the fashion decisions it makes. (Daily feedback from store managers is fed to the 700-strong design team.) It’s centralised inventory, developed to make store delivery faster, also works to make it easier to fulfil online orders. The majority of its products are sourced close to its headquarters in Spain, Portugal, Turkey and Morocco, and its 10 logistic centres, all based in Spain, can deliver anywhere in the world within 48 hours; new styles land in store twice a week, with new products typically taking just three weeks from drawing board to store.

Zara also has the advantage of an older customer base who are more willing to spend on its higher price points. For H&M online appears a much harder task, with an average shopper who is a more price-conscious 15 to 25 years old, versus Zara’s 18 to 35 years.

We view value fashion retailers as the clothing retail segment most disrupted by online.

“We view value fashion retailers as the clothing retail segment most disrupted by online,” says Anne Critchlow, an analyst at Société Générale, who says the value retail market — of which H&M is a part — can only be sold profitably either entirely online, like Boohoo, or entirely through physical stores, like Primark. “It is difficult and damaging to a retailer’s margin to attempt to sell through both channels.” 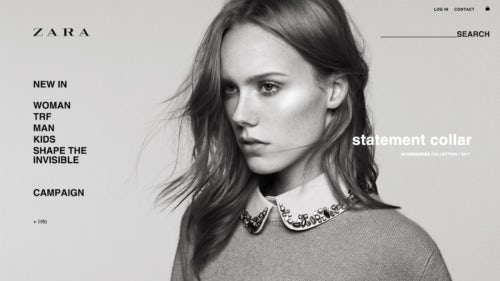 Indeed, for H&M its lower prices make it harder to offset delivery costs. To keep costs low, it sources about 80 percent of it products from Asia, where longer lead times make it harder to react quickly to demand. This also makes it harder to compete against pure online operators, who have a higher level of newness on their sites and can adapt their offer and prices as demand changes. While Mr Persson said H&M now expects online sales growth of at least 25 percent per year, with profitability matching that of stores, the brand’s focus has also been to continue to roll out huge numbers of stores as it takes advantage of untapped markets. With around 4,300 stores already and another 500 planned this year, analysts question if continual focus on physical store expansion is the right one, given the wave of online growth the market is facing. “We remain unconvinced that the aggressive rollout strategy is appropriate for the current environment,” Mr Irwin says.

In the last decade the mass-market for fashion has become increasingly competitive with a raft of new players selling online faster and with greater service. Berlin-based Zalando is one such disruptor: the retail technology firm offers free delivery and free returns for up to 100 days across Europe, an offer largely unmatched by rivals. Zalando is targeting sales growth of between 20 and 25 percent via its online model of over 1,500 brands like Reebok and Levi’s. Compare that to H&M who reported first-half sales climbed 9 percent. From a start-up in 2008, Zalando has grown to sales of $4.2 billion last year as it has invested heavily in its service capabilities like Zalando Zet, a premium membership service offering early access to sales, quicker delivery, and fashion tips from stylists.

Similarly, UK-listed pure-player Asos has carved a successful niche amongst 20-somethings with a mix of own-label and branded items, low prices, and speedy delivery from local distribution centres. Over half of sales from its 15 million customers come from mobile, where the retailer has invested in app functions like visual search, a tool that sees users take a photo of a product and the app suggest similar items from it’s 85,000 product list. Asos says it expects sales growth of 30 to 35 percent this year.

There is no denying Amazon’s fashion ambitions either, with Amazon Fashion; Zappos; Shopbop and East Dane; Endless.com; a growing own-label business; and its recently launched Prime Wardrobe program, where customers can try on clothing at home for seven days before purchasing. It makes for formidable competition for H&M and Zara.

Still, online hasn’t worked for everyone. Primark, who sells $3.80 basic T-shirts, trialled e-commerce via Asos in 2013; despite the retailer boasting of “phenomenal demand” in the first week, the tie-up ended after three months. The low cost of Primark’s products coupled with the price of shipping make profitability “difficult,” the retailer said at the time, and to this day it still has no online sales offer.

So how can they catch-up? H&M is now re-thinking how the stores become part of an omni-channel model, integrating them for a “seamless, smooth and inspiring shopping experience,” Mr Persson said earlier this year. The brand is adding mobile app features such as “scan and buy” where shoppers can scan products in store not available in their size and have it delivered to their home. It is also enhancing services with time-slot deliveries in Japan and using so-called “advanced analytics” where algorithms improve assortment in store and logistics.

H&M's multi-channel capability is some way from catching up with peers.

“Much depends on whether one believes that all the on-going change will lead to H&M being a better business in two years' time, or whether management's optimism is misplaced in an industry which is moving just as fast, and where delivering change is tough,” says Mr Irwin. “Its multi-channel capability is some way from catching up with peers.” H&M only trialled a click and collect option in the UK this year, where shoppers order online and collect a product in a store.

E-commerce will reach around 30 percent of sales in 10 years time in mass-market apparel and footwear, according to Barclays analyst Andrew Ross. “The biggest difficulty that brick and mortar companies face when building their online presence is in fact their existing offline business and the legacy systems and operations tied to it,” Mr Ross says. “While online-only companies have the freedom to use the latest technologies and create the most efficient, internet-driven inventory management systems, offline retailers are often stuck in a much more cumbersome process of layering an online presence on top of existing infrastructure.”

Zara describes its stores as using a “global, fully integrated store and online model.” It is focusing less on a roll-out of new stores, but rather on new flagships, by adapting those with its radio frequency identification system that helps staff and shoppers find product in-store, nearby or online; enhancing store availability; and boosting online sales.

Both H&M and Zara “have been lagging definitely and they do need things like just faster delivery times; shoppers want it now,” says Maureen Hinton, global retail research director at GlobalData, the research firm. H&M in particular is facing a “tougher, more competitive market who have less to spend and far more competition with Zalando as well as Amazon and Primark,” she added. A fast pace really will be vital.