Fast-growing Monica Vinader has successfully tapped a gap between fine and fashion jewellery. Now, the company is moving ahead with its long-held plans for global expansion.

LONDON, United Kingdom — Accessible jewellery brand Monica Vinader has had a transformative eighteen months. Turnover for 2014 is projected to hit £14 million (about $22 million) — up 85 percent year-on-year — and the company, which operates from the rural English county of Norfolk, has opened several new points of sale as part of its plan to become a “global brand with a £50 million turnover by 2019.”

In London, Monica Vinader has added two shiny new retail stores to its existing South Molton Street presence, including a two-storey, 2,500-square-foot flagship in the city's Chelsea district. Meanwhile, just one week ago, the company opened a boutique in Hong Kong's IFC mall. And, in the coming weeks, a space at Boutique1 in Dubai is set to debut. The brand is also available at Harrods, Selfridges and Liberty, as well as online at Net-a-Porter and via its own e-commerce site.

For Monica Vinader, who founded the eponymous company in 2007 with her sister Gabriela Vinader, their recent achievements represent not so much an inflection point, as a few more steps along a road they say they mapped out from the very inception of the brand.

“When I read our business plan from 2007, it really hasn’t changed much. Gaby and I were quite focused and we’ve always known where we wanted to go,” Monica Vinader explains. “From day one the plan was to build a brand and for it to be a global luxury brand; we knew that we wanted to be in the accessible luxury arena and that there was a gap between fine and costume jewellery that we would bridge.”

Art school-educated, with three years experience working for UK-based jewellers Tateossian and a cosmopolitan lifestyle that has exposed her to inspiration from around the world, Vinader has always been the creative force behind the company. In 2002, while still working for a high-end, Buenos Aires-based travel company, Vinader started to “dabble,” as she puts it, in the world of jewellery. Even as she describes that early “bespoke experiment,” it is evident that this was no mere hobby and Vinader was already thinking about how she could build a successful commercial enterprise around what she saw as a gap in the market. 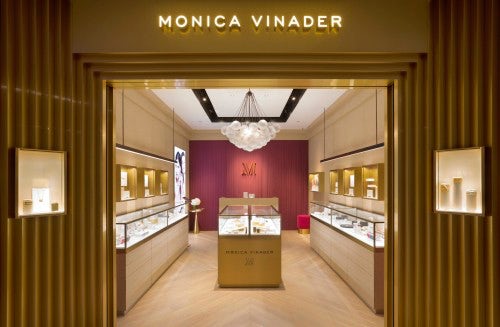 Specifically, Vinader was interested in what was then a relative hinterland between fine and fashion jewellery. Prior to working on her own designs, she had, herself, tried in vain to find pieces made with fine materials that were neither prohibitively expensive nor aesthetically bland. And when she began creating her own jewellery and selling directly to customers from her studio in Norfolk and, later, through London department store Liberty, Vinader was intrigued to discover the number of women who were eager to buy this kind of jewellery. “I understood very early on the power of involving the customer,” she explains. “They became very engaged in the process.”

Importantly, customisation is a key pillar of the Monica Vinader brand — the rings and pendants that the company sells are designed to be worn in combination, allowing customers to create individual portmanteau pieces. Every Monica Vinader store and concession offers in-house engraving for friendship bracelets and necklaces.

Gift purchases also make up a large part of the company's turnover and a surprisingly large proportion of this is made up of women buying gifts for other women. In fact, girlfriends often club together to purchases Monica Vinader items for friends.

Accessibility is built into the core of the brand. While the company's product and store designs communicate quality and luxury, the staff are friendly and the prices are unthreatening. While a few pieces creep into the thousands, such as the Ava Diamond Disc Cocktail Ring, which retails for £1,250 (about $2,000), much of the offering is much more affordable. Friendship bracelets, such as Monica Vinader's Havana and Bali models, start at £85 (about $140) and most pieces are priced between that and £300 (about $495).

“The look of gold was very popular, as well as the real stones. Customers really appreciated the quality of my materials,” explains Vinader. But to keep prices down the company uses vermeil, sterling silver coated with gold. The designs also make judicious use of decorative stones — deep blue lapis, sharp toned turquoise, milky iridescent labradorite and moonstones, striated dendritic agate — as well as tiny diamonds and cloudy but finely-coloured gems such as emerald, ruby and sapphire.

For the Vinaders, rapid growth has always been part of the plan. At first, this meant finding gem cutters and manufacturers in India who believed in the company's vision, accepting small orders for the first few years in the belief that swift expansion would follow. “We’ve hired ahead of growth and set up our supply base ahead of growth,” explains Monica. “We also spent quite a lot of time establishing our senior team.”

Monica Vinader has been profitable since 2009 and consistently reinvests profits in the company's expansion. But external investment has also been key to driving the brand forward. In 2008, a loan allowed the nascent brand to get its product into stores for Christmas; in 2010, the company raised funding from London-based venture capital firm Beringea, allowing them to open their South Molton Street store; further investment, in 2013, from Beringea and the Clark Group, a private equity firm, helped to support brick-and-mortar retail expansion, as well as the development of the brand's e-commerce site, which currently drives a third of the company’s turnover. 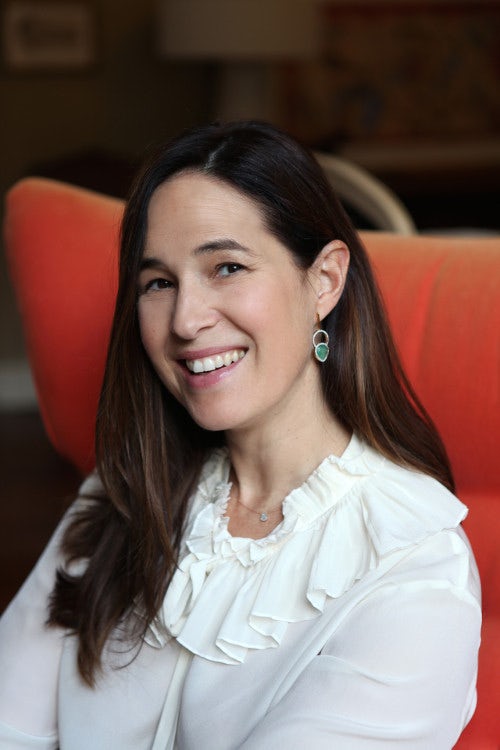 E-commerce has also been the brand’s testing ground for evaluating the viability of expanding into new territories. The company's retail openings in Hong Kong and Dubai both followed strong online sales in these markets and Vinader expects the new physical stores will drive sales online, and vice versa.

Next up, Vinader has her sights on the US market: “We’re getting some very good traction both through Net-a-Porter and our own website. That’s going to be one of my focuses for next year, but we really need to have the team to be able to scale up to it.”

While Monica Vinder may be the voice and the name of the brand, she frequently refers to her sister Gabriela — the company’s chief operating officer, who worked at Amazon, the Boston Consulting Group and Merrill Lynch prior to joining the jewellery venture — as critical to the success of the business. “Our complimentary skills have been key to what we’ve done,” says Vinader. “I couldn’t have set up a business and afforded to hire her, and she couldn’t have afforded to do the reverse.”