Danial Aitouganov, one of the finalists at the Hyères Festival | Source: Courtesy
Share
1 Comment
By Vikram Alexei Kansara May 1, 2017 21:40

HYÈRES, France — As members of the French fashion elite assembled here in the sunny south of France, at the early-modernist Villa Noailles, to select the winners of the 32nd International Festival of Fashion and Photography in Hyères, a contest of a very different sort was unfolding across the country. In the first round of France’s most consequential election in recent history, voters sent Emmanuel Macron and Marine Le Pen to a runoff that will determine the nation’s next president. And with the final vote only days away, the contenders are locked in a battle with major implications for the fashion industry in France, home to luxury giants like LVMH, Kering, Hermès and Chanel, and said to generate annual sales of over €150 billion ($170 billion), more than the country’s aerospace and automobile sectors, according to a 2016 study by the Institut Français de la Mode.

The two finalists — neither from a traditional political party — have radically different visions for the future of a country that, alongside Germany, is a central pillar of the European Union, but is suffering from high unemployment, a wave of terrorist attacks and a cultural malaise as it comes to grips with a globalised world. Emmanuel Macron, a former economy minister who is only 39 years old, is running on a novel platform that is pro-business, pro-social welfare and pro-European Union. On the other hand, Marine Le Pen, the far-right Front National firebrand, is pushing a populist, “France first” agenda that rejects immigration, the European Union and globalisation more broadly. The Front National has long been associated with anti-Semitism and Islamophobia, though Le Pen has attempted to put a softer, more palatable face on the party founded by her father, Jean-Marie Le Pen, who has been dubbed “the Devil of the Republic.” 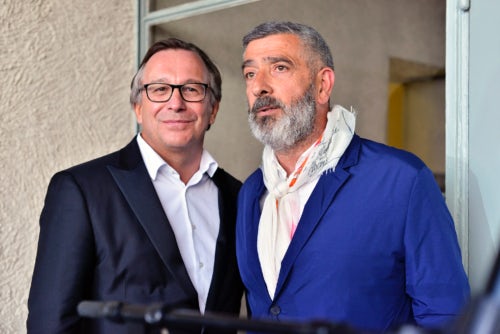 According to local political lore, French voters follow their hearts in the first round of presidential elections, favouring the candidate that aligns best with their emotions, but follow their heads in the runoff, choosing the safer option at the end of the day. In the final vote, set for May 7, Macron is widely thought to have the upper hand. But after the shock of last year’s Brexit vote in the UK and the election of Donald Trump in the US, the outcome in France is anything but certain.

“The French vote is important for France, but for the European Union too,” said Luca Solca, head of luxury goods at BNP Exane Paribas. “A vote for the Front National to quit the euro would cause significant market turmoil.” And yet few fashion leaders have openly taken a position on the election.

Speaking to the French newspaper Le Figaro, LVMH chairman and chief executive Bernard Arnault recently expressed his support for Macron. Meanwhile, Balmain designer Olivier Rousteing, who is of mixed race, posted a picture of Macron on his Instagram. But at the opening of the Hyères Festival, which draws many from the Paris fashion establishment to a region of France known as a right-wing stronghold, Jean-Pierre Blanc, the event’s founder and director, made fashion’s strongest political statement yet. “Something is happening in the country that I cannot hide,” he said, citing his own foreign origins in Italy. In the name of the body which organises the Hyères Festival, along with five other art centres in the region, Blanc made clear: “We are against the Front National.”

Marine Le Pen’s ideas are not good for creativity and the fashion business without creativity is nothing.

“There are two finalists — but one is extreme,” he continued, breaking down his position for BoF in a small room in the belly of the Villa Noailles the following afternoon. “It’s really simple for me: I’m against racism, I’m against homophobia, I’m against leaving the European Union, I’m against closing the borders. Marine Le Pen says we have to be traditional, we have to respect the past — these ideas are not good for creativity and the fashion business without creativity is nothing.” 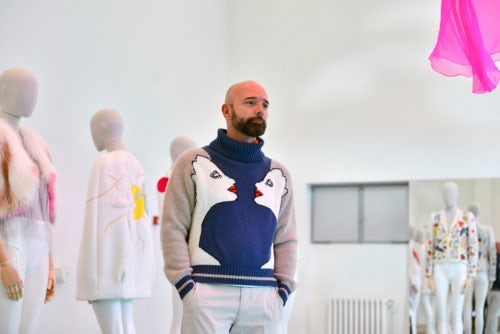 Indeed, many at the Hyères Festival were fearful of a Le Pen win. “I am afraid. I am very conscious of the danger,” said Bertrand Guyon, design director of Schiaparelli and president of this year’s jury, speaking to BoF at a former swimming pool that had been transformed into a surrealist exhibit featuring Schiaparelli designs, some of which appeared to be floating.

“I’m afraid,” echoed Pascale Mussard, the great-great-great-granddaughter of Thierry Hermès, director of the company’s Petit H line and the president of the Villa Noailles, sitting in the compound’s Cubist Garden. “Many people said to me: ‘Politics has nothing to do with what you are doing.’ But yes it does, yes it does. It’s our responsibility. My grandfather said we have to be international; to travel and exchange and interact with others. Members of my family went to Canada, Japan, India. You learn from others,” she continued. “I feel sad because this choice exists. Political beliefs are a photograph of who we are.”

“The house of Chanel and the Hyères Festival are both driven by the same passion: to celebrate creativity, innovation and audacity — all fundamental values,” said Chanel’s president of fashion Bruno Pavlovsky, though he declined to directly address the political backdrop other than to say: “Luxury has a key role in the French economy and, as such, we hope to be supported by the next government.”

Many people said to me: ‘Politics has nothing to do with what you are doing.’ But yes it does, yes it does.

At a seaside lunch hosted by Chloé, chief executive Geoffroy de la Bourdonnaye told BoF: “As a citizen, I believe France has lots of talent. We are a country of liberty, equality and fraternity. The values of France are very strong. At Chloé, we have always believed in freedom. We respect everyone’s opinions, everyone’s style; all genders, religions, ways of expression; this fundamental freedom of allowing people to be whoever they want to be. Every pressure that prevents people from acting the way they want, in my personal mind, is dangerous.” 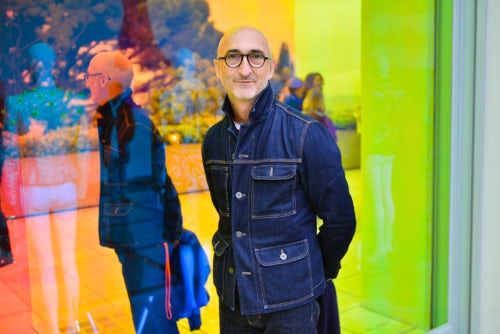 The designer Pierre Hardy at the Hyères Festival | Source: Courtesy

“I really want to believe that in this country — a nation of revolution and enlightenment — it will not happen,” declared Pierre Hardy, founder of the namesake footwear label and creative director of footwear and fine jewellery for Hermès, sitting in the shade in the Villa Noailles’ jardin suspendu overlooking Hyères and contemplating what he called “the horror” of a possible Front National victory. “Paris is very attractive for fashion. It’s the right place for designers to meet the rest of the world and show a collection. Just think about the US brands presenting in Paris next season. But beside this, we see a monster growing.”

“I’m scared,” said public relations guru Lucien Pagès. “The people of France must choose their future. Either they go into the darkness, or they choose progress. Marine Le Pen is anti-fashion. The values she represents are anti-fashion. We are a community made up of people from all over the world. Nobody cares in fashion if you are Chinese or black or Middle Eastern or American or English.” 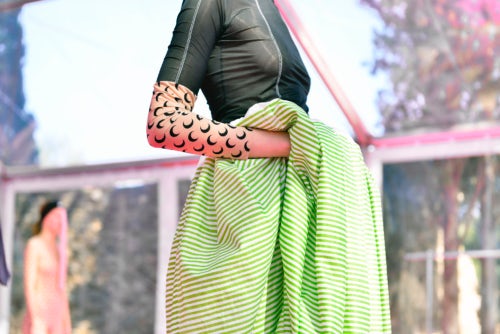 As if to underscore the point, the designers and photographers competing in this year’s Hyères Festival came from a wide spectrum of countries: Armenia, Australia, China, the Czech Republic, Denmark, Estonia, Finland, Germany, Ireland, Japan, the Netherlands, New Zealand, Norway, Russia, South Africa, South Korea, Spain, Sweden, Switzerland and the United States, as well as France.

But the French did not go without recognition. Galeries Lafayette invited French designer Marine Serre, who currently works in the design studio at Balenciaga and is a finalist for the LVMH Prize, to be its next guest designer on the strength of a collection inspired by both 19th-century Arabic dress and modern-day sportswear. Many of her pieces were tagged with a logo-like motif that looked like a blend of Nike’s “swoosh” and an Islamic crescent moon. The title of the collection: “Radical Call for Love.”