LONDON, United Kingdom — At the Pitti Uomo trade show in January, male models walked the halls of the Palazzo Medici Riccardi clad in embroidered sweaters, hunting attire and leather pyjamas. But it wasn’t the clothing that was most surprising. It was the company behind the collection: Berlin-based magazine 032c.

Founded in 1999, the publication launched its first clothing range in 2015. Today, fashion makes up half of the company’s revenue, surpassing advertising, says founder and editor-in-chief Joerg Koch. Koch, along with his wife Maria — who has a background in fashion design — is increasingly occupied with growing 032c’s clothing line, which is stocked in over 100 retailers worldwide including Selfridges in London, KM20 in Moscow and Bergdorf Goodman in New York.

“The magazine would act as an incubator for the clothing line,” says Koch. “But now the apparel line has taken over. It survives on its own. We’re happy to cannibalise on the attention. It’s fine if people think the apparel line comes before the magazine.”

Many magazine fashion lines began and ended with merch: logo-emblazoned cotton T-shirts by publications like Fantastic Man, LOVE and even Vogue. But 032c is among a number of publications launching fully fledged fashion collections. Mostly produced by niche magazines with small but dedicated readerships, these lines can help to build loyalty and provide a new source of revenue as advertising dollars dry up. According to data by Standard Media Index, the top 35 fashion magazines in the US saw advertising revenue decline by 40 percent from $2.4 billion in 2010 to $1.5 billion in 2017.

These lines can help to build loyalty and provide a new source of revenue as advertising dollars dry up.

032c’s line rarely features the magazine’s logo. Instead, its first full collection included a full menswear line with jackets and pants, and it’s set to launch a womenswear collection at Reference I Festival in Berlin’s Bergheim club in October.

Dust Magazine and Holiday have also launched full-blown collections. Online publication Who What Wear has a longstanding collaboration with Target for a namesake collection. And for some media companies the fashion business is proving almost as lucrative as publishing — if not more.

“We don’t know what it was like [working in publishing] in the 1990s, but we found a way to create a vision and enforce what we do with the clothing line, aesthetically but also economically,” says Luigi Vitali, publisher of Dust, a niche biannual fashion magazine, which also has a clothing line stocked in wholesalers including Opening Ceremony worldwide and The Broken Arm boutique in Paris.

An extension of the universe of the magazine into wearable pieces, Vitali calls it “an art project,” and makes sure to differentiate it from merchandise. “We’ve done a womenswear collection with vests, dresses — it was pretty complex,” he says. “Our last capsule even had suits.”

For Holiday magazine publisher Franck Durand, “it made sense to link the fashion business and lifestyle world” when launching a line of branded T-shirts and crewnecks in 2014, based on the aesthetic of the popular ’60s travel and lifestyle magazine that was re-launched that same year.

It’s what attracted retailers like Mr Porter, who began stocking the label in March. “There needs to be a clear reason for a publication to launch its own clothing brand — i.e. it has a renowned heritage or defining aesthetic,” says Fiona Firth, buying director at Mr Porter. 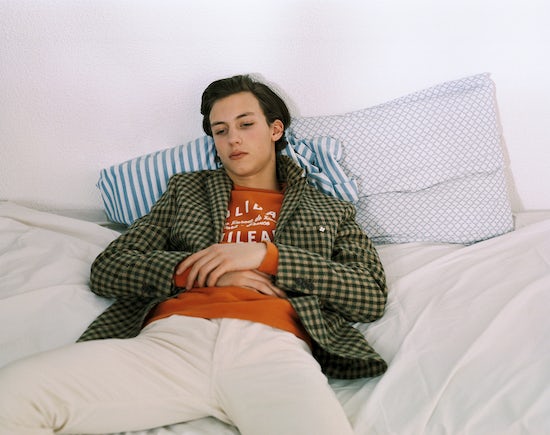 Holiday has moved on from overtly branded pieces — although pastel-coloured sweatshirts and T-shits emblazoned with “Holiday” in simple typography remain the best sellers — to tailored tweed jackets that retail for €995 ($1,200) and floral pants for €345 ($417), as well sneakers and various ceramic plates and mugs. Most will recognise the clothing before the magazine cover.

Durand sees the magazine and the clothing line as entirely separate entities. “The clothes are never linked or used in the magazine, and I’ve never used the magazine to promote the clothes,” says Durand, who founded Atelier Franck Durand where he worked on campaigns for Isabel Marant and Balmain, among others. “It’s not the lookbook of the collection.”

For Andrew Richardson, founder of high-end erotica magazine Richardson, the clothing line — which has become a streetwear label known as much by Gen-Z aficionados as by Kate Moss and Rihanna — was somewhat of an “accident.”

“I’ve worked with Supreme a lot,” says Richardson. “In 2003 James [Jebbia] came and proposed us doing a line of T-shirts.” It took off. The expansion into sweatshirts, and then cut-and-sew pieces came later, thanks to some Japanese manufacturers. Today, the label has two stores in New York and Los Angeles selling everything from simple T-shirts to jackets.

While the magazine was always a passion project and never much of a business proposition, Richardson quickly realised the potential of the clothing label, where growth doubled year-on-year from 2016 to 2017. He also understood that a level of sophistication was required for it to grow. “There’s magazine graphics, which are quite easy to translate into a garment,” he says of the design process. “But we’re interested in a certain silhouette — we make workwear. We’re always attracted to a certain shape. There’s a utilitarian philosophy about the brand.”

We’re happy to cannibalise on the attention. It’s fine if people think the apparel line comes before the magazine.

The magazine i-D relaunched its clothing line in late 2017, reviving a practice popular in the ’80s and ’90s when readers would send a postal order to the i-D offices and receive a logoed T-shirt in the mail. While production remains in-house, most of the collections, which include hoodies, arise from collaborations with artists or industry figures, and share production capabilities — design teams, materials — with them. It may pave the way for future expansion, says Graham Rounthwaite, i-D’s creative director, but it remains a tool for building loyalty, rather than a strategic move. “It’s good to have lots of different connection points with the audience,” he says.

Where the role of an editor was always confined to print and digital, the need for alternative revenue streams and new forms of attracting the reader have expanded the role.

But launching a full-blown clothing line is not that easy, as it demands a whole new skillset and production capabilities, with operational challenges that come with scaling.

“When you come from the magazine world the dynamics in apparel are very different,” says 032c’s Koch. “But there’s a fascinating opportunity in this market, so I think it’s about scaling it up.”

While 032c began as a line of bootleg T-shirts, today it has 3 employees in the production team, as well as a designer formerly at McQueen and Tom Ford. But Koch, who is also editor-in-chief at Ssense, had a leg up in launching the business.