MILAN, Italy — Furla, the Italian handbag and accessories maker, generated revenue of €499 million (about $615.6) in 2017, an increase of 20 percent at constant exchange from €422 million in 2016, confirming consumers’ enduring appetite for accessible luxury brands.

Sales of the family-run company, which sells its Metropolis shoulder handbag for approximately €326 ($403.4), rose 12.9 percent in Europe, the Middle East and Africa (EMEA), its key market, accounting for 46 percent of total turnover. In Japan, its second-largest market, sales were up 15.4 percent, while the US saw an increase of 9.6 percent. The biggest growth, however, came from the Asia-Pacific region, where sales surged 50 percent.

Earnings before interest, taxes, depreciation and amortisation (EBITDA) in 2017 rose 34.1 percent with respect to the previous year. The company did not give a figure for core profits. 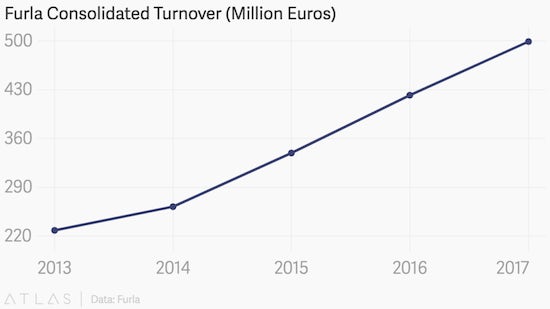 “The organic sales growth confirms that the company is on solid financial ground [and] our widespread growth across all markets reflect our efforts in further strengthening our distribution network,” said Alberto Camerlengo, who was appointed chief executive in 2017.

Furla, which makes the majority of its goods in Italy, is currently present in 100 countries and operates 467 mono-brand stores worldwide (including 253 directly owned), compared to 444 in 2016. The brand plans to capitalise on its EMEA success in 2018 by opening stores in Frankfurt, Berlin and Dusseldorf in Germany and Prague in Czech Republic as well as Las Vegas, Miami and Los Angeles in the United States.

The company’s growth last year was also bolstered by strong travel retail sales, which saw an increase of 14.5 percent in 2017 compared to the year prior, and its investments in digital marketing across all channels, from social media to e-commerce. This includes the conception of its first digitally led campaign ‘The Furla Society,’ which launched last November and reinterprets handbags from the brand’s Cruise 2018 collection as characters in a bar setting. (Each character reflected a bag, from bold and colourful, to confident and sassy, to dark and mysterious.)

“It was very well received,” said Camerlengo of the campaign, which was implemented on Facebook and Instagram, where the brand saw year-on-year follower growth of 120 percent. Meanwhile, a localised Chinese campaign was launched on WeChat, boosting the brand’s follower count to over 1 million.

The Furlanetto family launched the first collection of Furla-branded handbags in the 1970s and the brand has since become known for its minimalist style. However, the label still trails its middle-market counterparts such as Longchamp, which recorded €553 million ($642.5 million) in sales revenue in 2016, and Tapestry-owned Coach, which net more than $1 billion in sales in 2017.

Furla has been working for a Milan listing after signing an agreement with Tamburi Investment Partners (TIP) in 2016, but delayed its plans to go public last year. Camerlengo had no update on the timing of the proposed listing.