For their new flagship on the Champs-Élysées, a historic avenue that has lost some of its lustre, Galeries Lafayette has hired the avant-garde architects of Google's new HQ.

For their new flagship on the Champs-Élysées, a historic avenue that has lost some of its lustre, Galeries Lafayette has hired the avant-garde architects of Google's new HQ.

PARIS, France — Halfway up the Avenue des Champs-Élysées on a recent, unseasonably mild Sunday, a crowd surrounded a street performer cartwheeling to electronic dance music in front of a branch of beauty emporium Sephora. Couples and families carrying shopping bags from Abercrombie & Fitch, Nike and H&M paused to watch the show, while clusters of teens filled the sidewalk. A lively high-street scene? Absolutely. A glimpse of high-end Paris? Not so much.

But for Galeries Lafayette, 52 Champs-Élysées marks the site of a future flagship — positioned as an upmarket department store for the 21st century — and a major step towards endowing the legendary boulevard with renewed cachet.

Much depends on its realisation by Danish architectural firm Bjarke Ingels Group (BIG). The company, based in Copenhagen and New York, specialises in unapologetically imposing buildings, from the nearly completed residential project Via 57 on West 57th Street in Manhattan to Google’s glass-roofed future headquarters in Silicon Valley. Galeries Lafayette, however, will be the company's first retail client.

“It has to be, somehow, the biggest concept store that has been built on the Champs-Élysées,” says Nicolas Houzé, chief executive officer of Galeries Lafayette.

The new location represents more than an ambitious business expansion for the family-owned chain of department stores; it fulfills a plan envisioned by Houzé’s great-great-grandfather, Galeries Lafayette co-founder Théophile Bader, who acquired the site for a second store [the first store on Boulevard Haussmann dates back to 1912] towards the end of the 1920s.

Not long after the Wall Street Crash of 1929, Bader sold the property, which subsequently became a bank constructed during the high Art Deco period. Most recently, a Virgin Megastore occupied the space until it ran into financial difficulties in 2013. Galeries Lafayette will be leasing the property from Qatar Investment Authority (QIA), which has several investments in Paris including the Royal Monceau and Peninsula hotels. In 2012, QIA purchased the entire 27,000-square-metre building for €500 million (about $566 million). 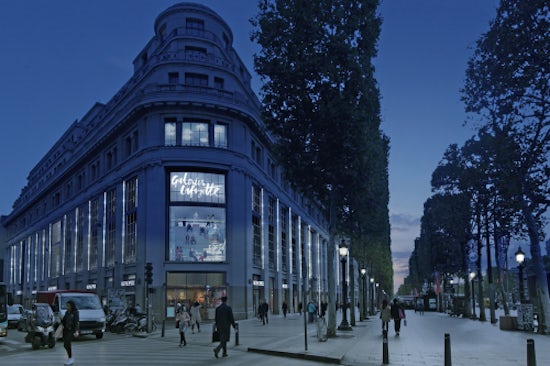 With 7,000 square metres of retail space, the new Galeries Lafayette store will be roughly one-tenth the size of its Boulevard Haussmann location, which generated about €2 billion ($2.3 billion) of sales in 2015. Houzé says it is too early to confirm the number of SKUs and employees.

Speaking with BoF, BIG founding partner Bjarke Ingels shares features from his proposed plan. First, he insists the Art Deco heritage of the building serves as a fundamental point of departure for BIG’s design and that the plan will respect the existing architecture rather than radically transform the space. Focal points include “the circus,” a translucent floor on one of the upper levels that offers multiple configuration possibilities for events; an “observatory” gathering space overlooking the avenue (“The best seat for watching the final stage of the Tour de France,” says Ingels); the transformation of the bank’s vault into a moving image archive; and an “infinite vitrine” that will play photographer Melvin Sokolsky’s black-and-white images from 1963 of models suspended in bubbles.

“We are inheriting a big, beautiful building that has been there for a century. So we are mostly moving around within it and playing with elements that have already been established. And I think it is going to feel like a joyful and playful environment for people to shop,” Ingels says. The restoration of a concealed skylight will be treated in a modern way, not as a replication of the iconic Boulevard Haussmann cupola, he notes. “We’re taking that element and letting it bleed out across the store, so that the lighting behaves in a similar way as when the clouds move over Paris.”

BIG was selected from a competition that included four leading international architectural firms. That BIG lacks a traditional track record in retail has, to some extent, worked to its advantage. “We wanted an architect who is able to understand the world like it is now, including sustainability, technology and customer experience,” says Eric Costa, president of Citynove, the property division of the Galeries Lafayette Group.

When asked why the company chose not to commission Rem Koolhaas' OMA, who are already involved with designing the department store’s art foundation, Costa says that the decision to select BIG was based on the firm’s disruptive thinking and that OMA was already working with German department store KaDeWe in Berlin. “We were confident to work with new architects,” he says.

The choice of BIG signals potential for the Champs-Élysées, which today would have a hard time defending its historical reputation as “the world’s most beautiful avenue.” While brands such as Tiffany & Co. and Banana Republic have settled on the street in recent years, none of the new arrivals come close to Louis Vuitton’s multi-level 'maison' at the corner of Avenue Georges V or Cartier's boutique, a stone’s throw from the Arc de Triomphe.

Restaurant options along the strip are overwhelmingly mediocre. Add the car showrooms and the consensus is that the avenue now feels like the most ‘un-Parisian’ part of Paris. According to the Comité Champs-Élysées, between 200,000 and 300,000 people walk along the avenue each day. Of this impressive number, only half are tourists from outside the country (the remaining half consist of visitors from outside Paris as well as those working in the area). 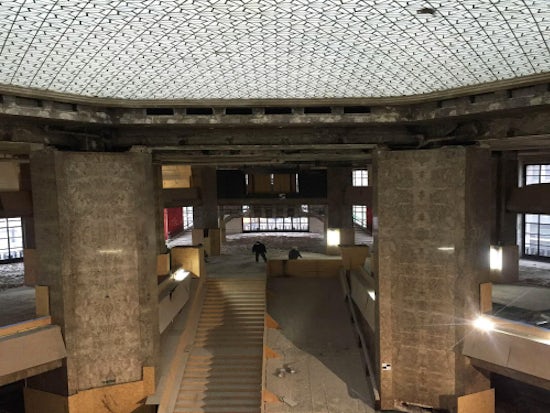 Arguably, Galeries Lafayette will benefit from the high volume of foot traffic, no matter how the avenue is perceived. Houzé notes that the Champs continues to attracts tourists from the Middle East, as well as a higher percentage of individual shoppers who frequent the Haussmann flagship. “We are targeting all those kind of customers — international but also French.”

According to Christian Nehmé, who co-heads the retail department of Savills in Paris, the Champs-Élysées has been more attractive for 'premium' retailers — rather than luxury brands — within the last few years. And even if some of those customers stayed away in the immediate aftermath of the November terrorist attacks which struck the city, he says the current uncertainty has negligible impact on the Champs-Élysées, where annual rent for retail space remains higher than anywhere else in the city at €21,000 (about $23,786) per square metre, compared to €10,000 to €12,000 ($11,327 to $13,578) for Rue Saint-Honoré and €9,000 to €12,000 ($10,183 to £13,578) for the Avenue Montaigne. “Luxury brands don’t need to be on the Champs-Élysées,” he says, adding: “Galeries Lafayette is not a luxury brand — they have a mix for everyone.”

Jean-Noël Reinhardt, the former chief executive of Virgin Megastores in France and current president of the Comité Champs-Élysées, maintains that the avenue’s appeal is its mainstream mix of retail and entertainment. As he sees it, the arrival of the Galeries Lafayette, as well as a forthcoming Apple store at No. 114, will not transform the strip into a luxury retail destination as much as enhance its overall desirability — both for customers and other prospective businesses.

“Whatever they come with, they will reinforce the premium aspect and that’s something which really symbolises what the Champs-Élysées has to be. It’s a kind of crystallisation of this positioning,” says Reinhardt. This positioning, he adds, is not necessarily aimed at locals. “With 180,000 people passing near the Champs-Élysees everyday to work, do you really think this is where Parisians come to rest? No. But we also know that when we create the conditions for Parisians to spend a nice moment here, they are coming.” In January, Anne Hidalgo, Mayor of Paris, announced that the entire 1.9km stretch of the Champs-Élysées will be limited to pedestrians one Sunday per month starting this year, following a widely praised Sunday without cars last September.

In addition, customers will find that the new store, like many others on the Champs, will be open on a day when businesses are legally obliged to close. This would have been a considerable advantage for the flagship — except that by the time the work is completed, an amended law is set to take hold. Says Houzé, “I’m quite confident that Galeries Lafayette Haussmann will be open on Sundays before 2018.”

Editor’s Note: This article was revised on 10 February, 2016. Due to an editing error, an earlier version of this article misstated that BIG was selected to design Galeries Lafayette’s Champs-Elysées flagship after a competition that included Rem Koolhaas' OMA. This is incorrect. OMA was invited to enter the competition, but the firm declined.