After 16 years leading the women's title at Condé Nast, Leive is resigning at the end of the year. It marks the fourth departure of a long-time editor in less than two weeks. 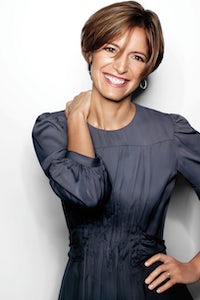 After 16 years leading the women's title at Condé Nast, Leive is resigning at the end of the year. It marks the fourth departure of a long-time editor in less than two weeks.

NEW YORK, United States — American Glamour editor-in-chief Cindi Leive is stepping down from her role at the Condé Nast title after 16 years. A representative for the publisher said a successor has not yet been named and will likely not come immediately. Leive will stay on until the end of the year, just like Vanity Fair's Graydon Carter, who announced his resignation last week after 22 years leading that title.

"I’ve loved being in conversation with women over the last decade, and I’m excited to go deep into projects that stand to improve women’s lives," wrote Leive in an e-mail to staff on Thursday. "This is an electric moment for women and activism, and I plan to be part of that. But this is not goodbye: I’ve told Anna I will stay to see all our fall projects — including, of course, Women of the Year — through to completion."

"Cindi brilliantly edited Glamour for the past 16 years and I want to thank her for her creativity, passion, and dedication," said Anna Wintour, American Vogue editor-in-chief and Condé Nast artistic director, in a statement. "She expanded Glamour from a beautiful monthly print magazine into a relevant brand in digital, video and social media, successfully laying the groundwork for a new generation of leaders and audiences."

"When Cindi took the helm of Glamour in 2001, it was a monthly print magazine; today, Glamour is a full-fledged, multi-media brand that connects with audiences across digital, video, social, experiential, and print," wrote Bob Sauerberg, Condé Nast's chief executive, in a company-wide memo thanking Leive. "Cindi will cap her tenure at Glamour on a high note with the brand’s annual Women of the Year celebration, held for the first time in Brooklyn. And she will stay on to help with a seamless transition to a new editorial leader.

Over the past week, four longtime magazine editors have announced their resignations: Carter from Condé Nast's Vanity Fair after 25 years, Robbie Myers of Hearst's Elle after 17 years and Nancy Gibbs of Time Inc's Time magazine after four years at the helm and 32 years at the title. Hearst announced Marie Claire creative director Nina Garcia as Elle's new editor-in-chief, but the rest of the successors have yet to be named.

Leive's career at Glamour goes back long before her time as editor-in-chief. She climbed the ranks for 11 years at the title from editorial assistant to deputy editor, before being named editor-in-chief of Self magazine in 1999. In 2001, she took over Glamour and lead the magazine to become, at one point, Condé Nast's most lucrative title. With a total paid and verified circulation of 2.3 million as of June 2017, it is still the publisher's title with the most reach. One of Leive's most important legacies at Glamour is the Women of the Year awards, which honour inspirational women across fashion, politics, education, sports and more each year and is the magazine's biggest event.

What Leive might do next is still unclear. “I’m not going to another big media job or to a similar position at another company,” she told the New York Times. One interesting move could be public service: In 2016, Leive launched The Girl Project, the magazine's philanthropic initiative dedicated to girl's education, which worked closed with Michelle Obama's "Let Girls Learn" initiative.