How Gosha Rubchinskiy and Adidas Are Refashioning Football

How Gosha Rubchinskiy and Adidas Are Refashioning Football

KALININGRAD, Russia — “It is a riddle, wrapped in a mystery, inside an enigma,” said Winston Churchill in a 1939 radio broadcast on his inability to predict Russia’s intentions during the Second World War. Fashion insiders and streetwear fans faced a Russian riddle of their own in trying to decode designer Gosha Rubchinskiy’s decision to show his latest collection in Kaliningrad, a small but strategically important Russian exclave on the Baltic Sea between Poland and Lithuania, which was annexed by the Red Army in 1945, after the defeat of the Third Reich in the very same war.

Like Churchill’s riddle, the mystery of why Rubchinskiy’s eponymous, skater-inflected fashion brand — born from Moscow’s youth scene — would stage a show in Kaliningrad, in a return to Russia after several seasons of showing in Europe, is multi-layered. Even more so because the event comes at a time of heightened tensions between Russia and the West, historical foes, which, only days ago, seemed to face-off yet again after American intelligence agencies concluded that Russia’s interference in the recent US presidential election was endorsed by the very top of Russia’s political establishment. 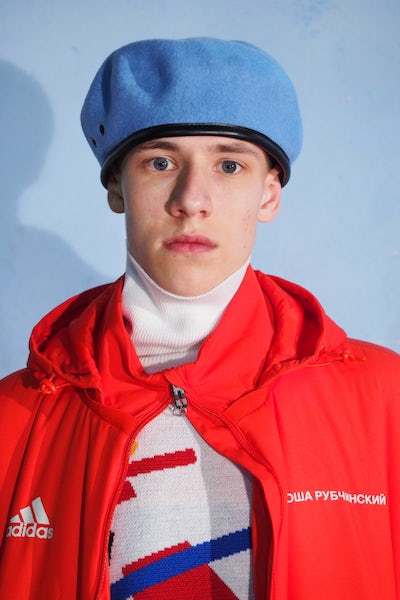 But the key to solving the Rubchinskiy riddle starts with the history of Kaliningrad, which was previously part of Germany, and the label’s new partnership with the football division of German sportswear giant Adidas, which debuted on the runway at the former Königsberg Stock Exchange (later remade as a Soviet youth centre) here on Thursday.

“I chose Kaliningrad out of respect for Adidas. In Russia and the USSR, sports teams always wear Adidas uniforms, so historically the brand means something for Russian people,” Rubchinskiy begins. “Kaliningrad used to be German before the end of World War II and they still have some amazing German buildings — including some of the oldest football stadiums — and I thought it was a perfect place to present a collaboration between a Russian brand and German brand, because this place has the spirit of both.”

In a market saturated with fleeting, one-off fashion collaborations that can sometimes feel inauthentic, Adidas Football x Gosha Rubchinskiy is a longer-term initiative, set to unfold over three seasons in the run up to the 2018 World Cup in Russia, which Adidas is sponsoring. Alongside product, the output of the collaboration will also span content and events — including two more runway shows — in Russian cities hosting the World Cup. “It’s early stages, so we're not sure yet. There will be a book. There might also be a capsule collection with the World Cup. The big event will be with the World Cup,” reveals Adrian Joffe, president of Comme des Garçons, which owns and operates the Gosha Rubchinskiy label.

But fashion and football can make for strange bedfellows, especially in Russia, whose gangs of hardcore football fans, often dominated by right-wing militants, cast a shadow of violence over the Euro 2016 tournament in France last summer. “It’s interesting for me to show an image of a more modern Russian football fan,” counters Rubchinskiy, who is integrating product from the Adidas collaboration — which, this season, includes coats, jerseys, track pants, hoodies, sneakers and accessories like hats, bags, scarves and beanies, all emblazoned with “Football” in Cyrillic script — with pieces from his main collection, both on the runway and at retail. “I wanted to mix it with Gosha items. In Moscow, I walk around my area and see young guys coming back from a football game and they are still wearing sports pants but with a coat.”

I want to prove that you can show international ideas but in a small Russian city; I want to show the end of globalism.

“We wanted it to be an integral part of Gosha’s collection; we didn't want him to be hired out for a separate collection,” says Joffe. Rubchinskiy’s Adidas product will be priced accessibly, at about 20 to 30 percent more than equivalent Adidas Football items, according to Joffe. But distribution will be limited to about 120 stockists, including Comme des Garçons’ own Dover Street Market stores. “If you want something, you must do something for it,” explains Rubchinskiy. “You must go to a special store. I remember myself as a teenager. We were waiting for new singles from our favourite bands. I want to keep this idea,” continues the designer, who has called streetwear the new music.

“We wanted to protect the name. We wanted to keep it special. We do all the distribution. Adidas are not allowed to distribute it — no football shops,” adds Joffe. “There’s no license, no formal agreement, no royalty. Gosha designs it, Adidas makes it and I distribute it. I make my money with the usual mark-up and I pay Gosha. There's nothing financial between Adidas and Gosha. It's an easy contract.” 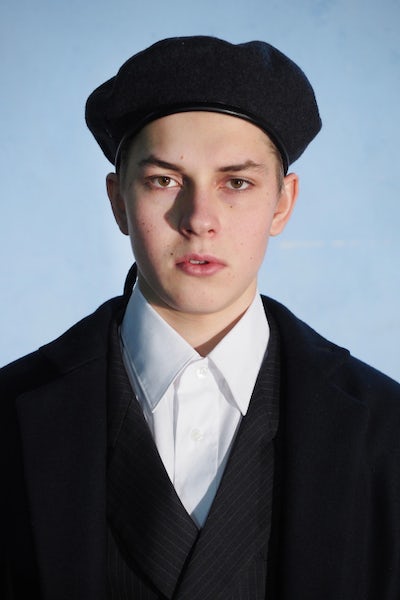 The Adidas product comprises about one-third of the SKUs in Gosha Rubchinskiy’s Autumn/Winter 2017 collection, but will make up about half the label’s annual turnover, which is expected to grow by 150 percent in 2017, according to Joffe. Comme des Garçons generates about €280 million ($300 million) per year in sales revenue, but declined to break out specific figures for the Gosha Rubchinskiy label.

But for Rubchinskiy himself — who sees his work as “international but with a Russian accent” and has previously embraced Russian nationalist symbols like the Soviet hammer and sickle, and hacked together the Tommy Hilfiger logo with the Russian and Chinese flags — the collection he decided to show in Kaliningrad is about more than sales figures. Indeed, it holds deep personal and political significance in a world being reshaped by growing tensions between globalism and localism, reflected in Britain’s Brexit vote, the election of Donald Trump and the rise of Russian nationalism. “Today, people don’t believe in globalisation. People are scared of other people and of losing their identities,” says Rubchinskiy.

“There was a second reason for me to show in Kaliningrad,” he reveals. “It’s Russia and it’s a small city, but at the same time it’s in the middle of Europe. I want to prove that you can show international ideas but in a small Russian city; I want to show the end of globalism. It’s more interesting to see what is happening in small cities. It’s more interesting to see what’s happening in Kaliningrad than New York.”

The collection also transcends football in a literal sense: Rubchinskiy sees football as a broader metaphor for the geopolitical “game” being fought between opposing nations, a contest recently brought into sharp relief in Kaliningrad itself by Russian deployments of nuclear-capable Iskander-M missile systems, which some analysts see as retaliation for a planned US missile defence shield in eastern Europe.

But as with football, Rubchinskiy believes that globalism and nationalism can co-exist in the wider world. “The World Cup is a competition between countries, but it can unite people,” he says, adding that skateboarding, music and other forms of youth culture can also be forces for expressing local identity while building communities across nations.

It's easy for international brands to talk about culture with a broad brush, but culture is created in local communities.

For Rubchinskiy, Kaliningrad is a return, not only to Russia, but to the approach he took with his very first show, a deeply political and DIY affair featuring a collection named “Evil Empire” (a term applied to the Soviet Union during the Cold War by US president Ronald Reagan), which contained Russian nationalist symbols like bears and Kalashnikovs. “When we started in 2008 with our first show, it was more like a performance than a fashion show. It was also about politics. With the Georgian conflict, many in the press were against Russia. It was my answer to all of it,” he explains. “I was like, ‘You say we're evil? Ok, then, why not?’ We wanted to scare them, that's why we used all the bears and guns.”

“It was only me and a few friends. We did everything by ourselves. I think it was one of my best shows and, this season, I wanted to come back to my roots. This season, it’s very Gosha-personal,” continues Rubchinskiy, who, for the Kaliningrad show, took direct charge of everything from casting and styling to hair and make-up, working hand-in-hand with Moscow-based Pavel Milyakov, aka Buttechno, to create an original soundtrack.

Culture, authenticity and the balance between globalism and localism are certainly at the heart of the partnership for Adidas, which is revamping the way it designs and markets its football products, a significant source of sales for the sportswear group, which posted revenues of €16.9 billion in 2015. “A big part of our strategic and creative change was to think about football as much more than a sport, but an incredibly important part of youth culture,” explains Sam Handy, vice president for design at Adidas and Adidas Football creative director.

“In Moscow, we met a group of kids playing football in a cage in a backstreet,” he recalls. “It was about minus five degrees and they were in track pants playing very seriously. The energy that these guys had and the way they spoke about this sport as a way to express themselves felt to me a lot like the energy in skate culture.”

“I’m interested in seeing how Adidas Football looks through Gosha’s lens. We’re a brand that is very open-source with creative partners,” continues Handy. “Of course, we are still sponsoring the Champions League and the World Cup, but it’s about extending our reach from being a sponsor to being embedded in the heart of the culture of the sport.”

“It's easy for international brands to talk about culture with a broad brush, but culture is created in local communities,” he adds. “Football is also a tribal sport, where localism is important. You play it because you want to talk about where you come from, you support a team because it’s your city. Of course, it’s a global phenomenon. But it’s incredibly important for Adidas to see the beauty of local expression in sport.”