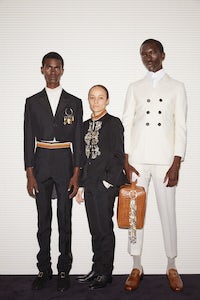 PARIS, France — Maybe it was a sign of things to come. While getting a closer look at Grace Wales Bonner’s collection, Marc Jacobs told her how much he loved the jacket she was wearing, which featured Wales Bonner’s signature cowrie shell and crystal embroidery. Delphine Arnault, executive vice president of Louis Vuitton and the woman behind the LVMH Prize, agreed. A few hours later, Bonner became the third winner of the LVMH Prize, receiving €300,000 and a year’s worth of mentoring.

Bonner is most prominent in menswear (she has recently started adapting some pieces for women) and her work has aimed to show a soft and sensual vision of blackness, which is often associated with aggressiveness in the wider culture. She is admired for her emotional presentations, her choice of beautiful, black male models and her ability to meld Western tailoring with influences from Africa, India, or — most recently — the Caribbean. Another aspect of her design is what she calls “hybridity,” an aspiration to allow different cultures to coexist on their own terms in fashion design, evident in her latest collection for Spring/Summer 2017, which she showed during London Collections: Men. Doing research on Joseph Boulogne, Chevalier de Saint-Georges, an 18th century composer and violinist from Guadeloupe, she was attracted to the idea of creative men like him, who were integrated into European culture but were able to bring something of their original culture into their work — and dress.

On how she plans to use the prize money, Wales Bonner said: “I first want to focus on growing the team and to look after the people that have been working with me out of love. But I don't want to change my path. I had a very clear view of what I do before this, and that's not going to change. I will continue to show in London,” she assured anyone afraid of possible plans for relocation. “I think that there are so many great designers there right now and I want to be a part of that moment.”

While several of the young designers talked about the seal of approval they felt in being shortlisted by the jury — comprising designers Jonathan Anderson, Nicolas Ghesquière, Marc Jacobs, Karl Lagerfeld, Humberto Leon, Carol Lim, Phoebe Philo and Riccardo Tisci, along with Delphine Arnault, Jean-Paul Claverie and Pierre-Yves Roussel of LVMH and a panel of forty additional experts, Bonner explained that she thought “you have to get validation from yourself and the work itself. For me it’s more about the research and a new way of presenting masculinity.”

“Grace Wales Bonner has a unique vision and point of view,” said Arnault. “And the work that she does on the tailoring is very interesting. The way she uses the embroidery, the cuts are perfect. But the jury also thinks that she has a great potential in womenswear.” Bonner is the third Central Saint Martins graduate to win the main LVMH prize, with Arnault acknowledging that London has amazing schools, with many fashion designers in the luxury group have studied in the British capital.

At the announcement, Arnault revealed that this year the jury had also decided to award a Special Prize because of how “intense” the competition was. This went to the 19-year-old, self-taught Vejas Kruszewski, based in Toronto, Canada, who walked off with €150,000 as well as mentoring from LVMH executives. Kruszewski described his off-beat designs as “starting with familiar garments and then twisting them a bit.”

There’s an of-the-moment quality to the slightly unisex garments and Vejas showed a selection of pieces from the last three collections to the jury. “[Jury members] Humberto Leon and Carol Lim are stocking six of the eight finalists, and they said Vejas has amazing sell-through, so he has a unique point of view but also a client — someone is buying the clothes,” said Arnault.

For his part, Kruszewski said the runner-up prize opened up new options for what the brand might do and mentioned wanting to expand into new product categories, but on his mind right after his win was “a nap, then dinner.”

The first LVMH Prize winner in 2014, Thomas Tait, was said to be chosen because of a belief that the money and the coaching would make a big difference to the designer, while the 2015 winners Marques’ Almeida already had a business and needed to build more of a team. For both previous winners, though, the prize seems to have spawned a more focused, professional approach. “[Winning the prize] gave me a chance to see my brand from a bird's eye view,” Tait explained in a text message. “Working with LVMH can be a refreshing and highly motivating experience and an insightful view of the corporate side of the industry.”
In a crowded field, the LVMH Prize has quickly established itself as one of the most important fashion awards in the business. Partly, it is because of those four capitalised letters, but at the same time, the fact that the jury consists of the most revered designers of today also gives the prize a certain edge. As well, nearly all the designers in attendance today singled out the mentoring component as the most alluring aspect of the prize.

While Tait’s business has yet to take off, Marta Marques and Pablo Almeida told BoF that the impact of winning the prize last year had been very clear. “Sales doubled and the team grew three times,” the designers said. “It also bought us time to focus on the design.” At the same time the mentoring meant that “boring questions” like “Where do you find a warehouse?” could be discussed with someone with a proper knowledge of the supply chain. (A chat with the mentor and senior vice president of fashion ventures at LVMH, Sophie Brocart, revealed that the designers sometimes ask very specific questions like what kind of coding system to use for garments.)

So according to the winner herself, why did she triumph this year? Grace Wales Bonner, a highly cerebral young designer, said: “I think my work resonates with people and that my kind of emotional dressing translates to them in a broad way.”