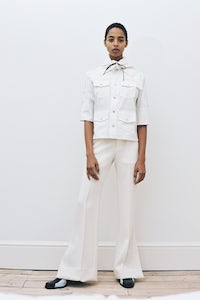 LONDON, United Kingdom — Following an image teased on Instagram on Saturday of a female model wearing a white blazer with black trousers, the London-based menswear designer has confirmed to BoF that she is launching a dedicated 12-piece womenswear collection, to be released in June.

The capsule is a continuation of the brand’s Autumn/Winter 2018 menswear collection, which showed at London Fashion Week in January. “It’s all coming from the same world, but it’s an extension of that,” Wales Bonner told BoF. “I’m coming from a female’s perspective, exploring masculinity somewhat, but [the collection] is more informed by the way I dress.”

Wales Bonner graduating from Central Saint Martins in 2014 and was quickly tipped as one of the most promising newcomers in fashion and was the recipient of the 2016 LVMH Prize. The launch marks an opportunity for the designer to translate her aesthetic across new product categories. “With womenswear, the collection is focused on tailoring. That’s something I’m interested in exploring, as that’s the core element of the brand,” she explained. “That said, I still designed the collection on a man’s body, so then it’s about how to incorporate that onto a woman’s body.”

According to the designer, women have made up a significant part of the Wales Bonner customer base since its inception. “The fact that we have had, from the first collection, womenswear clients — a woman has always been present in my mind,” she said. “The menswear collection is so open to interpretation and I have had such a good response from women, so it felt like a natural progression.”

The launch also comes at a time when brands and retailers are blurring the distinction between mens and womenswear, as more consumers look to shop across categories. “There are a lot of men’s accounts that we work with that are starting to do womenswear as well — a lot of my stores are buying with women in mind,” she said. Indeed, Matchesfashion.com and Dover Street Market have sold Wales Bonner under the womenswear category for several seasons.

Looking ahead, the designer isn’t ruling out footwear and accessories. “It’s taken me some time to explore ready-to-wear, but I’m open to new opportunities and expanding into different [product] categories,” she said. “There are some exciting new things coming out this year.”