MILAN, Italy — Gucci is getting serious about customisation.

On Saturday, during men’s fashion week in Milan, the Italian fashion house will introduce the second phase of its Gucci DIY (Do It Yourself) service, offering customisable men’s tailoring, unisex jackets and shoes for both men and women.

Gucci DIY was first launched in May 2016 with the brand’s popular Dionysus bag — recognisable by its signature clasp — customised with whimsical embroidered patches. The next round of offerings, showcased in the window displays and in a dedicated area at the brand’s flagship store on via Montenapoleone in Milan, is more expansive. It’s also a testament to creative director Alessandro Michele’s desire to communicate to clients that “the way you dress is an expression of your personality, and that men and women should feel genuinely free to enjoy self-expression,” according to a statement released exclusively to BoF by the Kering-owned company. 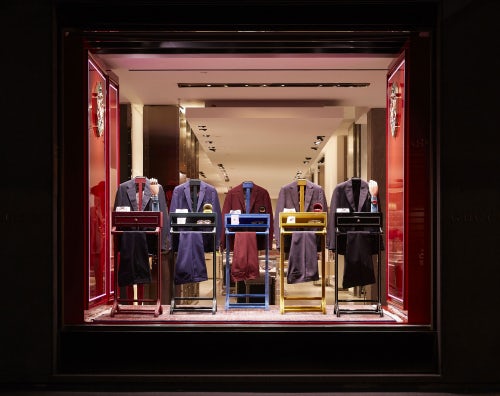 Gucci DIY Display at the flagship on via Montenapoleone | Source: Courtesy

The men’s jackets, blazers, tuxedos and coats — in a variety of silhouettes — are meant to underscore the house’s tailoring capabilities. While clients can choose from a portfolio of fabrics and buttons, Michele’s sense of play is best expressed in the monogram lettering options, as well as the jacket linings, which come in a wide range of colourful-and-bright patterns rendered in silk foulard. That same fabric is also available for trouser waistbands. Knitwear and silk printed shirts will be decorated with monograms and novelty symbols, while eveningwear-appropriate silk shirts can be tweaked with new collars and cuffs. The more complex offerings include exotic- and calfskin leather biker jackets that are studded and hand-painted.

Given that Michele plans to show his men’s and women’s collections together beginning in 2017, it’s no surprise that several of the DIY-able items are purposefully unisex, including reversible silk bombers and denim jackets.

Like a customer at a tattoo parlour, clients will have a range of motifs to choose from — including kingsnakes, flowers and bees — which speak to the new language Michele has established for Gucci since he was installed as creative director in January 2015.

Gucci’s “Ace” white leather sneaker — defined by the house’s signature red-and-green stripe trimming its heel and side — can be embroidered with the wearer’s initials, while a “dressy mule” can be further dressed up with the addition of a horsebit, embossed initials, or a tiger’s head patch. Men’s dress shoes, too, can be gussied up.

“By providing customisation options, brands raise loyalty at a time when it’s more important than ever,” according to a 2013 report from consulting firm Bain & Company. “Customisation also helps companies reach specific consumers—such as the unpredictable millennial generation shoppers, a group known for their fast- moving preferences,” it continued. “As a growing consumer force, young shoppers demand more individualised products than their older counterparts—they’re not a one-size- fits-all generation.”