Guido Palau, an Eye in the Fashion Week Hurricane

Guido Palau, an Eye in the Fashion Week Hurricane

NEW YORK, United States — Backstage before Alexander Wang’s Autumn 2017 runway show, staged at a dilapidated Harlem theatre, a mass of photographers, makeup artists, hairstylists, beauty editors, publicists and models squeeze in and out of rows of mirrors and counters covered with brushes, curling irons and shadow palettes. Everyone in sight is dressed in shades of black and grey — it was Wang, after all — with the exception of one man: at the centre of the hubbub is Guido Palau, one of the most sought-after hairdressers in the industry, wearing a bright yellow plaid shirt.

"This season we haven’t done as many cuts, or maybe I’m just used to it,” he says, addressing a crowd of editors, each holding up their iPhone to record him during one of several press conference-style addresses. “It’s only 6 or 7 girls that we cut their hair, but yes there are some cuts in there.”

He glanced over at a board detailing the model lineup to remember exactly which girls he had made over for Wang. As he stepped closer, the ring of editors stuck to him like glue, a silent herd in the centre of a bustling backstage circus. He then listed the Redken products he had used to make the models look like they had been out partying all night, part of his role as global creative director for the professional haircare brand.

A few days after the show at a restaurant in Chelsea, Palau explained his day-of-show duties: “Backstage you have to be the boss, the technical hairdresser, the interviewee, a confidant to the designer — and all those things are things that you might have to do within five or ten minutes."

“When I first started in the industry doing shows in the mid-90s, a big show was 23 girls and you could be much more hands on. Now an average show is 60 models… there’s a lot more press, there’s a lot more requirements from the brand backstage, lookbooks that are happening, videos, Instagram — there's a lot more going on.”

And a lot more shows. In New York alone, Palau does the hair for about ten shows, including Marc Jacobs, Tory Burch, Yeezy, Ralph Lauren, Coach and Calvin Klein. This month he’ll tackle about 30 fashion shows from New York to Paris.

“Guido sees the individual beauty in a girl, and at the same time he sees the collection, the full cast, the season’s concept as a whole,” says Wang. “He’s always able to take my direction or inspiration and add an additional twist.”

As Palau cannot possibly do every model’s hair himself, he develops an overall creative vision which he communicates to a team of 10 to 12 assistants at a test run that typically takes place two or three days before a show. “Every show, every season changes. There's not one rule of thumb,” he says. “If a designer is thinking about using hair pieces, wigs, or something like that, the process will start before.”

Once backstage clears out and the models begin to change into first looks, Palau ensures every hair on every head is right where it needs to be. “It doesn’t matter, really, how much prep you’re doing, that’s the moment it can be good or bad, because the girl goes out for a cigarette and then she’s pulled her jumper off and then your technique is gone,” he says. “At the end of the day, I am there to help the designer create his vision. It's not about me, it's about him. It doesn't matter if it's just a ponytail or just tucked on the ears, there's a good and there's a bad version of that. And I am there to give the best version of it that I can give without letting anyone know how stressful that is. That’s my job,” he says. “There are so many variables.”

Indeed, variables are constantly running through Palau’s mind: like how too much humidity might ruin straight hair or how a model’s shoes might make her hair bounce unintentionally.

Linda Wells, chief creative officer of Revlon and the founding editor of Allure, says designers hire Guido for his problem-solving approach: "There’s an assurance of excellent and consistency and it’s also a very easy meeting of minds. He speaks the language, he understands the short hand and when they are stressed he can change it quickly. And that’s a real talent, besides the ability to do great beauty and be creative."

Palau began his career at Vidal Sassoon in London in the mid-1980’s. He soon started working with photographer David Sims, who encouraged him to develop his own approach to hair. “[Sims] said, ‘Do the hair that you know,’” recalls Palau, calling the photographer and long-time friend his first great teacher. “That's what he was doing with his photography and style. He taught me to [show] reality: ears sticking through.. the awkwardness of what was considered bad hair — but why is it bad?”

Palau’s career took off when he worked on George Michael’s “Freedom” music video in 1990 and a 1993 Calvin Klein campaign starring Kate Moss. He and Sims, avid contributors to London style bibles i-D and The Face, became synonymous with a grunge realism that dominated fashion photography in the 1990s, a swift sea change from the high-voltage glamour of the previous decade. 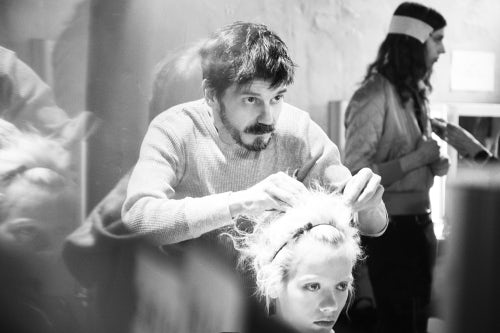 “The first thing that Guido did that was so notable was that he almost made it look lanky and real and undone… He would try to duplicate the way a girl would look if she woke up and pretty much didn’t even brush it,” says Wells. “And then from there, he’s able to do absolutely anything… He has the ability to continually be new and always looks ahead. And it’s that enormous curiosity and creativity that really distinguishes him.”

Right now, fashion is all about undone, natural hair, which often makes Palau’s job simpler, but not necessarily less challenging. “The beauty aspect of the show is very important because you instantly get what the designer is trying to convey… In different times you would be talking about big gestures like ‘Oh, is that an 18th-century pompidou?’ And now it's funny how you’ll talk to the designer about the minutiae of a natural look — ‘Should we wash it the day before or two days before?’”

Palau cites Steven Meisel as another important creative collaborator. "If you’re lucky enough to work with someone like him for such a long time, you begin to see his eye,” he says. “My work is at it’s best when I feel that everyone has got my back and I can just go. Steven, for example, is a great supporter of his team and he enjoys the process of watching you work.”

“You have to listen and be open and embrace it and I feel, along my career, that I’ve come across and been lucky to work with great teachers. It’s not that I’m the best hairdresser in the world — there are far better hairdressers — but what I think I have been very good at is tapping into style and creating characters,” he said. “It’s your vision of the hair, but it's a collaborative thing because you're working to create a character for someone, for the photographer or the designer.”

"Guido is not just the best hair dresser, but also art director and stylist. Every image and show he's involved with oozes his hand,” says Katie Grand, editor in chief of Love magazine. “He’s my favourite creative ever.”

Palau is conscious that more people are watching him than ever before, especially on social media, where his work has spurred controversy. The wool dreadlocks he designed for the Spring 2017 Marc Jacobs show enraged the internet as soon as the first model’s sky-high platform boot hit the runway, because the inspiration point cited by the brand was rave culture, not black culture.

“People are entitled to their opinion and I get where people are coming from. Will it ever be worked out, really, what is [politically correct], what isn’t PC? Whenever I’ve done anything that may be criticised by people, not that it matters to those people, but it always come from a point of view of celebrating style and women,” says Palau. "I get the point, but to not merge different cultures and to not merge different styles would be to make things less interesting. And when I look at different cultures and the way that they present themselves, the way they do their hair, maybe culturally they’ve done it for some reason that I’m aware of — it’s not like I am unaware — but it inspires me,” he said. “Style is, to me, everywhere.”

“When I do hair, there’s a feeling I get inside when I know it’s hit a right moment,” he continues. “It could just be a flick of a hair or it could be something subversive in one bit. That's what you live for, really, and it’s a fleeting second. There might be only four people in the room that see it or feel it, but that doesn't matter.”

“When you've been doing it for thirty years, you have your reputation and also you want to better yourself, push your boundaries, excite the people you’re working with,” he adds. "You always have to be working the next job. It doesn't matter that I did those great cuts at that show, it's the next show, it’s the one I'm about to do, it's the one this afternoon.”

Indeed, as one show ends, another begins and Palau — and the hurricane of fashion week — isn’t slowing down any time soon.

How Beauty Brands Tap Backstage and Beyond