For the past four years the British department store has been revamping its 220,000 square foot flagship store in London’s Knightsbridge. Today it unveils the latest phase of the multi-million pound project.

For the past four years the British department store has been revamping its 220,000 square foot flagship store in London’s Knightsbridge. Today it unveils the latest phase of the multi-million pound project.

While the British department store group has eight locations across the UK and Ireland, as well as seven international locations across Turkey, Hong Kong and the Middle East, for the past four years it has focused on revamping its 220,000 square foot flagship store in London’s Knightsbridge. It declined to disclose how much had been spent on the project, only noting it was a “multi-million pound investment.”

However, the expensive project has plunged the retailer into the red: last year the Harvey Nichols Group reported a loss of £6.7 million ($8.8 million) before tax in the financial year ending April 2017, while group EBITDA for the year ending April 2017 was £7.3 million, compared with £12 million in 2016. Turnover was flat on the previous year at £194 million.

Plus, the group recently made significant changes to its management structure. Last September, it announced that chief executive Stacey Cartwright, who initiated the transformation of the Knightsbridge store, would transition to the position of deputy chairman in January 2018, while Daniela Rinaldi, formerly group commercial director, and Manju Malhotra, formerly group finance director, would assume the roles of co-chief operating officers, in place of a CEO. However, Cartwright resigned just three months into her new role, exiting the company a month later. There are no plans to name a successor.

Now, the retailer hopes to lure shoppers with a new womenswear floor in the Knightsbridge store, opening today. 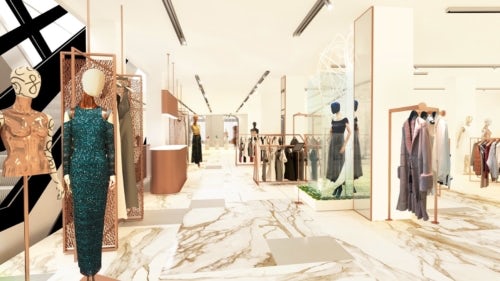 The 22,000 square foot space is designed to feel more like a luxury boutique than a department store, said co-operating officers Rinaldi and Malhotra. Moving away from the traditional branded shop fits that used to occupy the space, the floor has been remodelled to give visibility from one end to the other, while windows have been unveiled to give the space natural daylight.

New to the floor is a dedicated lounge area, which will sit alongside a revamped shoe area and an indoor rotating exhibition space. It will also introduce The Restory, a new on-demand shoe and bag repair service, while an interactive digital screen will give shoppers access to a wider range of inventory via the Harvey Nichols website.

In addition to the designer womenswear space, which sits on the first floor, the fourth floor — which until now has been a “swing space” accommodating departments under renovation — will have a new look and feel. Over 50 new womenswear brands will be stocked across the two floors, including Calvin Klein 205W39NYC, Off-White, Chloé and Sies Marjan. The fourth floor will continue to house beauty services by Daniel Hersheson, Beyond Medispa and 111 Cryo.

“Sixty-five percent of our business is geared towards the domestic customer, and this is how she shops,” said Rinaldi. “It’s a really navigatable piece of space. We’re not asking people to move onto another floor to buy [from] the shoe offer that sits with the brands on this floor. It’s consistent when it comes to how we shop.”

The transformation of the Knightsbridge store began with its two menswear floors, which were reopened to the public in April 2016, followed by the ground floor renovation, which now houses the Harvey Nichols’ Beauty Lounge — a space offering a treatments from blow dries and manicures to vitamin infusions and LED facials — alongside beauty counters and the accessories and fine jewellery departments.

“We know as a business we probably under invested in our store estates for a few years,” said Malhotra. “I’ve been [at Harvey Nichols] for 30 odd years and we have never undertaken any structural work on this scale in the time I’ve been here,” added Rinaldi. In a fast changing retail landscape, increased competition both on and offline made standing out a lot harder today’s the crowded market. “If you take Harvey Nichols back to the late ’80s, early ’90s, there was very little competition,” Rinaldi continued. “[Today] we suddenly have competition from every angle, whether it was brick-and-mortar or pure players. It was just a question of how we were going to respond really.”

The store has already seen some benefits from the ground floor renovation project. Harvey Nichols is the sole brick-and-mortar stockist of Fenty Beauty in the UK, with Sephora being the only other global retail partner. “That ground floor was game changing for us,” said Rinaldi. “The Kendo team [the team behind the LVMH-owned beauty incubator that developed Fenty Beauty] loved the fact that it’s a very luxury environment but it’s very warm.”

While declining to give exact figures, she added that Fenty brought in the same amount of revenue in five weeks as MAC did in a year when Harvey Nichols’ launched it exclusively in Europe in 1993, and remains the department store’s most successful beauty launch to date. In December, the store reported that the new ground floor was “seeing strong sales growth with the beauty offer significantly out-performing the market rate of growth.”

However, some of Harvey Nichols’ competitors — which have also been heavily investing in modernising stores and shopper experiences amid the rise of e-commerce and shifting consumer spending habits away physical products towards experiences — have already seen the payoff reflected on the balance sheets.

Selfridges, which has also been renovating its flagship London store, reported record results for the year ending January 2017, with operating profits of £180 million ($236 million), up 18 percent from £152 million ($200 million) the previous year; sales reached £1.6 billion. Similarly, Harrods, whose flagship is located 5 minutes’ walk from Harvey Nichols and is currently investing about £200 million pounds ($266 million) in a bid to modernise the retailer, reported its eighth consecutive year of record sales and profits last October. 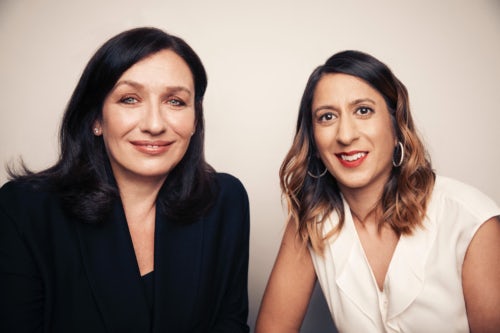 Despite profit drops, Rinaldi and Malhotra say they are confident that a continued focus on improving physical environments alongside a focus on digital technology will pay off in the long run. The store’s recent partnership with retail technology company Hero, which has allowed Harvey Nichols to connect consumers with their preferred in-store stylists, offering personalised online shopping options via instant messaging, photo sharing and live video streaming, is the latest example of the store’s efforts to leverage technology to help it stand out. It has also inked a partnership with Farfetch — due to launch at the end of this year — becoming the first department store to join the platform.

“We need to give people a reason to keep coming back and that’s part of the challenge really — they physical space vis a vis the digital world,” said Rinaldi, adding that they are currently working on renovation plans for regional stores and looking at adding to its international store network. “Our customer is very daring. She knows her mind. Our challenge actually is to give her or give him something they didn’t even know they wanted.”

Nevertheless, for department stores in particular, staying ahead of the retail curve is tougher than ever, say experts. “Store renovation is critical — [Harvey Nichols] cannot afford to be left behind,” said Richard Hyman, a UK-based retail industry veteran and consultant. “Having said that, this is without doubt the most unforgiving market we have ever seen... The ‘house of brands’ approach that Harvey Nichols operates is getting more challenging. Selfridges continues to execute this approach brilliantly, but others like House of Fraser, Fenwick and Harvey Nichols are all having to run much faster to stand still.”