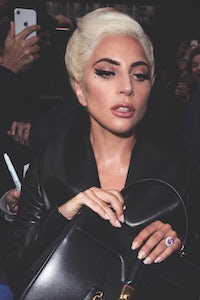 Images of Gaga at the Louvre Museum in Paris holding the black leather handbag were first spotted and posted to social media by fashion writer Pierre A. M'Pelé. Gaga's stylist Tom Eerebout confirmed to BoF that the new design was, in fact, by Slimane.

"He gifted her the bag and it's the first one from his new collection," said Eerebout, who has been part of Haus Of Gaga, the artist's creative team, since 2016. According to the stylist, the handbag will be presented as part of Slimane's first collection for Céline in September at Paris Fashion Week. 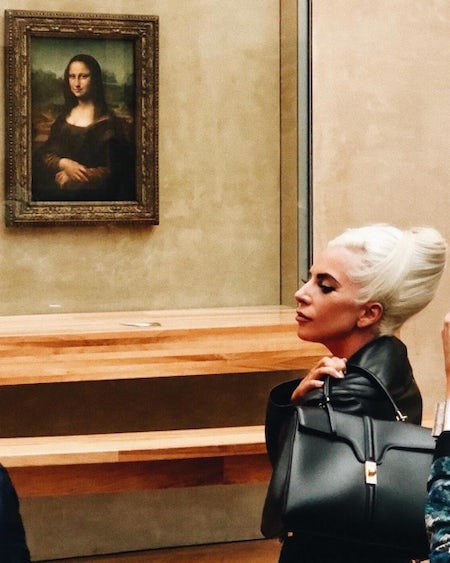 "Lady Gaga always supported Hedi at Saint Laurent," continued Eerebout, referring to Slimane's tenure at the Kering-owned house Yves Saint Laurent. "They're really close friends and they have been since he photographed her for 'The Fame Monster' album cover."

This is not the first time Gaga has been first to promote Slimane's designs. Back in 2012, she was the first celebrity to wear a full look from the Saint Laurent's Spring/Summer 2013 collection by the Los Angeles-based designer, just a week after the runway show. In 2016, she was again the first to wear a gold sequin mini dress with exaggerated puffball shoulders from Slimane's final couture collection for the brand.

The singer, referred to as "Mother Monster" by her fans, has amassed a large following of "Little Monsters" (a phrase which she has had tattooed on herself) and has over 29 million followers on Instagram alone.

LVMH has major commercial ambitions for Céline, which is nearing €1 billion in annual sales. Slimane is set to launch new product categories — including menswear, couture and fragrance — as well as a more robust digital strategy could help to double that figure.

At Saint Laurent, Slimane's creative directorship from 2012 to 2016 divided critics, but his LA youth culture-driven collections drove stellar financial results for Kering: in his first three years, the French brand more than doubled annual sales revenue to €707 million in 2014 (about $787 million), up from €353 million in 2011. But Slimane unexpectedly exited the house in April 2016.

According to Eerebout, Gaga has "a massive archive" of Slimane's work for Saint Laurent.

Lady Gaga has since posted two images of the handbag with visible Céline branding.