NEW YORK, United States — In the beauty world, influencers frolicking on white-sand beaches in The Maldives are a dime a dozen. Benefit Cosmetics went in a different direction for a recent campaign.

“I’m about to shake what ya mama gave ya,” Bretman Rock, a 21-year-old Philippines-born, Hawaii-based influencer, said into a bedazzled microphone while swinging on a stripper pole made to resemble Benefit’s “Precisely My Brow” eyebrow pencil.

The 45-second video is a riff on late-night infomercials and the brand’s most ambitious YouTube ad to date. The company paid to have a shorter version of the video displayed on YouTube’s homepage for a full day, and it’s accrued over 3.4 million views. Benefit also plastered Rock’s face on a display inside a Sephora in Oahu — a lifelong dream of the influencer.

Benefit used to whisk influencers to exotic locales like every other beauty brand. A 2016 party in Las Vegas featured no fewer than 90 social media celebrities. But in recent years, the company has opted for unconventional collaborations with more out there stars like Rock.

The strategy appears to be working. Benefit’s sales rose 3 percent in the first half of the year compared with the same period in 2018, according to NPD. Though the increase was modest, Benefit was alone among the 10 largest US prestige brands to avoid a decline, the research firm said. An individual close to the company estimates Benefit’s 2018 sales totalled $1.5 billion.

An oversaturation of brands and product coupled with consumers’ ongoing obsession with skincare has resulted in an overall category slump. All the influencer trips in the world aren’t helping lines like IT Cosmetics, Tarte, Urban Decay and Lancôme, which all showed year over year sales declines for the first half of this year.

We’re not in the top 10 in the eyeshadow business because we don’t really follow trends.

“I look at Instagram, and see someone on a trip and I’m like, 'Oh my God. I’m going to shoot myself in the head,' because I’m not spending my marketing budget to send someone to an island to take pictures,” said Bernadette Fitzpatrick, Benefit Cosmetics senior vice president of US marketing.

“I love the influencers,” she added with a laugh. “But at the same time I despise them because we’re reliant on them.”

Don’t try to be everything

While most cosmetics labels are rushing to enter every category – from lips to eyes to skincare to wellness – Benefit has mostly stuck to just three: brows, mascara and cheeks. 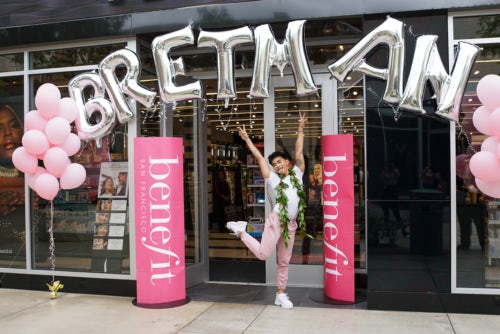 Bretman Rock outside of a Sephora | Source: Courtesy

Benefit invested heavily in eyebrows starting in 2016, both from a product and services perspective through its network of brow bars, and steered its marketing toward the category as well. Today, eyebrows make up about 40 percent of the brand’s sales and continues to take market share from Anastasia Beverly Hills.

The company does offer products outside its core categories, with limited selection (its foundation range has only 12 shades, even as some competitors enter the high double digits).

“They [the product team] stay in their lane, they do what we do really well,” said Alfred Stillman, Benefit Cosmetics’ general manager of the Americas. "We’re not in the top 10 in the eyeshadow business because we don’t really follow trends.”

Be prestige, but not too prestige

Benefit’s kitschy (often bordering on wacky) positioning may seem at odds with its relatively high price tag. But that combination has become one of its strongest marketing tools. Competitors in prestige tend to emphasise more conventional luxury, such as Tom Ford Beauty, Nars or Pat McGrath Labs.

The brand is luxe enough to appeal to older Millennials, while its fun side makes it a popular choice among younger consumers making their first foray into prestige beauty, said Lauren Goodsitt, a global beauty analyst at Mintel.

“They are welcoming to all ages, and when you go into a Benefit store or counter there’s not that snooty edge,” she said.

Say no to influencer trips

Benefit was among the first to take influencers on elaborate vacations, but is “getting smarter and more creative” about when and how it works with social media stars, Fitzpatrick said. That’s in part because travel content and hashtags have seen diminishing returns as more brands fly beauty bloggers to exotic locales.

"Why [pay for] a trip when everyone else is doing trips?” Fitzpatrick said.

Benefit’s marketing spend has increased by less than 10 percent year over year, and influencer spend has remained relatively flat since 2016. When the brand does fly influencers somewhere, it’s typically designed to “evoke an emotional experience,” she said.

“We’re smarter about what will make a trip or event stand out for the influencers, something they want to check off their bucket list,” Fitzpatrick said.

For the launch of the “Cheekleaders” palettes last spring, Benefit partnered with five influencers to visit their hometown high schools to present grants $10,000 grants to each school. Favourite teachers were given $5,000 to take a vacation.

Benefit often works with influencers who have smaller but more loyal followings, or who closely fit with a campaign’s goals.

"I hate to use the word ‘authentic’, but who actually believes that a big influencer is authentic anymore? Everyone knows who’s getting paid to do what,” she said. “I think a lot of brands just think, ‘Hey I’m launching this product who’s the hottest influencer now?’ That’s not what we do.”

Revlon is exploring its options. The struggling cosmetics company has tapped Goldman Sachs to decide on next steps, including a potential sale.

Botox rival has a strong launch. Evolus Inc, maker of Botox competitor Jeuveau, reported revenue of $2.3 million from early sales, which is ahead of expectations.

Selena Gomez will start a beauty brand. The actress and musician filed a trademark for a namesake line of products from fragrance and cosmetics to skincare and haircare.

The CBD industry is still unregulated. Ads are pitching CBD as a cure-all but some consumers are reporting unpleasant side effects.

Beauty brands rethinking their ties to Uline. The owners of the shipping supplies vendor are the second biggest Trump donors in the 2020 election cycle so far.

Olivia Jade gives the finger to the media. Lori Loughlin’s daughter took to Instagram to post a photo, calling out People and The Daily Mail for their less than flattering coverage.

Doctor brands are betting on their authority. Skincare labels founded by doctors are seeing a resurgence.