LONDON, United Kingdom — “What makes us all so special is not one of us is like the other,” reads a product description for the “magic” Bianca blouse on Australian brand Réalisation Par’s website. “This shirt has been sent to every one of our girlfriends: the tall ones, the tiny ones, the ones with boobs and the ones without and no matter who puts it on, it just works!” The label’s Ozzie dress, we learn, “will work harder for you than anyone else will,” while the 1996 dress promises to save you from social isolation: “When trying to find the right dress for one of those things, we usually get overwhelmed and end up buying something expensive we’ll never wear again... ultimately making us feel a little weird and leaving us standing by the bar pretending to write emails.”

Welcome to BFF marketing. Chatty, inclusive and intimate, this approach — predicated on the notion that a brand is your friend, thinks you’re special and is designing products especially for you — is the core narrative behind the rise of some of the most successful direct-to-consumer womenswear and beauty brands in the marketplace right now.

“The customer calls the shots. She’s in charge,” says Maggie Winter, chief executive and co-founder of sustainable, season-less brand AYR (“all year round”). AYR is 80 percent direct-to-consumer and uses gal-pal-style e-mail newsletters to drive e-commerce sales. “Your social media feed. Designed to make you feel good sometimes, bad other times. Unlike these jeans which are designed to make you feel amazing 24/7,” reads one newsletter from the summer. The strategy appears to be working: site traffic driven by e-mails is up 60 percent in the last year. “Just because the goal is to drive revenue, doesn’t mean that dialogue has to be impersonal and aggressive,” says Winter.

The approach is predicated on the notion that the brand is your friend, thinks you’re special and is designing products especially for you.

For sustainable direct-to-consumer brand Reformation, “hyper-growth” was also kick-started with a pithy newsletter in March 2013, says the company’s founder, Yael Aflalo. “We wrote about Coachella and the caption was: ‘It’s not that important but it kinda is.’ All my friends rung me to say how cute it was.” It wasn’t just cute; it was instantly profitable. Sales jumped from $18,000 in February (pre-newsletter) to $175,000 in March. Millennial-friendly Instagram captions and product descriptions (Aflalo describes the tone as a SoCal-esque “urgh, but yeah”) are part of Reformation’s USP. “Being naked is the #1 most sustainable option. We’re #2”, puns their Instagram bio, where the brand has 818,00 followers.

“The shtick is: ‘we gotchu girl’”, says Lucie Green, chief global futurist at marketing communications agency, J.Walter Thompson. “This inclusive, Lena Dunham-type dialogue taps into fourth wave feminism, where the direct-to-consumer brands are often symbiotically linked to having a female founder. The story of the brand becomes a case of female empowerment and you’re encouraged to support them not just as a consumer, but as a supporter of their story.” At Goop, Gwyneth Paltrow has “baked herself into the product”, while Reese Witherspoon places herself squarely at the centre of her brand, Draper James, inhabiting the role of the ultimate Southern belle.

The French brand Rouje, created by Jeanne Damas, a Parisian equivalent to Alexa Chung, has adopted a formula that co-founder and investor, as well as Damas’s manager Jérôme Gautier decribes as “enthusiastic Instagram caption, plus Jeanne herself.” It’s a potent strategy: dresses typically sell out within two hours and the brand has seen triple-digit growth, from season to season, according to the company. A community hashtag — practically de rigueur in the direct-to-consumer womenswear marketplace — can also pay dividends, encouraging consumers to become part of a label (and subsequently provide some free online marketing in the process). Rouje’s is #lesfillesenrouje, Reformation’s is #refbabes, Ganni has #gannigirls, while British silks brand Rixo opts for the less gendered #humansofrixo.“These brands have invested in the creation of an aesthetic, club or lifestyle that renders the product almost irrelevant,” says Leandra Medine, founder of Man Repeller. “You want nothing more than to be a girl who belongs to one of these brands.” 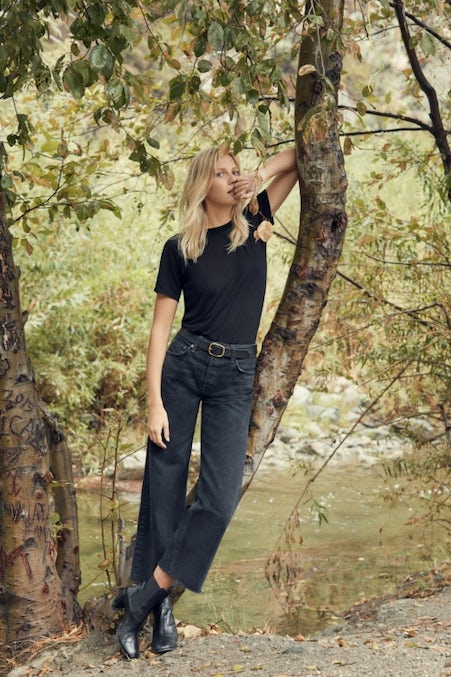 Creating a club and allowing those club members to influence your product is a vital part of BFF marketing, says Amy Lee, strategy director at brand consultancy Wolff Olins. “Consumers, particularly the younger Gen-Zers, are un-brand loyal and sophisticated about their optionality online.” Direct-to-consumer brands must be nimble, and keep their ears wide open, if they want to catch them.

“Being a community leader is the only thing that’s allowed me to be a CEO,” says Emily Weiss, founder of beauty brand Glossier. “I religiously read the comments on [her beauty website] Into The Gloss and it was always clear to me that the brand had to be friendlier, more approachable and more in tune with the customer than existing beauty brands,” explains Weiss. The Milky Jelly Cleanser, one of Glossier’s best-selling products, was launched after asking Into The Gloss readers to “describe the face wash of their dreams.” The response to this quippy, reciprocal dialogue was “immediate,” says Weiss. “Glossier had over 10,000 Instagram followers before we even released a product.” The brand grew 600 percent from 2015 to 2016.

For Aflalo, having a community has enabled the company to develop products in conversation with consumers via the instant feedback loop of social media, a key element of success. The Wedding collection, launched in response to “people asking us to make 12 matching dresses”, now accounts for 18 percent of Reformation’s business. Most recently, the brand relaunched Reformation Jeans, priced at half the price of the mainline collection, after repeated entreaties from their #refbabes to make the brand more affordable. Reformation has organically grown its revenue at an over 60 percent compound annual growth rate (CAGR) since 2014.

Two years ago, luxury e-tailer Net-a-Porter inserted themselves into the direct-to-consumer boon by working on exclusive collaborations with brands such as Ganni (now widely wholesaled), Reformation, Staud and Glossier. Net-a-Porter fashion director, Lisa Aiken, describes the collaborations as “immediate success stories. We launched Reformation’s first ever capsule for Resort 2017, and sold out of two styles within an hour of them going live. Similarly, when Staud launched a High Summer 2017 capsule with us, the ‘Moreau’ bag sold out within a day.”

But BFF marketing is certainly not fool-proof. You have to have more than a “cutesy tone of voice and a good colour palette” to build and scale a brand, says Lee. Nasty Gal went sideways when “the negative headlines about the business made the story of founder, Sophia Amoruso — who created a marketing strategy around herself as a young successful ‘girl boss’ who young women identified with and aspired towards — seem like a bit of a fallacy,” explains Green. Reformation (which Aflalo describes as “masspirational”) and Goop have scaled effectively, because they haven’t lost their messaging. Says Green, “You just have to be specific about knowing your girl and ensure that goes across all brand activations.”