LONDON, United Kingdom — Burberry will unveil its first ever “see now, buy now” show at London Fashion Week today, heralding a new era for the industry in which fans can get their hands on "seasonless" items immediately after they are presented on the runway.

But the new approach has significant implications for production and supply chains, which were out of sync with communications and marketing departments, and all eyes remain on the brand to see how it has executed the changes needed to adapt towards a fashion immediacy model.

When the company announced its new consumer-facing concept in February, it was held up as a solution to long-standing problems with the traditional fashion calendar. Fashion shows had long been strictly industry events for press and buyers to preview collections. But the rise of digital media has shed transparency on the model, with runway shows morphing into powerful consumer marketing events, leaving brands ill-equipped to convert social media buzz into sales for collections that have yet to be produced.

“The changes we are making will allow us to build a closer connection between the experience that we create with our runway shows and the moment when people can physically explore the collections for themselves,” said Burberry chief creative officer and chief executive officer Christopher Bailey in a statement.

“Burberry is … a perfect example of how our fashion industry has pioneered new ways to engage with customers,” British Fashion Council chairman Natalie Massenet said in her address at a reception for the British fashion industry hosted by Prime Minister Theresa May at 10 Downing Street on Thursday evening.

“We should all be proud that it was one of the first fashion brands in the world to embrace digital and social media and integrate them seamlessly into their operations, to merge their menswear and womenswear shows and adopt the revolutionary 'see now, buy now' model. We saw only last week in New York the huge influence that this innovative thinking has had.”

Neil Saunders, managing director at retail research agency and consultancy firm Conlumino believes that the shift is "in step with the times and the way people shop," but admits there is a risk in shattering a traditional model that has worked for many years.

If any brand can make it work though, it is Burberry. "They have got great social media presence and I think they are very savvy with connecting with their customers. So I think for them, its probably going to be a win," Saunders says. "I would say with some other brands, there is more of a risk there. I don't think they have put in that groundwork, really connecting with customers in the same that perhaps Burberry has done."

Traditionally, fashion brands start designing a collection six months before a show debuts. Burberry says it has moved its internal processes ahead by several months — including design, development and production — to accommodate the new format in which collections will be 'seasonless' and shows will be described simply as 'September' and 'February'.

Burberry would previously have started designing the Spring/Summer 2017 collection in May, which would then show on the runway in September. But this year, the design team started work in January, preparing for a September show in which we will see ready-to-buy womenswear and menswear.

As the collection was being designed, Burberry communicated production deadlines and lead times with its supply chain partners.

“You normally design the full show, then you show the show, and then your supply chain starts to kick in,” Bailey told BoF when he announced the change. “Now, we will be designing the show and, as we’re doing that, we will be passing things over immediately to our supply chain partners to say, 'Let’s look at the lead times on this; how can we work with this factory to get this on the date that we need it?'”

Next, the operational process moves onto sampling — creating a sample of each design to present to buyers and the fashion press.

Previously, the samples would have made their debut at the runway show, but the new process sees them made around three months ahead of the show, in order that they can be shot for the label’s advertising campaigns and buyers and press can plan which items they will sell and feature in long-lead print publications.

Over 250 items of clothing and accessories were created for the September collection, a combined number of 83 men’s and women’s looks. 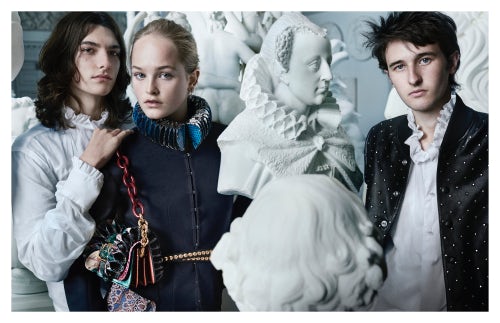 In order to have an advertising campaign ready in time for long lead magazines and a release schedule beginning in August, samples were photographed for a campaign shoot in June or July and worn by models Jean Campbell, Cavan McCarthy and Alex Dragulele. In a statement, Bailey said that the campaign was inspired by author Virginia Woolf’s novel Orlando and the works of interior designer Nancy Lancaster.

Previously, buyers and press waited until the big reveal of a runway show to see the new collection, then visited a showroom afterwards to place their orders and request samples for photo shoots.

This time, Burberry created a restricted showroom at its headquarters in London for key international wholesale buyers and press to view the collection in July. The top looks from the collection were styled on mannequins, which were displayed on a rotating carousel. Accessories were also displayed, as well as inspiration boards with images, photographs and swatches of fabric to give the clearest possible sense of the collection’s themes. Previews were carried out in the strictest confidence, following the signing of a non-disclosure agreement. Any imagery distributed by Burberry was watermarked with individuals’ names to ensure no early leaks of the collection, according to an industry source.

Once wholesale buyers have placed orders, Burberry’s production teams work to fulfil orders for department stores and other retailers as well as its own flagship stores and e-commerce site. Burberry declined to disclose when it went into production due to the commercially sensitive nature of the information. The orders will be shipped to locations around the world so that they can be ready in stores and distribution warehouses immediately after the show.

Burberry has already released videos and campaign images teasing details ahead of the show and the new collection on social media networks including Facebook, Twitter and Instagram.

The full campaign will officially be launched on Monday after the show, to coincide with the collection’s immediate availability for purchase. The advertising imagery will also appear in upcoming issues of the world’s leading glossy magazines.

Burberry will unveil its September collection on Monday at a new venue, Makers House, in the heart of London’s Soho. The company announced in a statement that it would be broadcasting its show via Facebook Live, so that fans can watch the runway show live in their feed. There will also be live customer service on Facebook Messenger for those who wish to buy the collection. Additionally, there are partnerships with Snapchat, WeChat and Kakao.

The new collection will be available for purchase immediately after the show ends from the company’s flagship stores, on its website, and at select wholesale partners including Barneys New York, Colette and Hong Kong-based travel retailer DFS Group.

After the show, Makers House will be open to visitors from September 21-27, where the new runway collection can be seen in its entirety. It will run a daily programme of activities and installations at the venue, and will feature the works of a selection of makers who will use the space to experiment and create new products, using the collection as inspiration. The design process for February’s show will begin immediately after.

Editor’s Note: This article was revised on 19 September, 2016. Due to an editing error, an earlier version of this article misstated Lane Crawford would sell Burberry's ready-to-wear collection. This is incorrect.