Thirty years into her career, the supermodel speaks exclusively to BoF's Tim Blanks about her journey from shy teen to industry icon as she prepares to release a new retrospective book, footwear collaboration and beauty line. 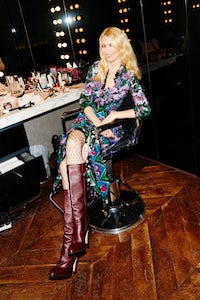 Thirty years into her career, the supermodel speaks exclusively to BoF's Tim Blanks about her journey from shy teen to industry icon as she prepares to release a new retrospective book, footwear collaboration and beauty line.

LONDON, United Kingdom — On some random night 30 years ago, Claudia Schiffer was a pathologically shy teenager living in the suburbs of Dusseldorf with a stressful social obligation on her hands. The Schiffers had visitors in town from Hamburg, and entertainment was called for. The local pub wasn’t going to cut it, so the decision was made to head into the city to a nightclub. Claudia had never been to such a place before — partly the lack of transport, mostly the shyness — but the destination of Schiffer & Co. that night could only be Checkers, the most upmarket niterie in town. So, on with the blue eyeshadow and blush and off to Checkers. And there, while she was dancing to Pet Shop Boys — or maybe it was Howard Jones — she met destiny, in the form of a model scout who wasn’t even supposed to be in the club that night.

“And that was the rest of my career,” Schiffer says now. “So many accidents, so many things that could have gone so seriously wrong. And nothing bad ever happened. Only two things, and they weren’t even that bad. I was in Revlon’s private plane hopping from town to town and a duck flew into the engine and we had to do an emergency landing. And another time, I was in a small plane and the door opened on my side, and I put the belt in the handlebar and I was sitting there holding it.” 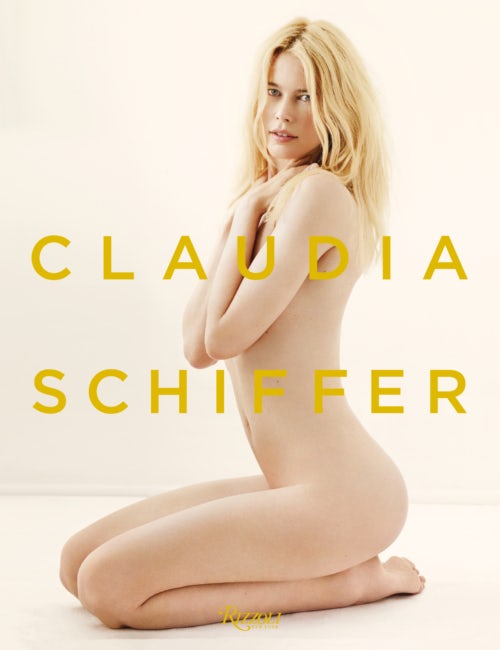 And that’s it. Otherwise, she weathered the eye of the supermodel hurricane with drink and drugs and rock’n’roll raging all around her. “It never came close to me,” says Schiffer. “I didn’t like the taste of alcohol, it was bitter to me. Peach juice was much better. I had my first taste — a glass of red wine — in my late 20s and I thought. ‘This tastes good’. If you think of all of these things in this crazy world, how was it even possible for 30 years? There must be someone up there on another planet and they were put on this earth and it’s like ‘I’m going to look after this one’. And I totally believe that.”

And from that statement, we pluck a couple of items of significance. Claudia Schiffer has been a model for 30 years. And she believes in guardian angels. The two go together. She calls modelling her saviour. Without it, she says, “I’d probably still be a very shy person who had no idea I could overcome that by experiencing many things. I would probably be in a job where you can be in the background, in a bank, or behind the scenes. Modelling was my therapy. I learned how to communicate, how to be with people, and of course, having success within something.”

The career is commemorated in a new book from Rizzoli. “They said, ‘Its very simple, choose your favourite pictures’,” says Schiffer. “It was difficult because there were so many. I had so many Pinterest boards. But it wasn’t just picking my favourite photos, it was also the ones I consider within the profession as perfect. Everyone on a shoot — photographer, model, hair, makeup, stylist — is exhibiting what they can do, because they’re being judged every time by the photo story. The pictures I chose are also pictures of all the amazing people outside the frame of the image, everyone who was part of the best stories.”

You can call that a sense of mission if you like. Schiffer loves fashion and modelling, and she’s keen to present both in the best possible light. But she does that with an intense Germanic pragmatism. “A lot of models nowadays have come to me and said, ‘This business is so tough I can’t cope’,” she says. “Yes, it’s a tough, tough business if you’re sensitive. You have to have super thick skin. You walk into the studio and people are talking behind your back and you can hear because they’re not even trying to be polite, because they don’t give a shit if you can hear them, and they're pointing out everything that’s wrong with you. And then you’re booked and you’re cancelled and your friend gets the job. But for some reason, I’ve always had this weird arrogance that I’ll be fine, I’ll get something else. There’s only the competitiveness. 'She got that, how can I get it next time? How can I beat everyone?' That was all the '90s girls. When we saw each other, it was all let’s party and be friends but behind the scenes, it was ‘How can I book that?’ Which in retrospect was great because we were all successful.” 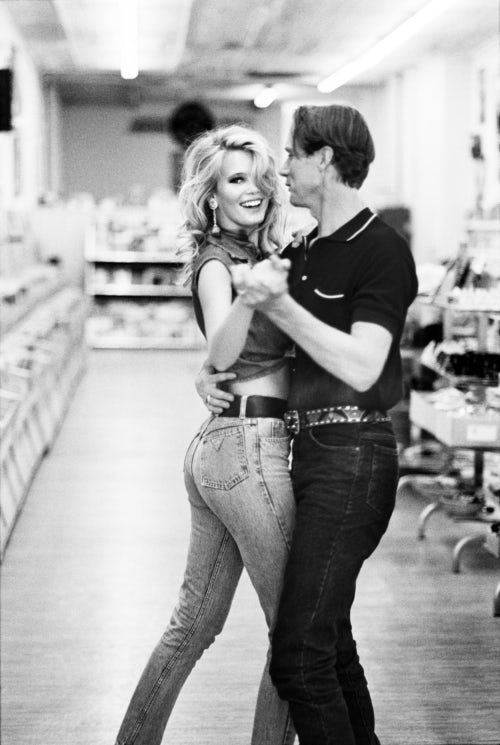 But that was the '90s, a remarkable moment in fashion which was created by a confluence of beauty, vision and money. “I wouldn’t say it was a better time but it was very different from what it is today,” Schiffer muses. “Today you can see exactly what a picture is, but back then, there was no digital, everything was through Polaroids. So everyone had to work extra hard, because no one knew for sure if they actually had the shot. We’d work much harder for longer hours, but we had much more time and bigger budgets. A shoot could be one week, two weeks. Now, it’s a day. Everything is faster, shorter and more like a business. Then, the emphasis was on the outcome, the creativity of it all. It was all about fashion. No one was coming in from the acting world or music, there weren’t even 'It' girls. The models, the photographers, the designers… they were the rock stars. And there were shows then. You could probably could have asked people to pay money and they would have.”

She’s too sensible for rose-tinted glasses but you can’t miss the note of rue in Schiffer’s voice when she talks about the easy access of the industry today, even as she recognises the uniquely contemporary challenges of the digital era. “Anyone can do it today, but there is so much competition that you have to be more than just a model. Actress, singer, social activist… you have to be heard, to be noticed to have a longevity in this business.”

Longevity. The notion would have been laughable when Schiffer started modelling at the age of 17 in 1987. “I never had an expectation of a long life as a model,” she says. “I always thought — and by the way, you were told this — that 30 was the cutoff point. Afterwards, you were told 40, but then it’s definitely over. But now I’m well over 40, and so are the other girls. It’s nothing to do with your physique. It’s to do with if you’ve made a name for yourself. If you’re famous, you’ve made it to a certain point, and you’re able to work longer.”

So it would seem that fame inoculates against the crazy pace of modern consumerism, because Schiffer is fronting a whole host of product ranges, as well as executive-producing her husband Matthew Vaughan’s new Kingsman sequel. (Watch the movie and see if you notice anything… familiar… about the BeautyBot character.) She insists it’s entirely coincidental they all seem to be coming out at once. Finding the right partners took time. “Every collaboration I do is an extension of what I know,” she explains. “I’ve been in training for 30 years, I know quality because I’ve worked with the best. And because I love fashion, I didn’t want to do anything else but fashion. That’s my world. So I had to look for partnerships where you speak the same language.”

Makeup with Art Deco? “The company was established in Germany in the late '80s. It’s the makeup I wore when I was a teenager. Blue eyeshadow, loads of blush.” It was, in fact, the makeup Schiffer was wearing when she was scouted in Checkers. How’s that for circularity? And, as a tribute to that time, her range for Art Deco includes a denim palette of four blues, three more than existed back then.

Shoes with Aquazzura? Schiffer is wearing peep-toe heels when we meet, but they have a conspicuous number of buckles, and as she tells it, they’re not simply decorative. “One thing I’m famous for is I never liked walking the runway unless I was comfortable in my shoes. There’s nothing I like less than when a shoe looks beautiful but isn’t well-made. Show shoes, in other words. As a woman, you want your foot to be held so you’re not falling down. I like the idea of shoes that are hugging.” Working up to the challenge, Schiffer sent designer Edgardo Osorio a crazy mood board of memory — running through the Marais dressed in black, inspired by Carine Roitfeld; floating like a bird in amazing heels, choreographed for a shoot by Richard Avedon. 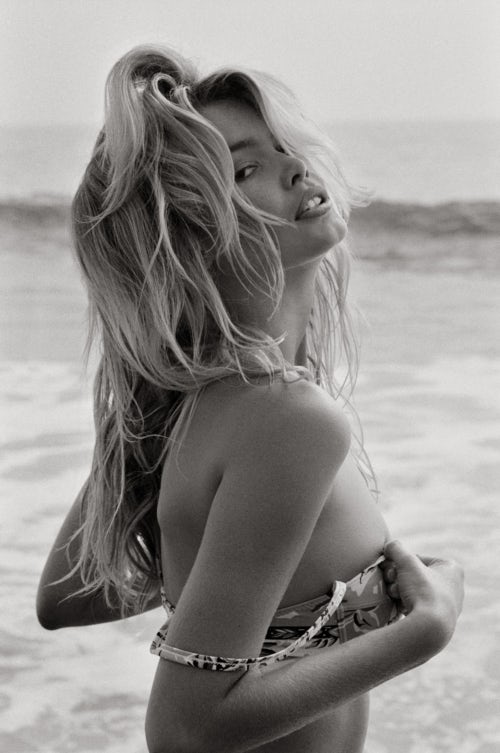 It’s a reminder to anyone who gets close that there’s a serious weight of association attached to Schiffer. When she shoots now, she knows what works. “Over 30 years, I’ve trained my eye, I know a good photo and a good photographer. I can see the picture and say, ‘We don’t have it yet.’ I just worked with a new photographer, Agata, for Harpers Bazaar Russia and she was amazing, and after five or six shots, I knew she had it. But she was feeling insecure. I was almost like the model and the editor.”

The feeling didn’t come naturally. She wasn’t the girl boys wanted to date and other girls wanted to be friends with. “There was one girl who went to modelling school who was just like that, and she never became a model,” she recalls. “So I don’t think it’s something you can learn. For one thing, you’re a freak of nature. For another, you’ve either got it or not.” It’s that guardian angel situation again. It makes me wonder how she’d feel about her own kids wanting to model. “If my kids were really serious about modelling, I’d be watching over them. You can protect them much better than an agent, who did not protect me. So if you can, have your mum protect you, although it sounds terrible because a stage mum is not great. But I’m thinking protective like a lawyer. I was sent to all these different countries on my own which were not safe, but back then the agent was the booker, they just booked the job, booked you a plane, it was about getting the job done. Now those people are managers and a manager is much more than a booker.”

There’s something else I’m curious about. What does Schiffer herself, with her supermodel status, think she stands for? Her response is just as pragmatic as you’d expect. “People don’t really know much about me from the pictures in the '90s because of who I was, the shy girl who never revealed much about herself. I’m the same today.” Fact is, she imprinted herself on global consciousness with a string of particularly lubricious Guess Jeans ads. Hair and clothes and the probing lens of photographer Ellen Von Unwerth coaxed her into her baby Brigitte Bardot persona, the look that launched her career. “It’s just not in my nature,” Schiffer reflects, now that retrospection is the order of the day because of the Rizzoli book. “I thought it hilarious they would call me a supermodel. I was trying to play Superman but I was really Clark Kent. It’s not really me, it’s the work I do.”