How Hearst Makes It Work

One year into his role as president of Hearst Magazines, Troy Young tells BoF about how he’s trying to keep the print publisher 'solidly profitable' despite the challenges of running a media business today.

How Hearst Makes It Work

One year into his role as president of Hearst Magazines, Troy Young tells BoF about how he’s trying to keep the print publisher 'solidly profitable' despite the challenges of running a media business today.

NEW YORK, United States — Troy Young may be the most optimistic man in media.

The Hearst executive, who was promoted one year ago to the role of president of the global magazine division, is tasked with finding a substitute for print advertising revenue, which has declined relentlessly over the last decade.

But Young is accustomed to seeing value in magazines beyond the printed page. As the former head of Hearst Magazine’s digital media team, he pushed the company to figure out how to make content and money online faster than many of its peers. Now he is trying to future-proof the whole division, one part of the Hearst family’s $11.4 billion media and information services business empire. Cosmopolitan, Esquire and Women’s Health are among the titles under his watch.

“The modern incarnation of a magazine company is hard to communicate,” said Young in an exclusive interview with BoF. “Clearly we are going through change, but it’s a golden age because it’s an age of reinvention.” 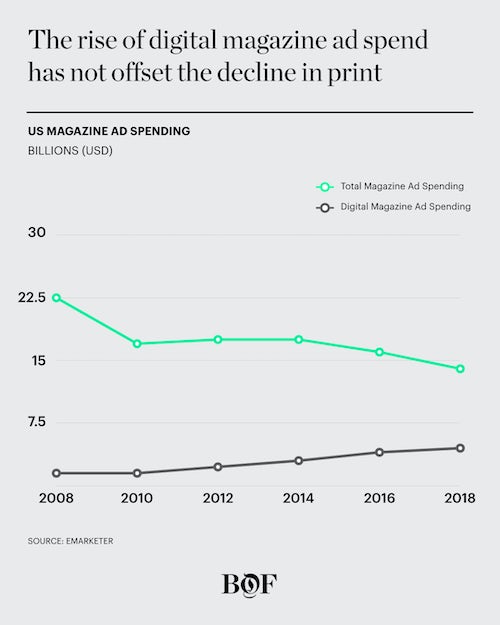 The two biggest print publishers in fashion media are both looking for the magic formula that will replace print advertising, which declined from $20.74 billion to $8.97 billion since 2008, according to eMarketer. Both publishers are developing new revenue streams, whether it’s online paywalls, conferences and events, membership programmes, e-commerce or — most lucrative so far — original video content.

But the similarities largely end there: Condé Nast is in the midst of an at times tense global restructuring that has involved selling off titles, but also minting new editorial stars at titles like Bon Appétit and GQ.

Meanwhile, Hearst’s transformation under Young has generated fewer headlines, good or bad. Young points to Hearst Originals, its television and video programming division, a new subscription exercise video app and a business-to-business data software as a few of several areas of innovation. But these projects have yet to prove they can make up for the decline in print advertising.

Young isn’t looking for quick wins. Rather, he’s putting pieces in place that he hopes will pay off down the line, assuming his vision for the future of the media business comes to pass. It’s an optimistic outlook: He predicts consumers will become more willing to pay for online content, publishers will come to better ad revenue-sharing deals with Facebook and Google, and a technology backlash will spark a print revival.

Hearst can afford to be patient — to a point. Its magazine division is “solidly profitable,” Young said, though the margins have shrunk in recent years. The parent company, which also owns newspapers, television stations and the credit rating agency Fitch Ratings, among other assets, saw revenue grow 4 percent last year and reported record profits, according to President and Chief Executive Officer Steven Swartz. Print advertising still represented the majority of Hearst Magazines' revenue and two-thirds of the division’s profits at the beginning of 2018.

“I think we’re in the middle of it,” Young said. “We can't look at this business in month or even year increments. That's the great luxury of Hearst — we have to look at it over a longer span of time."

The same slow-and-steady approach applies to its print products. Hearst’s publications, from Cosmopolitan to Elle to Women’s Health, are largely stable, if lacking the star power brought by Vogue’s Anna Wintour or the accolades won by The New Yorker’s investigations. Hearst Magazines hasn’t shut down or sold a title in at least ten years.

Young said each title has its own strategy to drum up new revenue. Cosmopolitan, Hearst’s largest women’s title, is an advertising juggernaut and will better support large-scale events. The fashion titles like Elle and Harper’s Bazaar generate a trove of reader data Hearst plans to analyse along with social media activity, search terms and other information through a new software product it's calling Pattern and Shape. Young says brands will be able to pay to receive answers to questions about how customers interact with ads and content.

The data-first approach is one reason Young has installed leaders with digital experience at the top of the mastheads of most of Hearst’s major titles, including Cosmopolitan, Esquire, Popular Mechanics, Men’s Health and Women’s Health.

Young said the “cult of the editor” — celebrities in their own right who put their individual stamp on their magazines and have the kind of clout to woo advertisers and cover stars — is outdated. Former Chief Content Officer Joanna Coles, who led Cosmopolitan and Marie Claire before that, is a journalist who during her tenure at Hearst starred and developed television shows about life in magazines. Her replacement after she exited last year, Kate Lewis, was Young’s right-hand in Hearst’s digital division and comes from more of an operational background.

“I think the editor is still vitally important in steering a brand,” said Young. “But it’s a time of more collaboration and new skills in understanding what the audiences are reacting to.”

Elle’s Nina Garcia (a household name thanks to Project Runway) and Harper’s Bazaar’s Glenda Bailey (beloved by advertisers and the Hearst family) are two of the highest-profile editorial holdovers from the pre-Young days. 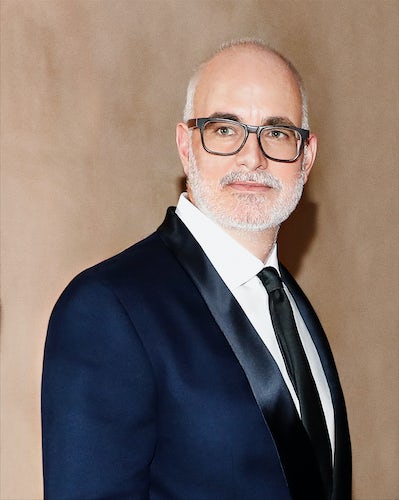 Young said print has a long future but needs to adapt to changing times. For instance, Hearst has developed custom magazines for brands, including the dating app Bumble and, coming later this year, outdoor gear retailer REI.

“There is something magical about a printed publication,” Young said. “I think obviously you have to match your investment to the demand on the ad side and on the consumer side. I think you'll see magazines change frequency and rate base, but I think they’ll be around for a long time.”

Young’s thoughts on print investments bring up another headline-generating incident from the last year: two writers at Esquire worked on a long investigation into alleged sexual assault and misconduct by Hollywood director Bryan Singer, but Hearst decided to pass on the story which was later published by The Atlantic. The behind-the-scenes media drama was detailed in a Columbia Journalism Review story in February, leaving many inside and outside of Hearst wondering if the publisher was no longer interested in pursuing ambitious, culture-changing journalism.

“That particular piece of reporting didn't adhere to our long developed and established set of editorial standards,” said Young, adding when asked that concerns about litigation were not a factor in the decision. “And it has nothing to do with anything other than that … There is a long history of ambitious journalism in Esquire and we want to keep doing it.”

As examples, he cited an Esquire piece on the relationship between Supreme and The Carlyle Group, pegged to information covered in political comedian Hasan Minhaj’s Netflix show; a first interview with the “kayak killer” at Elle; and a Marie Claire profile of a successful, unnamed doctor who became addicted to opioids, among several other articles across titles.

Meanwhile, video is driving about half of the growth for Hearst on the all-important digital advertising side of its business.

Young is focused on creating “brands that people recognise” through video, and getting better as casting on-screen faces from within the organisation. “Learning how to identify talent that people can relate to in front of the camera is a new learning for us.”

In February, Hearst acquired YouTube video news publisher Clevver and its 15 million subscribers as a way to quickly beef up its video production capabilities in Los Angeles as well as its know-how on YouTube, the most powerful video platform of the moment for publishers.

Young also has more acquisitions in mind. “I think it's harder and harder for small and medium-sized publishers to make a decent return,” he said. “So like we did with Rodale [the publisher Hearst acquired in 2018], there are opportunities to buy media brands and essentially put them on our printing press.”

He said he’s looking for data businesses to sort through trends, especially visual ones, as well as media brands that have strong consumer relationships.

“As long as you play an important role in someone's media habits… that structure will pay off.”