TOKYO, Japan — When Ryo Kashiwazaki created his first handmade leather sneaker, little did he know it would become a hit amongst streetwear cognoscenti and hip-hop stars alike. The idea was deceptively simple: take iconic sneaker styles — like Adidas’ Superstars and Nike's Air Jordan IVs — and reconstruct them entirely by hand in premium leather, using the kind of artisanal manufacturing processes typically reserved for high-end formal footwear. The legality of the approach was uncertain and the sneakers were expensive, retailing for over $1000 a pair. But the concept caught on like wildfire, first in Japan and then internationally. Every hype-beast who bought a pair acquired bragging rights over those who picked up a regular pair of Nikes.

Now, seven years later, the under-the-radar designer is about to expand his audience with a highly unusual partnership with Adidas Originals that turns the traditional sneaker collaboration model on its head. The first iteration of the tie-up (there will be others) is limited to three styles from the Adidas catalogue — a MicroPacer stripped of its pedometer; an NMD reimagined with its “Boost” midsole removed; and a Superstar — all rendered in Hender Scheme’s signature pastel tones. But critically, Hender Scheme is producing the sneakers and not Adidas. Indeed, each of the collaboration’s 900 pairs are being made by hand in the same ateliers as Hender Scheme’s core offering, using the same leather. The sneakers will bear Adidas branding, but otherwise will look unmistakably Hender Scheme. Models from the collaboration will hit carefully selected stores worldwide on September 2 and retail for between $900 and $1000. 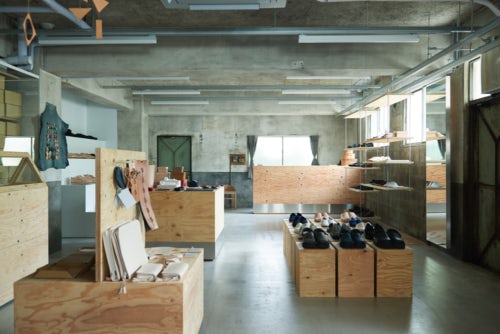 “We are making these shoes our way, so we can only make so many,” says Kashiwazaki. “But we also love sneakers, and what Adidas does in a different way, like manual versus industrial products. So maybe we can find a way in the future where these methods can work together.”

Despite its success, everything about Hender Scheme is unassuming, from the presentation of its products that sit on unfinished plywood displays to its bare-bones store on the outskirts of Ebisu to its modest design studio in Asakusa, Tokyo’s unglamorous garment district. When you meet Kashiwazaki, you understand why. Soft-spoken and contemplative, the 31-year-old former psychology student is refreshingly self-effacing in a fashion industry laced with ego. For him, everything Hender Scheme does is about the product, the artisans who make it and the consumer who buys it.

While Kashiwazaki had plenty of opportunities to exercise his mind at university, he also longed to do something with his hands and so, at 19, he joined a shoe factory, sculpting footwear lasts and making soles. He then spent four years apprenticing at a cobbler. It was there that Kashiwazaki not only learned the craft of shoe-making inside out, but also the value of artisanal labour. He nursed that knowledge and wondered how it could be presented to a wider audience. After all, artisans usually work behind the scenes, often overshadowed by designers. And that’s when it occurred to him that starting with a familiar archetype would remove the focus on design and place the emphasis on craft. What could be more familiar than an iconic sneaker style? In order to reflect the spirit of the collection, Kashiwazaki named it “Hommage.”

In addition to sneakers, Hender Scheme makes footwear, bags and household goods, all out of leather and all in the same artisanal spirit. “My hope is that the customers and stores also notice our main collection,” says Kashiwazaki. “The ‘Hommage’ project is an important one, but it’s only a part of what we do.”

Kashiwazaki calls his work “Manual Industrial Products.” Many of his products are made from tanned leather in its natural colour. The variations in colour tones that bring detail to the original sneaker models come from using different animal hides. The designer says Hender Scheme creates a product that is unfinished until it acquires a unique patina from continuous wear. For Kashiwazaki, this means that the end customer becomes a part of the product cycle. It also helps to establish a personal connection between maker and wearer.

We have never seen the hype train go this fast.

But it is the artisan that remains at the center of Hender Scheme’s universe. All of Kashiwazaki’s products are made in different ateliers around Asakusa. Each one travels from one atelier to another — from the sole-maker to the cutter to the hand-stitcher to the stamper who stamps the Hender Scheme logo on the final product. This approach inherently limits the company's volumes, but for Kashiwazaki it’s the only way to work. “Even with the same design, how the shoes will finally look depends on the craftsman, because each one makes the same shoe in their own way, since each craftsman has a different mind,” says Kashiwazaki. Because of the slowness of the artisanal process, Hender Scheme produces only about a 100 pairs of each sneaker style per season.

At some point Hender Scheme was noticed by the sneakerheads at Adidas Japan. They began to visit Kashiwazaki’s studio to order his sneakers for themselves. Eventually, word reached Erman Aykurt, the senior design director at Adidas Originals. Instead of being turned off by Hender Scheme’s approach, Adidas decided to reward the brand with a collaboration. “In the sneaker industry what Ryo-san is doing is already well-known, and I was flattered that he included one of our styles into his little ‘Hall of Fame,’” says Aykurt at the Adidas Originals showroom in Paris this past June. “We think what Ryo-san does elevates our profile instead of denigrating it, the way a counterfeit product does. We love the idea of approaching sneakers from an artisanal perspective. It speaks to our ethos, because Adi Dassler also came from a cobbler background.”

“The idea here, as with all of our collaborations, is mutual respect,” Aykurt adds. “It is unbelievable how much knowledge in terms of craftsmanship Hender Scheme has to offer, so we are deferring to Ryo-san to produce the shoes. In turn, we hope that he gains a new level of exposure through this collaboration. We have never seen the hype train go this fast.”

But don’t expect Hender Scheme to turn the newfound attention into large-scale business expansion. “The nature of artisanal production has natural limitations,” says Kashiwazaki. “If we grow too fast, it’s not good for us, and it’s not good for the artisans. I want to keep going for a long time and grow slowly. Artisans are very old now in Japan, so we have to groom more young ones. We have to think in generational terms. It’s very important to keep going at our pace.”

Why Are Sportswear Giants Nike and Adidas Embracing Fashion?

For Japan’s Visvim, Old is the New New