LONDON, United Kingdom — Fabrizio Viti’s career began in the early 90s after he graduated from Istituto Marangoni’s fashion design course in Milan. He landed a studio job, where the work was “like The Devil Wears Prada, making photocopies until 6am, doing the same sketches hundreds of times, fetching coffee.” Before long, an opportunity to become Patrick Cox’s assistant saw Viti move to work for the designer in his factory in the South of Italy.

After 4 years at Patrick Cox, Viti made his first corporate move to Gucci, with Tom Ford as creative director, before heading to Prada as the luxury brand sought to expand into a conglomerate. There, he worked under design director Fabio Zambernardi on Helmut Lang, Fendi and Prada shoe collections until he was approached by Delphine Arnault to join the Louis Vuitton brand alongside Marc Jacobs in 2004.

Sixteen years later, Viti remains as Louis Vuitton’s shoe style director, working alongside Nicolas Ghesquière each season, while also designing his eponymous collection, which launched in 2016 and is stocked by the likes of Browns, Matches Fashion and Galeries Lafayette, as well as having its own stores, including a new London location that opened earlier this year. Now, he shares his career advice. 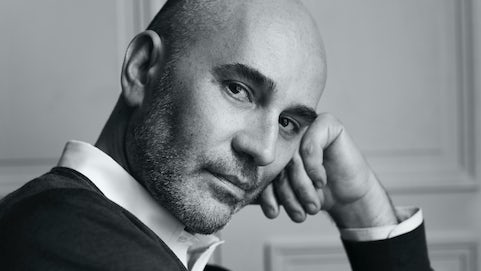 When I started in fashion, it was the 90s. I had previously studied sculpture before I moved to fashion design at Marangoni in Milan, and I discovered I had a passion for shoes and accessories. But being the early 90s, there was very little information available — there were no videos online about designers, or pictures of them and their work on Instagram. We were unprepared. When you leave school, you also have your own ideas and your little ego. But you have to listen first, and then talk. Listening means learning and understanding how to approach certain situations.

Eventually, after calling and calling studios for a job, somebody said yes, and I found myself in a studio with three women. It was like The Devil Wears Prada, making photocopies until 6am, doing the same sketches hundreds of times, fetching coffee. But it was good because I learned from ground zero, which I am still grateful for today.

What was an essential lesson from the start of your career that informs your work today?

In my first job, I was basically locked in a studio, where you can design, choose materials from colour cards — you can work on an idea. From sketch to sample, there are some steps which are very simple, but then, you have to understand how that idea becomes a reality.

You have to understand how an idea becomes a reality. I learned that from being in the factory.

I became an assistant for Patrick Cox for four years in his production factories in the south of Italy. I never went into the technical construction, but I know every step. You have to understand it to know what can and can’t be done, how patterned leather will react one way and satin reacts another way, to be aware of the materials and the time you need to fabricate shoes and threads. I learned that from the factory by being there, asking questions, walking around — seeing how the whole process works.

When I see young people stuck on the computer, I just think you should just go and see how you make it, because we're not printing the pages of a magazine or a book — we're creating objects that have to fit to the human body. I also think it's very fulfilling to see its creation and even now, after 20 years, I still enjoy going to the factory.

Do you have a particularly memorable mistake?

When I started at Gucci, working with Tom Ford, I think I was not prepared to be in such a corporate environment, and I did not value the politics of the job. I was probably not ready, in a sense, to take on that kind of responsibility.

But that is not to say it was a mistake. It was a process and an experience. I don't believe in mistakes in general, because I always think that when you do or say something at a certain time, it is because it seemed correct. You may regret it and think, I should have done it better, but it was what it was.

What have you learnt from working with other creatives?

I am blessed to have worked with some great people, starting with Tom Ford at Gucci, Fabio Zambernardi and Muiccia Prada, Marc Jacobs and Nicolas Ghesquière at Louis Vuitton. I have learned from all of them — Marc Jacobs’ sense of humour taught me how to bring joy to my work, while Mrs Prada’s intellectual approach taught me how you can see the same object in many different ways. From Nicolas, I learned to be faithful to my vision. All of these approaches are now in my own brand.

Fashion is very emotional, so your approach shouldn’t always be spontaneous. Not everyone has the same opinion and I have learned to look twice at an object. You have to respect the vision of the person who created it. When I collaborate now, I try to get out of the preconceptions I have and see things from the eyes of others. It is not easy, but you need to think, “What if I was that person?” Or, “Am I looking at this object with my experience and personal taste?”

What is the most challenging aspect of your work?

For me, the challenge is keeping up with the demands of the market and the needs of the people around me. Those needs mean you have to seem to be simple but be complex — and you have to be creative, but you have to sell. It is often about doing the same thing in a different way.

What if there was an electricity breakdown today? People are too dependent on digital devices to get to a certain point.

What advice would you offer those looking to launch their career now?

Creative independence is very important because you never know what could happen — look at us now [amid the coronavirus pandemic and global lockdown]. Have your pencil, your paper or whatever you use to design, and be willing to do it anywhere, anytime. What if there was an electricity breakdown today? People are too dependent on digital devices to get to a certain point.

For me, fashion is communication. I design to communicate. The main thing is that we are designing for other people — it is not an exercise on ourselves. The best compliment is to see the shoes in the street, or now on Instagram. I still get very emotional and love to see women wearing my shoes.

It’s also about the package — think about how the shoes sit in the store. My assistants around me, or at Vuitton, don't go to the stores. They design something and I ask, “But how do you see that fitting with the rest of the collection? Picture it on a shelf. Will it work?” You need to look at the wider picture, from the sketch to the store.

What is essential to be successful in fashion?

To be honest and grounded. It’s very simple. Be honest with yourself and, as much as you can, with other people. I have achieved what I wanted, which could seem a lot for some people — it could seem nothing to others — and I wouldn't say that I did everything right over my career, but it was probably right at the time because it was done with an honest heart.

We are currently in a situation where the world is falling down, but we probably need that because I believe we’ve been in a sort of limbo. The fashion system was a monster, [but] we created the fashion system and we need to remember we are working in a beautiful field. We are privileged and blessed to be here, but we have to change our attitude and I think honesty will become more important within that.