How Influential are the New Fashion Youth?

The concept was simple, even if the design work wasn’t: find a scruffy outsider style that remained untapped, then spruce it up for the luxury market. But today, as high fashion becomes increasingly accessible, this approach may no longer work. Today’s internet-empowered youth have the tools, access and information to create and promote their own fashion culture.

While some in the fashion media have been fixating on the growing importance of editorial coverage by young bloggers, relatively little has been said about a broader democratisation that’s happening in the fashion industry overall. For one thing, runway knock-offs — formerly a marginal industry — have become a borderline acceptable business practice, with stores such as Zara and Forever 21 building successful franchises by copycatting high fashion designs. In a sense, fast fashion collaborations such as Jimmy Choo for H&M or Rodarte for Target seem to legitimise this practice.

At the same time that affordable imitations of high fashion have emerged as a widespread, easy option for budget-conscious fashionistas, the once closed system that has long dominated high fashion has become increasingly transparent and accessible. The latest runway images are available online for anyone to see, while the behind-the-scenes machinations of the fashion industry have become fodder for popular movies and TV shows, from The September Issue and The Devil Wears Prada to The Rachel Zoe Project. Within this context, the power dynamic between high fashion and youth culture has changed dramatically.

A generation of young bloggers like Tavi and Charles Guislain form the vanguard of the emerging fashion youth demographic. Following in their digital footprints, websites such as Lookbook.nu allow young consumers to compare and share looks assembled from fauxthentic fashions sourced at Urban Outfitters, Topshop, Uniqlo, H&M and vintage stores. Further facilitating this fashion fluency, the ubiquity of street photography sites now allows for a remarkably rapid global exchange of trends: something pops up in a street shot by The Sartorialist one week and is seen in Moscow on Slickwalk a few days later. 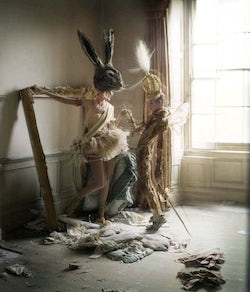 The 16-year-old Guislain reminisces that, “The first thing which attracted me to fashion was Hedi Slimane’s work for Dior Homme,” but rather than waiting for a casting director’s call, Guislain teamed up with influential fashion blogger and champion of new talent Diane Pernet to post videos on her website, A Shaded View on Fashion.

He may say, “I don’t see myself as a style influencer — I’ve always dressed firstly for me,” but his modesty is undercut by the fact that Ms. Pernet's videos of Charles are amongst the most-viewed content on her site and have already made him a budding style icon. Indeed, Mr. Guislain is featured in the latest issue of Italian Vogue alongside Stella Tennant, photographed by Tim Walker.

The looks showcased by Guislain and his contemporaries are certainly youthful, but they aren’t the byproduct of an isolated outsider culture blithely waiting for upmarket exploitation. In fact, with the easy accessibility and free flow of information that informs youth fashion today, that idea seems almost silly now.

In a relatively short time, young bloggers such as Tavi have gone from being outsiders submitting missives from the sidelines to challenging the dominance of major editorial outlets as arbiters of taste, with their front row presence denoting an important show and their opinions openly solicited. For an industry that has long thrived on hierarchy and insularity, this is a startling reversal of power, underscoring a shift that’s helping to drive a fundamental restructuring of an industry built on creating luxury through exclusivity.

Of course, none of this was possible before the internet. But today, young creative people, no matter where they are, have access to inspiration and powerful outlets to share their ideas. From articulate blogging stars to the young aspirants on Lookbook.nu, the new fashion youth are quickly sampling from the looks they see on the runways and creating mix-and match ensembles that are incredibly fashion fluent and often impressively innovative. Moreover, they are remarkably self-aware and savvy — seemingly immediately comfortable with and able to remix, communicate and capitalise on the high fashion aesthetics that have influenced them.

A month shy of her 14th birthday, Tavi has made videos for Rodarte, while Alie Suvelor was able to found the popular French magazine Dirrtyglam at the age of 18, attracting around a million hits each month. Indeed, the former outsiders are now the trendsetters and the idea of trying to repackage youth style without the participation of these young creatives seems woefully outdated.

Not all young fashion bloggers — even the ones getting the most attention today — will have staying power in the years to come. But the internet’s democratising effect certainly offers tremendous opportunity for exceptional young talent to break through and shape the new, digitally accessible fashion industry that’s emerging, while conversely making it less likely that anybody in the future will have as much consolidated influence as figures like Suzy Menkes or Anna Wintour do today.

Ken Miller is an editor, writer, and curator for print and digital media.