LONDON, United Kingdom — Walk into one of Saint Laurent’s 90 boutiques, spread across six continents, and similar rails of leather jackets, backpacks and clutch bags in varying colours and sizes dominate the veined marble-floors.

Gone are the days when Saint Laurent, or even Apple for that matter, marketed different products to worldwide markets. Now, certain luxury fashion brands are placing more focus on core, year-round product, immediately recognisable via a brand’s inimitable handwriting.

Of course, fashion houses and ready-to-wear designers have always had house classics — think of Chanel’s bouclé jacket, Mulberry’s Bayswater handbag or a glitzy Dolce & Gabbana cocktail dress. Such items keep customers coming back throughout their lifetime, which keeps retailers happy. But more often than not, these key pieces are overlooked by the press in favour of collections with ephemeral narratives shown at season-specific fashion weeks. 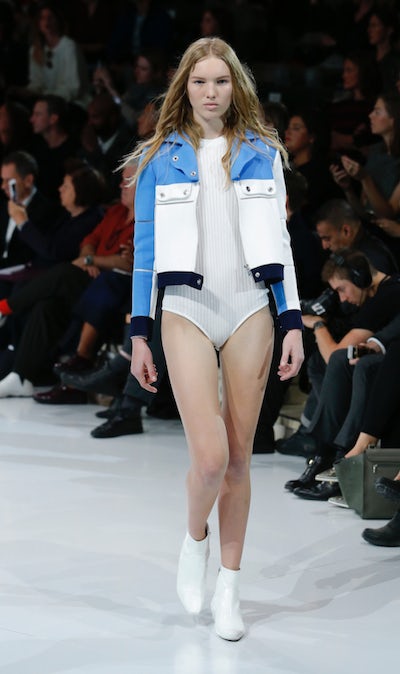 But with the fashion system in flux, there are a few brands challenging the perceived notion that new product, and more of it, is top of a customer’s wish-list. Chief among them are Sébastien Meyer and Arnaud Vaillant, LVMH prize finalists with their label Coperni Femme, which they put on hold to resurrect the space-age mid-century brand founded by André Courrèges, showing today in Paris. The Courrèges Spring/Summer 2016 show, Meyer and Vaillant’s debut collection for the fashion house, was unorthodox in a number of ways: The French designers gave an introductory speech explaining that the show would feature no full looks, that only 15 items would be available (but in 15 variations of materials including suede and leather), and that a ribbed, knitted bodysuit would act as a canvas to the entire collection.

“We felt too much information and too many choices are major issues in a women’s life in 2016,” say Meyer and Vaillant. “The rhythm of the seasons is terrible for designers and the pressure to produce more and more, without taking the time to analyse ideas, is awful. When a design is beautiful, when it just works, why not make it evolve from season to season? Why not develop its lines and technical qualities, rather than starting everything from scratch? Less is more.”

Meyer and Vaillant identify ‘simplicity’ as the fundamental value of the brand. To drive home this idea, the Spring/Summer 2016 advertising campaign is devoid of clothes. It comes in three variations, each featuring a single word — ‘dress,’ ‘jacket,’ and ‘skirt’ — in bold, capitalised, sans serif type against a blank spread — simple, bold, but a big risk.

“We often think about a woman in the morning, facing her closet and choosing something to wear,” say Meyer and Vaillant. “What all of us want is a perfect jacket, tailored pants, a beautiful dress, but above all a piece that will accompany us from morning to night with quality, technicality, creativity and durability.” 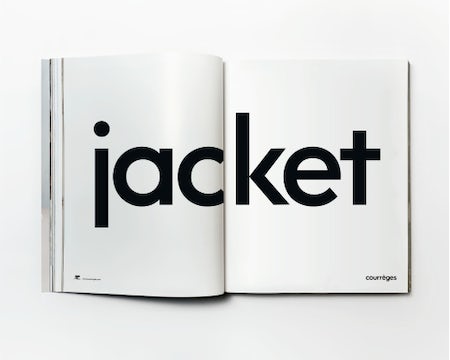 According to Mario Ortelli, a senior luxury goods analyst at Sanford C. Bernstein, core replenishable products were once the reserve of heritage or category-specific brands. “It used to be more typical in accessories or small leather goods but now more ready-to-wear brands are trying to create key pieces that they can propose every season,” says Ortelli, who considers Saint Laurent to be the most emphatic example of this. In his first three years, Slimane’s strategy helped the brand more than double annual sales revenue to €707 million in 2014 (about $787 million), up from €353 million in 2011. “From a business perspective, the more you have of a style, the better your economies of scale and the more experience you have of producing and selling it, so it maximises your working capital. It also increases your profitability by limiting markdowns because you can keep items on sale for longer and they’re not specific to the seasons, so you can work with your manufacturers to re-order throughout the year.”

Leila Yavari, fashion director at Stylebop, a Munich-based e-tailer that stocks Courrèges, believes that there are two types of consumers that her business caters to. The first, she says, is the consumer that seeks unique, storytelling statements and the other wants the signature hallmarks of a luxury brand. “It’s the new logo,” says Yavari. “People don’t want to wear logos any more but they want something that’s equally and instantly recognisable. With Courrèges, it’s all about the core and they’ve really worked on developing that volume of key pieces. The best part is that they haven’t sacrificed creativity or innovation. There’s a sensitivity and welcome turn to slow fashion.”

In Paris, Vetements, the design collective headed up by Demna Gvasalia, has established a product-driven vocabulary of utilitarian items inspired by the casual day and nightwear favoured by young people. In a recent US Vogue interview, Gvasalia said the label started from a list: “What do we need... A pencil skirt, a hoodie, a trench coat, a sweatshirt, jeans, a dress. Then we refined each category by taking screenshots of people on the street — thousands of them from all cultures.” In one season, the label’s stockist list jumped by 53 percent, from 85 for Autumn/Winter 2015 to 130 for Spring/Summer 2016.

Gvasalia also employs a sociologist for his studio to explore the streets of Paris, Berlin, and London to study what young women are wearing, as well as paying attention to his own circle of creatives on the nightlife scene. “You see everyone wearing the same 501 jeans, hoodies, vintage army surplus, and Doc Martens — but each of them is their own character; everyone looks different,” he told Vogue. “There is a style to it, but they really don’t need fashion.” 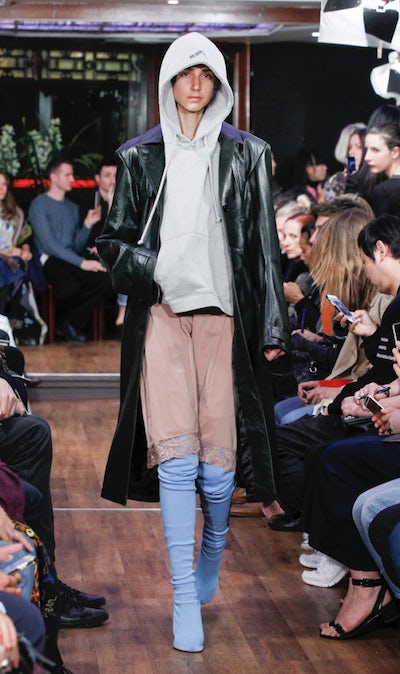 Vetements’ best-selling items are its tracksuits (£790), jeans (£880) and the ruffle-trimmed dresses (£1,140). In buying terms, these are known as ‘replenishment pieces’ — they have a constant sell-through rate, are always in stock, and never go on sale. This is confirmed by Sarah Rutson, Net-a-Porter’s vice president of global buying, who has incorporated replenishment into her strategy. Ruston says that Net-a-Porter’s top-selling ‘replenishables’ include Saint Laurent’s black tuxedo blazer with satin lapels, a double-breasted black leather jacket with gold buttons from Balmain, Rick Owens’ leather jackets, Gianvito Rossi’s leopard-print pumps and a cashmere sweater from The Row.

“These are the clothes that form the backbone of a woman’s wardrobe,” Rutson says. “Smart people have been doing this for a long time but it’s been something hard for people to understand. The full runway looks are relevant to the code of a fashion house but not how 90 percent of women want to dress,” she adds. “When the world is in flux and fashion is going through major changes, these continual pieces will always be relevant to how you’re feeling and allow you to be you.”

Faustine Steinmetz, a London-based designer whose hand-woven and handmade denim made her another finalist in last year’s LVMH Prize, held a presentation at London Fashion Week in September 2015 to establish what she calls her ‘fashion manifesto.’ She announced four categories of product (denim, non-leather, tracksuits, polo shirts) that form the basis of her collections. “I wanted to take pieces of clothing that everyone knows and transform them in lots of different ways,” she explains. “They’re real items. It’s too easy to just invent a woman who goes to cocktail parties and only wears very expensive clothing and when I started doing my hand-woven pieces and realised they would be quite expensive, I wanted them to be something you could wear more every day.”

Now in her third season, Steinmetz’s Autumn/Winter 2016 presentation featured each of the aforementioned items reimagined in a variety of rug-like textures. She continues to do presentations because it’s “more about the clothes, less about the woman.” When asked which companies she looks up to, she offers Pleats Please Issey Miyake and Lush for their simple, creative concepts. However, she acknowledges the need for a visible evolution within her work every season. As a solution to what she considers an unsustainable  pace in fashion, styles from her label’s previous seasons will be available to order on its website at no extra cost, as a way of encouraging consumers to collect her sculptural designs and not feel obliged to do so within the constraints of a seasonal timeline.

“Generation Z don’t like having trends dictated to them and consumers are generally a lot more responsive to the idea of mixing and matching,” says Victoria Buchanan, Trend Analyst at The Future Laboratory, a London-based trend forecasting agency. Last year, the agency conducted a quantitative study that showed that 65 percent of luxury consumers would be interested in adopting ‘seasonless style.’ “If you look at Céline’s [most recent] Spring/Summer and Autumn/Winter campaign imagery it looks pretty much like it’s from the same season,” adds Buchanan. “Consumers will increasingly want brands to act not on the basis of short-term demand, but on long-term vision with sustainability at the core of manufacturing.”