LONDON, United Kingdom — The Levi’s batwing logo can be seen on T-shirts worn by pre-teens, young adults and seniors of every race and gender in New York, Berlin and Mumbai. The denim brand estimates it sells one T-shirt every second.

“They’re an established brand and they’re cool as shit,” said Sam Slegg, 24, sporting a blue batwing on his chest on a recent Saturday afternoon while riding the London Underground’s Victoria Line. “I think they market themselves well and I just like them — their jeans are good, they’re quality and it’s a nice T-shirt.”

The increasingly ubiquitous logo is a physical manifestation of Levi Strauss & Co.’s recovery from its “lost generation” — the in-house term for the period in the early 2000s when consumers abandoned the brand for fast-fashion rivals. Under Chip Bergh, who took over as chief executive in 2011, Levi’s prospects have soared, with revenue increasing 14 percent to $5.6 billion in 2018 from the year before. In March, Levi’s went public on the New York Stock Exchange, valuing the company at $8.1 billion. The company's second-quarter earnings, released earlier this week, went down 21 percent from the year prior to 17 cents per share, but it was the result of a short-term hit from $29 million in costs associated with going public and investing in company growth.

That growth has come largely by relying less heavily on men’s jeans, by far the brand’s biggest seller throughout its 166-year history. In the last three fiscal years, sales doubled for tops, from denim jackets to graphic T-shirts, surpassing $1 billion for the first time in 2018.

“The brand has had quite a resurgence in the last five, six years. Tops and tees in particular have been a huge driver of that,” said Chief Marketing Officer Jen Sey. “The important thing to remember is, it's not really just a T-shirt. You wouldn't wear a T-shirt with a big logo emblazoned across your chest if you didn't really believe in the brand.”

Making the Most of the Batwing’s Moment…

Levi’s introduced the red tab “batwing” logo on the back pocket of its 501 jeans in 1936 to differentiate its denim from competitors’. The logo first appeared on T-shirts in 1967. Its popularity waxed and waned over the years, including a resurgence in the 1990s. 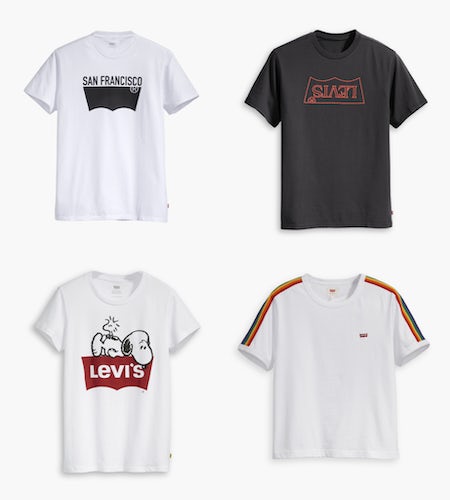 That proved key to its most recent success, as twin waves of 90s nostalgia and logomania swept the fashion industry. Scandinavian fashion bloggers adopted the batwing T-shirt in 2013, kickstarting its return to relevance. The logo’s popularity spread quickly from there.

“[It is] some of the best advertising you can get, walking down the street seeing a bunch of kids wearing a brand,” said Chuck McBride, chief creative officer and founder of advertising agency Cutwater.

Levi’s was quick to capitalise on its suddenly trendy T-shirt. The company has a strategy, dubbed “Centre of Culture,” where it amplifies its brand by partnering with of-the-moment icons, said Jonathan Cheung, Levi’s head of design. Recent examples range from Supreme and Off-White to Peanuts, Liverpool Football Club and Stranger Things.

“[It is] a continual drumbeat of culture and pop culture association of the moment,” Cheung said. “That’s what’s making the brand relevant, which makes the logo relevant. Then expanding the batwing itself and playing with it and adding interest to it, you get a batwing 2.0, 3.0, that type of thing.”

… And Knowing When to Pull Back

The key for Levi’s will be to build on the batwing’s recent success without oversaturating the market. The Burberry check is a cautionary tale; its universal popularity in the early 2000s proved its undoing as fashion insiders abandoned the branding and ordinary consumers grew tired of it.

Cheung said Levi’s tries to avoid oversaturation by regularly switching up which designs it promotes, whether that means tweaking the batwing or highlighting another element of the brand entirely. Older designs may still be sold on the website while newer looks get the spotlight.

“Hopefully, [Levi’s] will be smart enough to pull back once it reaches too much of a critical mass," said Quynh Mai, founder and CEO of digital marketing agency Moving Image & Content. “Once it goes too far and they can’t control their own success, they start ostracising tastemakers and influencers.”

A Brand Has to Stand for Something…

Many consumers are happy to advertise Levi’s across their chest because they believe the brand’s values line up with their own beliefs. That’s particularly true for younger generations, with nine in 10 members of Gen-Z saying companies have a responsibility to address environmental and social issues, in a 2017 survey by PR and marketing agency Cone Communications.

“It’s not just evolving in line with certain trends but also with political and social issues that the young consumers really have on their radar,” said Kayla Marci from retail analytics firm Edited. “That’s really important, especially for a brand that’s so established and been around for 160 plus years.”

You wouldn't wear a T-shirt with a big logo emblazoned across your chest if you didn't believe in the brand.

Levi’s can point to decades of support for progressive causes; in 1992, it ended its relationship with the Boy Scouts of America over the group’s policy barring gay troop leaders.

Mai said Levi’s association with America works in its favour, with customers overseas viewing the brand in the Trump era as “a bit of nostalgia for America that once was.”

Use the Past for Cross-Generational Appeal…

Levi’s regularly mines its archive to find new logo T-shirt designs, from the batwing to the two-horse logo and the sportswear logo, which was reintroduced at Coachella in 2017.

“Heritage brands’ archive of designer graphics are a treasure trove of gems where you can bring out really interesting design motifs that can go into that T-shirt mode,” McBride said.

The reintroduced archive designs speak to the return to 90s fashion — a decade in which Levi’s was at its most profitable — that is currently popular among the younger consumer, but it also retains the interest of Levi’s older clientele.

“What's great about brands like Levi’s is that, the moment they go out of favour, you just have to count the years until they’re going to come back again,” McBride said. “Sometimes it’s ok to go back to move forward. That's powerful because not only does it resonate with a new audience, it also kindles a little fire within the audience that used to love that brand but just had fallen out of touch.”

… But Look to the Future

Within the brand’s 50,000 retail outlets across 110 countries, 41 stores offer T-shirt printing and customisation, including locations in Germany, Spain, France, UK and Italy, as well as their e-commerce site, where consumers can also personalise their products.

In the future, being able to customise is something that is going to be a new normal.

The introduction of the printing bars speaks to Levi’s history of product customisation, which was adopted by biker gangs and rock musicians who personalised their jeans and jackets with patches, badges and rips. However, customisation today also speaks to consumers’ desire for individuality, allowing them to own a unique tee they designed, whether that features Snoopy from the Peanuts collaboration or a customer’s name or city.

And this desire for customisation is not something Levi’s forecasts as a trend but as a future norm and consumer expectation. “In the future, being able to customise is something that is going to be a new normal. Everything else is personalised — your Netflix feed, your Instagram feed, your Amazon feed,” says Cheung.

“We recognise that [personalisation is] part of our culture, that people are always wanting to decorate Levi’s. We do a lot of events like Coachella where we experiment with the next level, so we use airbrush painting and live-screen printing and tie-dying. More and more, you will start to see those interactive activations appear in stores.

Why Levi's Is Worth $8 Billion