TOKYO, Japan — From giant robots to saucer-eyed schoolgirls to a certain ubiquitous kitty, Japanese pop culture is a phenomenon that has reached far around the world. Since the 1970s, Tokyo has been the epicentre of the country’s style movements — and one of the most well known to emerge from its backstreets is the “kawaii” aesthetic. It has become a trope that outsiders immediately associate with Japanese fashion but, in fact, it is a lot more complex and subversive than the ruffled pastel incarnations people imagine it to be.

In general use, kawaii — made up of two characters that respectively signify “able” and “love” — is an adjective for something that is cute. Many Japanese people associate the kawaii style with girliness and adorability, and it helped popularise eye-catching street styles such as Lolita and Decora worldwide. But the reality is that several subcultures have long since branched out of kawaii and some individuals are using its saccharine sweetness to talk about a difficult local issue: suicide and mental health.

Yami-kawaii — “yami” meaning sick or alluding to the hospital — is a “sick-cute” aesthetic that has been bubbling out of Tokyo’s streets and manifests through accessories such as fake guns, syringes, gas masks, pills, bandages and plasters. It’s a mash-up of frills, hearts and pretty fonts spelling out words like “I Want to Die” or “Fuck Everybody Else.” Beauty looks on some Instagram stars feature feverishly white skin and red puffy eyes. There is even a popular cartoon — Menhera-chan — created by illustrator Bisuko Ezaki, featuring a pink-haired girl with bandaged wrists, holding a knife.

The concept of yami-kawaii is to dress as if ill, fragile or wounded, said Masako Ogura, a Tokyo-based stylist that works with titles like i-D, Nylon and Inventory. “People are dressing this way to express their dark feelings. It’s a new trend for girls to get attention and to feel like they belong to a group,” she observed. “They want to express that they are somewhat depressed but in a super cute way.”

“It ties in with menhera [Japanese slang for referring to mentally unstable people], who are often part of online communities and message boards where they would share dark posts or write cynical comments,” explained Misha Janette, a consultant and TV show host in Tokyo, who first came across yami-kawaii when hosting a programme on Japanese national broadcasting channel NHK. It might seem unusual for a public, mainstream network to delve into such a dark subject, “but they simply introduced it as kids in Harajuku,” said Janette.

For a while, there was guro-kawaii — “guro” referring to something gory or grotesque. The Osaka artist Mori Chack is one of the forerunners of guro-kawaii; his brutally cute bear Gloomy, which launched in 2000, sports bloody claws, tearing a little boy to shreds. Chack's work is a reaction to the oppressively cute Hello Kitty type characters that populate Japanese pop culture.

While the popularity of guro-kawaii has been diminishing, it’s clear that elements of yami-kawaii still serve as inspiration for Japanese designers. For her Autumn/Winter 2018 collection at Tokyo Fashion Week, Jenny Fang of the fashion brand Jennyfax presented sugary prints and sweet embroideries with a subversive twist. Models walked the runway accessorised with chopped-off limbs. “My designs are 50 percent kawaii, 50 percent raw and with a dark reality,” Fang told BoF. “My point of view is that yami-kawaii is an expression of an aesthetic. People dress that way [for] attention.” 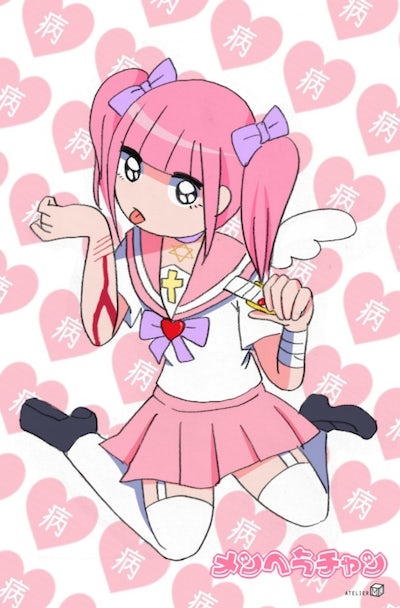 But the uncomfortable movement for referencing negativity also chimes in with the stigma surrounding mental health in Japan. Data from the National Police Agency shows that 21,764 people in Japan took their own lives in 2016. The suicide rate has been notably dropping — in fact, it was the lowest level in 22 years — but it is still far higher than most other developed countries. (In comparison, it is three times the suicide rate in the United Kingdom.)

Multiple analyses suggest a major impact in Japan was the 2011 “triple disasters” — earthquake, tsunami and the nuclear reactors’ meltdown — which generated significant psychological stress for the affected population. Other studies and government materials have cited a number of other factors, including academic pressures, overwork, financial struggles and unemployment.

Yet in a country where suicide is rampant, mental health is rarely discussed and a willingness to turn to support systems remains low. “One difference between Japan and the US is the likelihood of people going to talk to a counsellor or therapist. It’s much more popular in the US. In some cases [in Japan], I hear people who say they don’t want to go to a therapist because they think it would make them look ‘crazy,’” said Allison Alexy, a cultural anthropologist at the University of Michigan, who specialises in contemporary Japanese culture.

“The topic of mental health is still taboo,” agreed Brandon Chin, a copywriter and novelist who writes about Japanese culture. “In my experience, the average Japanese person keeps the door to their emotions shut tight. So for those that have mental health issues, painful suppression is the only way. They don’t have an outlet. They don’t have support. People don’t find out their friend had unresolved issues until they read their obituary.”

Dressing up in yami-kawaii style is a way for some to let others know that they are suffering psychologically or in mental anguish of some kind, suggested Chin.“Most people might say that yami-kawaii is just having fun with fashion, but for me, everything starts inside and the aesthetic represents what is happening mentally,” he said. “Whether they’re actually calling out for help is another question, but it’s like shouting down a loudspeaker and telling the world: ‘this is how I feel.’”

But not all those who embrace the style say they’re experiencing mental distress. For online influencer June Crees, who has over 29.3k followers on Instagram, yami-kawaii is an aesthetic choice. The Australia-based 18-year-old posts photos of herself covered in Hello Kitty plasters and fake blood. “I was inspired by the Instagram artist Elfgutz [who creates guro-kawaii dolls] and his unique pairing of pastel cuteness with gore caught my eye,” she said, but acknowledged that “there are people who choose to express themselves this way because of mental health or other illnesses; it’s a creative outlet for them.”

The notion of yami-kawaii has started to spread further West and some businesses are hoping to capitalise on its popularity. Online store Zombie Unicorn sells pastel coffin rings, band aid hair clips and syringe necklaces alongside other bracelets, pins and brooches. “Due to the sudden rise of menhara and yami-kawaii, first in Japan and then in Western countries, I changed my designs to revolve more around those styles,” said Anna Czyżewska, who has been running the shop since 2014. She is based in Poland but has customers in Japan, the US, UK and Canada.

Czyżewska declined to comment on sales figures but said “around 60 to 70 percent of sales in the past year have been medical themed.” Other brands like MYOB (short for Mind Your Own Business), Nesin and ACDC Rag have become cult favourites thanks to their dark, jarring designs. American media company Refinery29 also took a deeper dive into the subject this year for a video series where they spoke with Menhera-chan founder Ezaki.

At the end of the day, the movement still remains relatively underground. “Unless you’re owning that phrase as an empowerment, not many people would want to say that they’re yami-kawaii. It is still associated with a community of people experiencing mental health issues,” said Janette. “These days you’re going to find it more online than out on the streets. They have events where they’ll get together and wear their outfits. It’s the same with the Lolita community, where they mostly get dressed up for tea parties with their friends.”

But Alexy isn’t convinced. “There are lots of micro-subcultures in Japan, such as yami-kawaii. While they do exist, the idea of certain categories could be more popular than the actual category itself,” she warned. “Often there are only a number of people [in Japan] who believe in it, but there’s a whole population of people out there who are more interested in it.”

Does Fashion Have a Mental Health Problem?