Editor’s Note: Since the original publication of this story, the Revlon One-Step has had yet another viral moment online. It’s tripled its Amazon reviews to 22,000 in the past six months and reportedly sold out on the marketplace. A podcast called “Gee Thanks, Just Bought It,” which recommends products, gave it a shoutout at the end of the year, prompting a new wave of converts and online chatter. It’s since had a price cut. Several copycats, including one from the company that licenses the original, have appeared on the market.

This story has been updated to incorporate the latest developments in the Revlon One-Step craze.

NEW YORK, United States —  The story of the hair dryer that conquered the Internet, like so many trends in recent years, begins with a whisper network of well-connected moms.

“This Revlon hair dryer is single-handedly taking over the world! I mean, Revlon could retire [tomorrow] on just residuals from our Peloton group,” reads a typical August 2018 post in the Official Peloton Mom Group on Facebook, which has almost 31,000 members. Fast forward to May 2019, when another user asked, “Anyone have the Revlon blow dry brush? Is it worth it?” Among the 170 replies, one woman said, along with many laughing face emoji, “You must be new here. Welcome! Get the dryer!”

“The Revlon dryer,” as those in the know call it, is a bulky, oval-shaped hairbrush which dries hair via perforations in the brush head while two different kinds of bristles smooth and lift hair. Officially called the Revlon Pro Collection Salon One-Step Hair Dryer and Volumizer, it debuted with a hot pink model in 2016, promising to dry and smooth hair in half the time. At the time, it appeared to be another in a long line of gimmicky blow dryer hybrids that have appeared in drugstore aisles, beauty supply stores and the Home Shopping Network since at least the 1990s.

It’s hard to pin down the moment the Revlon dryer tipped from yet another beauty launch to a viral sensation — likely somewhere between when the Peloton moms discovered the device last summer and when mega-influencer Kathleen Lights featured it this March.

Today, the Revlon dryer has almost 22,000 on Amazon and regularly tops the marketplace’s list of beauty bestsellers, edging out products like Q-Tips, Listerine mouthwash and Crest Whitestrips. Ulta Beauty has at times struggled to keep the device in stock, and Chief Executive Mary Dillon called out the product’s strong sales in a May earnings call. Helen of Troy, the company that licenses the device, declined to disclose sales figures, though in April Chief Executive Julien Mininberg credited “exceptionally strong hair appliance growth” for better-than-expected beauty sales. The company has since released a similar product under its Hot Tools hair brand.

How this particular accessory became a viral sensation is a case study in the power of social media and Amazon to drive the latest beauty and fashion trends, and ultimately, sales. And though brands can engineer virality by carefully seeding products with influencers or a well-timed ad campaign, often they find themselves just along for the ride.

The One-Step’s rise is all the more remarkable because it comes at a time when demand for hair tools — which range from hair dryers to flat irons - is cratering. A more natural look is in style, boosting demand for air-dry creams, beach sprays and other products for styles that don’t require hot tools. US hair dryer sales slipped from $352 million in 2012 to $291 million in 2017, according to Mintel.

“They’re not tossing their hair appliances, but they’re using them less,” said Shannon Romanowski, a director at Mintel who oversees the beauty, households and health and wellness categories. 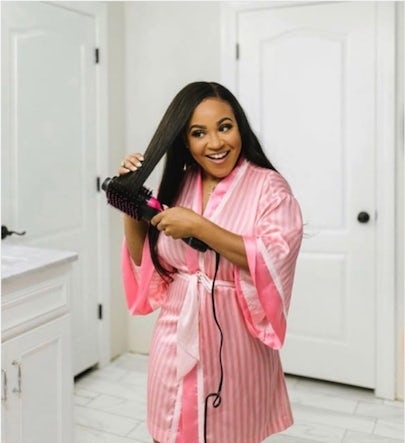 The One-Step addresses the difficulty of achieving a smooth blowout on one’s own head, a pain point that Drybar, Glamsquad and others have capitalised on in recent years. At just under $60, the tool is also relatively affordable — a few dollars more than a basic blowout at Drybar. Dyson’s Airwrap, another popular multi-tool launched in October, retails for $549.

Though a strong seller from the start, its discovery by influential Facebook groups in the summer of 2018 “may have helped to generate awareness and buzz, leading to sales,” said Monica Arnaudo, senior vice president of merchandising at Ulta. Forever35, a popular self-care podcast, talked it up even earlier, in February. (Gee Thanks, Just Bought It, is produced by Forever35.) Features in People and other magazines and websites, including CNN, followed.

Becky Olson, a public relations professional for the food and beverage industry in Grand Rapids, Mich. and a Peloton Moms member, said she learned about the device when a fellow member shared a before-and-after image to the group.

“[I thought], ‘Wow, someone like me who’s busy and is trying to finagle this hairstyle is able to get that with this tool? I need that,’” said Olson. “I immediately turned to Amazon, and there was this frenzy in my newsfeed of people saying, ‘I just got it!’”

In September, Olson asked how many people had purchased the dryer, receiving nearly 900 responses, mostly in the affirmative.

Unpaid product recommendations in Facebook groups can be a windfall for brands, especially as some consumers grow sceptical of ads on social media and influencers’ sponsored content. The social media giant has even begun running TV ads touting its groups.

“We’ve seen a big push from Facebook prioritising groups because it represents a means to recover the trust and authenticity that made those social networks so revolutionary to begin with,” said Eva Taylor, senior manager of social marketing at Hootsuite, a social media management platform.

Olson said she is active in about seven Facebook groups and a member of many more, including ones for children born in the same month and year as her kids. She said in addition to the Revlon dryer, she’s purchased Drunk Elephant skin care, Leanbean supplements and Amazon swimsuits on the advice of the Peloton group.

“I’ve seen a lot of friends downgrade their usage or leave Facebook, but moms in my circle will say they’re there for the groups,” she said. “That’s where they turn to for advice and camaraderie.”

Helen of Troy also put marketing dollars behind the product after the dryer started to gain traction last summer. The company began working with Influence Central, an influencer marketing agency. At least 10 small to mid-tier influencers posted about the One-Step and other Revlon hair tools in late 2018. A spike in Google searches followed.

The campaign quickly took on a life of its own. Larger influencers independently found and recommended the One-Step, including Kathleen Lights (usually known for her makeup tutorials), who raved about the device to her more than 4 million YouTube subscribers in March, in an unsponsored video. Milana Burykin, a hair influencer with 1.2 million YouTube subscribers and 473,000 Instagram followers who posts under the handle Milabu, has featured it at least 27 times across her platforms, also unsponsored. Her two most popular videos, including one with 2.8 million views, both include the One-Step.

Between March 2018 and May 2019, Helen of Troy’s appliance generated $1.6 million in earned media value, a measure of mentions and engagement on social media, up from $255,500 in the previous 13 months, according to Tribe Dynamics.

The buzz was amplified — and presumably turned into sales — via links to retailers that influencers included in blog posts.

When consumers discover a hair tool they like, they typically continue using it until it breaks, limiting the size of the market. It also makes user reviews - especially on Amazon - all-important, as customers are more likely to thoroughly research an appliance before they purchase it, according to Mintel’s Romanowski.

Amazon has its downsides. The marketplace is now rife with lower-priced copycat dryers, frequently advertised with copy that includes the phrase “one step.” Several have paid to have their product promoted alongside the Revlon dryer in searches.

For Helen of Troy, the dryer may only provide a short-term boost to its ailing beauty division, which saw sales slip from $431 million in 2015 to $346 million in 2018. The company has introduced new colours, including a green version launched for the holiday season, but has yet to develop new features that would convince fans to buy another one. Some reviewers on Amazon complain about the dryer breaking after a few uses. This happened to Olson, who has only used it twice.

“I think in this case it could be a flash in the pan for them,” Romanowski said. Or, if the latest frenzy around the hair dryer is any indication, maybe not.

Coty’s turnaround plan starts with a $3 billion writedown. The beauty giant’s attempt to staunch the losses that it has suffered since acquiring former P&G brands like Covergirl and Clairol begins with simplifying its executive structure and focusing on fewer product lines.

An influencer launches toxic (masculinity) grooming products. Dan Bilzerian, who shares images of himself with women in bikinis to his 27 million followers, is launching a pheromone-infused grooming line called Alister.

L’Oreal in talks to buy Mugler and Azzaro. The company hopes to make a deal with Clarins Group to purchase the two brands, known for their best-selling fragrances.

Shiseido launches a customised skincare subscription service. For about $90 a month, Optune will analyse consumers’ skin via app and mix up bespoke skincare out of 80,000 possible ingredient combinations.

Influencers have to take a final exam to work with a new supplement company. Probiotic brand Seed is requiring potential influencers and brand ambassadors it partners with to do an online education course about the brand and FTC posting requirements — on Instagram Stories.

Rihanna isn’t the main driver for Fenty beauty in China. Actress and beauty blogger Lin Yun, who has ten times the following as the singer on Weibo, has been the de facto face of the brand in the country.

P&G launched a new hair care line. My Black Is Beautiful, a 5-SKU line of hair care for consumers with Type 3 and 4 curly hair, launches at Sally Beauty.