NEW YORK, United States — When Pookie and Louisa Burch launched their line Trademark in 2014, they wanted the collection — filled with distinctive spins on humble sartorial staples, from the picnic check to patent leather — to be priced as low as possible without sacrificing quality. In their minds, that meant selling the majority of their product for under $500 while sourcing from Italy in relatively small batches. For the most part, however, this proved impossible to achieve, with some of their products topping $1,000 at retail.

In 2017, Trademark streamlined the business, closing its flagship in downtown New York, discontinuing ready-to-wear and focusing on accessories — bags, shoes and jewellery — which were performing far better. While they were confident in the pivot, there was still retailer resistance to certain styles because of how expensive they were.

The Burches knew something had to give, so they went back to their loyal sourcing partners in Italy and re-negotiated, in some cases increasing the number of units they ordered in exchange for a better per-unit cost. They also began manufacturing some goods in Asia, still using Italian leather. The tweak allowed them to decrease their prices on average by 40 percent for Autumn/Winter 2018 without sacrificing their margin (or, they say, reducing quality). For autumn, orders from wholesale partners doubled, as did the number of doors where Trademark is sold. 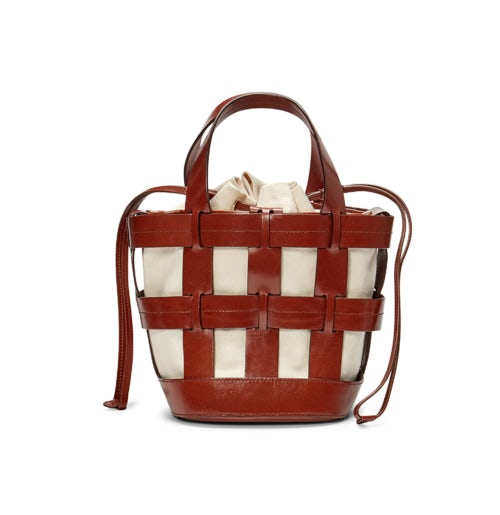 The duo is already seeing results on their own e-commerce site, where they lowered prices on certain shoe styles for the spring season, resulting in a faster sell-through rate at regular price than in past seasons, a “significant” increase in sales volume, and are on track to triple sales this year. “Customers are buying in multiples,” Louisa Burch said. “Just seeing that has been really exciting. It’s the price point we always want to shop at.”

Trademark’s new approach to pricing seems to be working thus far. But adjusting pricing — upmarket or downmarket — can also irrevocably damage a businesses. Consider the case of Edun, which recently split from parent company LVMH and shutting down its current operations after changing its positioning multiple times over the course of its 13-year lifespan. While Edun faced plenty of other challenges, the confusion around pricing certainly contributed to its woes, resulting in fewer long term relationships with retailers.

Then there’s Marc Jacobs, which folded its contemporary and designer collections into one label, creating confusion among retailers and consumers alike. While prices were generally lower than they had been in the past — every bag currently for sale on its e-commerce site is under $500 — the shift was poorly communicated. The brand has shrunk by half, according to industry analysts. A few years back, Mulberry’s attempt move from the accessible luxury segment to the high end of the market under ex-Hermès executive Bruno Guillon backfired dramatically, shrinking its profit by half in 2013.

Ideally, brands get pricing right when they are first established. But if that doesn’t happen, it’s important to course correct as early as possible. This can be a complicated, emotional exercise that requires designers to think pragmatically, leaving their egos at the door. After all, many marketers posit that mastering the Four Ps — a concept that emphasises the importance of product, price, place and promotion — can make or break a brand’s success.

“I always ask designers, ‘What do you want your business to be?’” says Lisa Metcalfe, founder and chief executive of Ten Yards, a New York-based firm that advises startup fashion brands on business operations. “You make very different decisions based on what kind of company — how big of a company — you want to run.”

So how exactly should a brand determine its prices?

The first step in pricing is determining the “landed cost,” or the basic costs of getting something made, which include materials, labour, packaging, duties, transportation and distribution. To determine the retail price of an item — the price a wholesale partner will sell it for in a store — brands will take the landed cost and often multiply it by 6. If the landed cost — plus marketing expensese — for a bag is $20, a brand may set its suggested retail price at $120. The brand could charge the retailer about $50 for the bag, which means the brand earns a margin of 60 percent. The retailer earns about a 58 percent margin.

The aim is usually to achieve an average margin of 60 percent across the collection. Some items — like one-off pieces that are expensive to make but have good brand marketing value — often have thinner margins, while core items with more fixed costs — t-shirts, jeans, etcetera — have wider margins. (They’re often referred to as “margin drivers.”) Many retailers try to ensure most products have wide margins to allow for discounting. Brands that sell primarily direct-to-consumer, such as Instagram-famous dress label Realisation Par or luggage brand Away, don’t have to mark up their products as highly because there is no cut going to a middleman.

Things get more complicated when brand strategy and market positioning come into play. For instance, say a designer wants to decrease her prices because they “feel” too expensive, but she can’t get the costs down. To get that retail price to where she wants it, she may have to sacrifice margin, change suppliers or increase her production run to bring the landed cost to where she wants it to be. However, producing more pieces is risky: much of that additional inventory may end up being discounted, which quickly wipes away any chance of making a decent profit. Relying on end-of-season discounts — and the off-price market — is a “losing battle,” Metcalfe said. “It can completely dilute your brand.”

Sometimes, brands are forced to increase prices in order to keep quality up to their standards. For instance, lingerie brand Commando, best known for its seamless raw-edge underwear beloved by runway designers, increased its prices by 10 percent on average in late 2016 to help absorb an uptick in costs associated with its supply chain.

Price adjustments tend to be most effective when the difference is subtle enough that the brand need not switch to a different class of retailer, or even to a different space on the department store floor. According to Metcalfe, moving from the advanced-contemporary prices (say, $795 for a dress) to the middle-of-the road contemporary prices (somewhere around $495 for a dress) can help drive enough volume to keep margins in tact without creating any discernible differences in quality.

Conversely, increasing prices slightly can sometimes increase perceived value. Shortly after Commando upped its prices, chief executive and founder Kerry O'Brien also renegotiated her contracts with department store partners so that brand staples would now be excluded from discount events. (Seasonal prints still get discounted.) “Commando makes luxury basics, so taking promotions off the table means that our consumers can purchase Commando with confidence, knowing that our product is not going to be on Friends & Family somewhere next week,” she said. Year-over-year, both sales and units sold have increased by double digits.

To be sure, today’s consumer is savvier about price and positioning than ever because they are able to easily compare and contrast across options. This new reality requires brands to take a nimbler approach to getting the price right. “This consumer is very educated, they really know what they want, which makes our jobs more complicated,” Pookie Burch said. “You have to be on your toes.”

Fashion Inflation: Why Are Prices Rising So Fast?

Building a Fashion Business from Scratch | Part 1: The Idea