How Vika Gazinskaya Put Herself on the Fashion Map

In recent seasons, Moscow-based designer Vika Gazinskaya has attracted attention, and orders, from some of the world's most influential stores, including Colette, Net-a-Porter and Fivestory. How did she do it?

NEW YORK, United States — “Doing fashion in Moscow is like reinventing the wheel,” said Vika Gazinskaya, who designs and manufactures her line in the Russian capital. “You have no people who understand how to shape [garments] or how to even answer emails from buyers or international press. We see what the wheel looks like, but we don’t know how to do it.”

The blunt-bobbed Gazinskaya, child of the Soviet Union turned beacon of Russian fashion talent, is helping to change this situation. Last year, Gazinskaya was named a finalist for the prestigious ANDAM fashion award. Her voluminous, structured, demi-couture designs, playfully punctuated by raindrop or cloud motifs on luxe French and Japanese fabrics, have won over influential retailers such as Net-a-Porter and Colette.

But getting to this point was anything but pre-ordained.

An only child, Gazinskaya grew up “in a very simple family,” living in a communal apartment in Moscow with two other families. “In those days it was the Soviet Union, and we had nothing about fashion at all,” she recalls. “We didn’t have most magazines, we didn’t have any TV about fashion. Nothing.”

It wasn’t until she was ten, after the Soviet Union fell, that Gazinskaya had her first introduction into what she calls “the glossy life.” Mattel had opened a store nearby. “I went there every week, just see to what they did. I mean, these catalogs for Barbie... I saw this life and it blew my mind. The dresses, the shoes, the houses, the horses, the husband, everything.” In fact, Gazinskaya’s first designs were for the Barbie doll her mother bought her. “I started doing small dresses — for example, the gloves that my mom wasn’t wearing anymore, I cut the embroidered part of them and they became a sweater for Barbie. Or I cut a stretchy umbrella cover and it was a skirt for Barbie.”

By the age of 16, her mind was set on fashion. She began taking drawing and painting lessons from a local artist and, at 19, enrolled in Moscow State University to study fashion design. “My mom couldn’t afford to send me to [Central] Saint Martins or somewhere else,” she says.

Through a local design competition in 2002, Gazinskaya was awarded an internship at L’Officiel Russia. “I really spend a lot of time educating myself,” she says of her time at the magazine, where she stayed on for two years, becoming a fashion assistant. “When I went there, I still had no idea who Richard Avedon or Guy Bourdin were.”

“Those days I was doing crazy makeup and nails and everything — I would copy all M.A.C advertisements, which were so colorful and bright, and all of Pat McGrath’s makeup [for Dior]. There was a black and pink collection by Viktor & Rolf: One half of the [models] had pink faces, [so] I also made crazy makeup with pink and big black dots I cut from lace. That’s how I expressed myself.”

In 2004, Gazinskaya struck out as a freelance stylist, “doing some projects for MTV and private clients,” before launching her eponymous label in 2006, with support from Californian artist Bart Dorsa, who financed her first show, but is no longer involved in the business.

For the first six seasons, Gazinskaya showed her collections with theatrical performances at Moscow art spaces. Her first show played on female archetypes — the blonde Hitchcock heroine, the Lichtenstein comicstrip woman — combined with elements of David Lynch’s Twin Peaks and director Robert Wilson’s work. “I tried to mention all the things I loved,” she says. “I love rock and roll from the ‘70s, so every role that the model played was to different music. The curtains opened to the lyrics, “Is this the real life? Is this just fantasy?” from Queen’s “Bohemian Rhapsody” and the finale music was The Doors’ “The End.” Her second show — which she dubbed “the shadow show” — featured a huge screen “25 metres long and six metres high,” which the models posed behind, creating six-metre-high shadows, before walking.

But the real breakthrough that put her on the fashion map came in 2009, Gazinskaya says, when she first decided to go to Paris for the shows. There, she cleverly introduced her work by wearing her own designs at the shows, where she was photographed by influential street style photographers like Scott Schuman and Tommy Ton, and appeared on Style.com, The Sartorialist and Jak & Jil, generating invaluable exposure for herself and her fledgling label. Indeed, she would later go on to become a member of the heavily photographed “Russian Fashion Pack,” alongside street style stars Ulyana Sergeenko, Miroslava Duma and Elena Perminova. 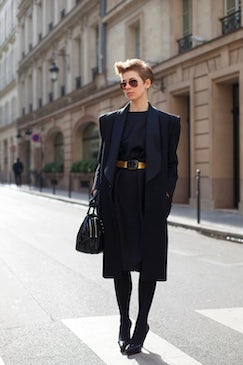 Gazinskaya says it happened organically. “I started to go to Paris for the fashion shows; I was wearing my pieces, and the bloggers just appeared,” she recalls. “I was shocked that I attracted interest from people. From the first season, Scott [Schuman] shot me and put it on The Sartorialist and his Style.com section. I had no idea who he was.”

But there’s little doubt that her consistent appearances on prominent street style blogs, “paved this road for a designer who doesn’t have money to advertise themselves,” she says. “[They instead can make a name] through the blogs, through the street style thing and through the Internet in general. It was not the [plan] but it happened to be a good thing.”

A couple of seasons later, Gazinskaya traded in her theatrical Moscow shows for a Paris showroom, a decision which helped her “get the buyers,” she says. “I would never get into the stores [outside of Moscow] if I didn’t show in Paris. In those days, Moscow was so far from the fashion scene — all these shows, no one saw them.”

In her first season with the Paris showroom, Gazinskaya emailed Colette founder Sarah Andelman some images of the collection: “She ordered and she gave me a window during Couture Week. That was also a very big thing, because in Moscow you can’t meet Sarah from Colette.”

Today, the label is stocked internationally — not only by Colette, but by Net-a-Porter, Moda Operandi, Fivestory and others. Gazinskaya declined to reveal current revenue figures, but says she is searching for a “really smart business partner” to help fund expansion.

“In London, under the British Fashion Council, they give you less expensive models, they bring you press; it’s like in the wild — a tiger, she grows her baby until the moment she feels he is strong,” she notes. “Here [in New York], the CFDA, they support so much. Our government [in Russia], they don’t care about fashion. In their minds, it’s something that the wives of oligarchs can do. When I’m asked how’s the fashion industry in Moscow, I say, ‘What?’ We have nothing.”

There are some advantages to working out of Moscow. “Creating samples is much cheaper,” she says, “and the salaries of my sewers [are] not that high. But to produce and to ship from Russia, it’s really really complicated. [There are] customs issues and my buyers are not happy.” Shipping delays have also cost her editorial opportunities.

Gazinskaya is considering setting up a small studio in New York, but “I need a budget for that,” she says, “because if I do it on my own, I will lose a season. Every step in fashion costs a lot.”

And Gazinskaya has a long list of to-dos: “add accessories, hire a Los Angeles PR, a European PR… and hire the right production person who can take control of things," she says. “Today, I control this and it takes all the time away from creating. For example, I can’t create a second line, which I would love to do.”