CHENNAI, India — Upon entering his credit card details and checking out, a wealthy young Indian consumer prepares himself mentally for what’s to come. The days ahead will be a gruelling test of patience, underscored by frustration and occasional bouts of rage.

“It’s a nuisance that the estimated delivery times rarely reflect reality,” says Muthu Venkatesh — not his real name — a 23-year-old who is from a family so prominent in Tamil Nadu that he insists on using a pseudonym throughout the interview. Sometimes, he says, it can take up to three weeks for parcels from his favourite luxury e-tailers abroad to arrive at his house in Chennai, the prosperous state capital of 7 million people that is home to at least 6,000 of India’s 236,000 millionaires.

Part of the problem for big spenders like Venkatesh — and for the e-tailers serving him, like Matchesfashion.com — is in the final leg of delivery, known in logistics circles as “the last mile.” Today, the last mile remains both the most challenging and costly segment of the journey, accounting for nearly 50 percent of the total cost of delivery. For retailers, efficiency in the last mile translates into both savings and a more pleasurable transaction for the consumer.

In 2017, the state of global parcel delivery is characterised by a never-before-seen dynamism. According to a 2016 study on last mile delivery published by McKinsey & Company, growth rates for the global parcel delivery market in emerging markets like India grew by nearly 300 percent in the preceding year — a result largely driven by the proliferation of e-commerce, which has shifted the focus of delivery from B2B to B2C.

However, as with most infrastructural problems, India’s logistics troubles are multi-faceted. In addition to the country’s poor road networks and congested streets are several other factors that contribute to delays. “The transliteration of my address on the package from English to Tamil and back is difficult sometimes,” says Venkatesh. “The implementation of the national language, Hindi, instead of the regional language [is often confusing for the couriers] who can only read Tamil.”

Moreover, as Venkatesh puts it, the service itself remains lacklustre and at times unprofessional. “If I buy something from abroad it has to go through customs. Sometimes I won't even be notified once it reaches [them]. The delivery guy usually calls from some non-official number, which changes five times making it [difficult for me to contact him].”

In some parts of the Middle East, up to 40 percent of packages are returned to senders as 'recipient location not found.'

While Venkatesh lives on a clearly named and signed street, not all wealthy fashion consumers do. Even in the age of same-day delivery, the UN estimates that nearly four billion people reside in locations without street names or numbers. The United Arab Emirates, for instance, does not use postcodes. Such logistics drawbacks regularly contribute to delivery issues in the MENA region, where some claim that even in the most affluent and urban parts, up to 40 percent of packages are returned to senders as “recipient location not found.”

Meanwhile even in relatively prosperous African nations, like Ghana, officials only recently began designating street signs. A common misconception in the West is that those who suffer from poor addressing are amongst the most underprivileged — and certainly not members of the consumer class. Such a myopic perspective results in a failure to recognise what’s at stake.

"We recognise delivery to be one of the key strategic pillars of our e-commerce operation," says Becky Lombardo, logistics director at London-based Matchesfashion.com, which ships to 176 countries. "Customs regulations vary by country and even by region but DHL our international carrier partner always works very hard and effectively with local custom authorities to ease the delivery. As they have been delivering to these markets for many years, they are seasoned in navigating the delivery challenges and their large in country presence across the world helps to add local knowledge."

Today, several players have established themselves in the “last mile” space, hoping to smooth out the bumps consumers like Venkatesh regularly face. “Retailers have an enormous opportunity to reach new locations if they create a good logistics infrastructure with the right tools, and the opportunity is simply too good to be missed,” says Raanan Cohen, co-founder and chief executive of Chicago-based Bringg, a logistics management platform used in over 50 countries by companies like Fedex and DHL, which helps retailers optimise and prioritise routes in real time.

“Cross-regional retail is here to stay and fashion's global appeal is putting pressure on retailers to modernise their logistics infrastructure so they can meet customer demand and expectations wherever they are,” says Cohen, insisting that “challenges such as bad signage, missing postcodes or lack of street names/numbers can be easily solved with tools such as real-time geo-location.” 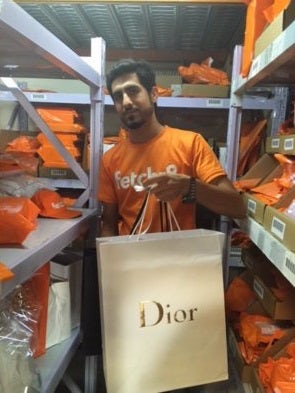 A courier collects a Dior package for delivery in the UAE | Source: Fetchr

Start-ups like Fetchr, a real-time app-based logistics service based in Dubai, are doing exactly what Cohen suggests. Though Idriss Al-Rifai, Fetchr’s chief executive, could not be reached for comment, the company allows e-tailers to deliver to a customer’s mobile phone location through GPS coordinates, thereby eliminating the need for a postal code — or address — altogether. Currently, the service is operational in four Middle Eastern nations (Saudi Arabia, the UAE, Egypt and Bahrain) across over 30 cities.

Others, however, are more radical in their resolve, hoping to altogether displace what they see as an obsolete system. “One of the biggest challenges we face is the preconception that the world is well addressed. Ultimately, what we’re doing is trying to change people’s behaviour,” says Giles Rhys Jones, chief marketing officer of What3words, a London-based logistics technology start-up that hopes to remap the globe.

Consider, for instance, a market like Nigeria. With 191 million inhabitants, the nation boasts the seventh-largest population in the world, growing at a rate of 2.6 percent. And with nearly half the country living in cities, the country has become a hotbed for e-commerce growth. Today, the market is worth around $10 billion according to estimates by Ombola Johnson, the country’s former minister of communications technology, with nearly 200 cross-border e-commerce packages a day (a 70 percent increase since 2014).

However, though the country is home to e-commerce platforms like Jumia—Africa’s first internet “unicorn” — 79 percent of the nation’s homes and businesses still cannot receive door-to-door delivery, according to statistics from Nigeria’s Ministry of Communications. To mitigate the problem, many rent PO boxes but many vendors, particularly fashion e-tailers, do not service them.

Despite such restrictions, homegrown luxury retailers are slowly emerging, catering to high-profile consumers in Nigeria and the rest of the continent. Polo Luxury, which operates brick-and-mortar stores throughout West Africa as the only authorised retailer for brands like Cartier, Gucci and Rolex, has recently begun distributing goods through Polo Avenue, its e-commerce platform. However, as executive director Jennifer Obayuwana highlights, infrastructural limitations remain a big obstacle in her venture.

In an effort to circumvent the issue, this month, What3words partnered with the Nigerian Post to implement “three-word addresses” to expand door-to-door delivery. In the What3words app and online map, the world is demarcated into three-metre-by-three-metre squares — each with its a unique three-word designation. Instead of delivering according to street signs and numbers, which may or may not exist, couriers locate the destination of a package according to those three key words. Ultimately, What3words hopes to extend door-to-door delivery to 70 percent of the population in the next two years, and 90 percent by 2020.

Some Western luxury players are becoming acutely aware of the importance of last mile delivery outside of their traditional home markets. Earlier this year, when China’s JD.com partnered with the luxury marketplace Farfetch, investing $397 million dollars into the London-based venture, the partnership granted Farfetch unparalleled access to JD’s logistics network in China.

Improving logistics in emerging markets is a critical challenge but also a huge opportunity.

According to Andrew Robb, the company’s chief operating officer, JD’s capabilities ultimately trump that of any international express partner, not only in terms of speed but experience — offering time selection, same-day delivery, and even white glove services in selected cities. “Improving logistics capabilities in emerging markets is a critical challenge but also a huge opportunity. This is why companies like JD.com have built their own logistics networks as there were no incumbents that could do the job, and you see similar investments being made in other countries such as India,” says Robb.

“In many emerging markets, the retail distribution and footprints are limited, so e-commerce enables all consumers in those markets to have far greater access to the products and services they need without having to invest in large scale store networks. While the logistics problems are large and need investment, it is much more efficient than building out stores,” he adds.

But as the McKinsey report suggests, the future of the last mile may fall into the hands of drone pilots and autonomous vehicle controllers within the next decade. When or if that day does come, Jones intends to integrate these innovations into the three-word ecosystem. Currently, what3words is working with companies like the US-based Hylio, which builds delivery drones and the software that guides them.

While Amazon has been developing its own programme for years, JD is already working with drone delivery to better serve its rural online shoppers in China. Still, it remains to be seen how large a role these autonomous vehicles will play in the long run. “Drones will play a part in future last mile operations — just like robots and self-driving cars and trucks — but they're not a holy grail,” suggests Cohen.

“The main challenge for companies is that the last mile matrix is getting increasingly complex with all the different delivery channels. In order to succeed, retailers will have to orchestrate their logistics matrix strategically,” he adds, citing the optimisation of all delivery channels depending on customers' location, required service level, price and more.

Editor's Note: This article was revised on August 16, 2017. A previous version of this article misattributed quotes from Farfetch to the company’s vice president of brand marketing Alvina Patel. This is incorrect. The quotes are in fact from its chief operating officer Andrew Robb.

The Human Cost of Next Day Delivery

Is E-Commerce Really Better For the Environment Than Traditional Retail?