NEW YORK, United States — Down a winding hallway of a bustling industrial warehouse building in a Hasidic neighbourhood of Bed-Stuy, one of New York fashion’s most progressive brands calls a crowded studio its home. Pool noodles hang from the ceiling like chandeliers. Inspirational hand-written signs, another remnant from past shows, dot the walls. “You are fast, powerful, strong.” A model changes into a latex red thong bodysuit behind a makeshift wall and then practises her runway walk in the hallway.

It’s a pre-show process Chromat, which celebrates its 10-year anniversary on Saturday night, knows well. The anniversary runway show promises a musical performance, Reebok collaboration and the kind of rowdy, celebratory and inclusive casting for which the brand has become known. Each show feels like a house party hosted by close friends who want you to jump in.

Founder and designer Becca McCharen-Tran’s is an industry insider with an outsider’s point of view: she is one of few queer women designers on the fashion week calendar. She is focused not on ready-to-wear but swimwear, and she casts her shows with a diverse group of models — trans, plus-sized, disabled but most importantly, brimming with infectious confidence. They bring Chromat’s neon monokinis and perforated lycra suits to life.

“She bucked the trend of swimwear always trying to gain business through selling the image of traditionally thin, tall and white women,” said industry consultant Julie Gilhart. “She was and is a true feminist maverick.”

But McCharen-Tran also has the mainstream industry’s attention, thanks to her approachable charm, two go-rounds in the CFDA Vogue Fashion Fund and a suite of heavy-hitting supporters. 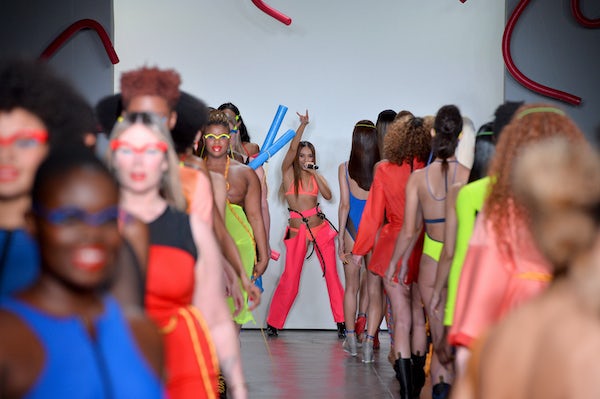 “It’s fun to look across the row [during a Chromat show] at the editors who have been in the fashion industry for years, and watch their faces when they are seeing body positivity on full display,” said Out Editor-in-Chief Phillip Picardi.

While another designer may have become more conservative the more she ventured into the mainstream business of fashion — where editors, consultants and retailers put pressure on emerging talents to become easier to sell — McCharen-Tran has resisted that impulse. If anything, it’s emboldened her to push harder on the boundaries of what is traditionally considered beauty or fashion. (Last year, she accessorised models on the runway with bags of Cheetos.)

This week, Chromat announced plans to sell only direct-to-consumer starting with the Resort 2020 collection presented Saturday night, which will further release McCharen-Tran from the whims of the challenged department store business. She said her wholesale clients had pushed her in the past to make her athletic-inspired swimsuits more traditionally feminine — less bondage-style straps, more florals and ruffles.

“It really felt like we were being tugged on a leash by a lot of wholesalers,” she told BoF in an interview this week. McCharen-Tran and her wife Christine McCharen-Tran moved to Miami in November, and the distance from New York gave the designer space to “think big picture.” Every January, Chromat conducts a survey of its customers, and it became clear that price was a huge barrier. The brand had many fans who couldn’t spend $300 on a swimsuit, and typically half of that price represents the retail markup. The DTC move will allow her to cut prices drastically. (The shift is already reflected on Chromat's e-commerce site.)

Chromat could cut prices in other ways, by using cheaper production methods, but not in a way that makes sense for McCharen-Tran, who prefers Italian fabrics and innovations like nylon spun from fishing nets and plastic bottles.

“What would be the point of this? If we weren’t using sustainable materials or ethical factories? It would just be for making money and that’s not really my singular goal in this world. I’m not in this to get rich and get out,” she said. “That’s not what an investor wants to hear,” she admitted, explaining that she has no financial backers, despite coming close a few times.

I’m not in this to get rich and get out.

Her independence is paying off, slowly but surely. Even though Chromat is still a small business (McCharen-Tran declined to share financials), she is no longer at risk of shutting down over a single bad season — a hard lesson she learned in the early years.

McCharen-Tran studied architecture at the University of Virginia, graduating in 2006, and began making her own clothes in college with simple fabrics and pieces purchased at Goodwill. A coworker at the city hall in Lynchburg, Va., where she worked on an urban planning board, introduced her to his daughter, Virginia Craddock, who was launching what would become the retail/public relations/showroom business International Playground with John Pizzolato. They helped get her body-cage pieces in front of Nicki Minaj and Madonna's stylists, which gave Chromat its first celebrity boosts.

In the beginning, Chromat was best known for its body-hugging, futuristic structures and McCharen-Tran’s technological experiments. She partnered with Intel to create a bra and dress for the runway that responded to body temperature, heart rate and perspiration. Other innovations included 3D printing and inflatable garments. More celebrity placements, including Beyonce’s backup dancers at the Super Bowl and Taylor Swift in a music video, raised her profile in 2013. In the following years, as swimwear became the most commercially successful part of her business, she focused on that category and build the brand’s identity around it. Barneys was one of Chromat’s first supporters, starting in 2011. 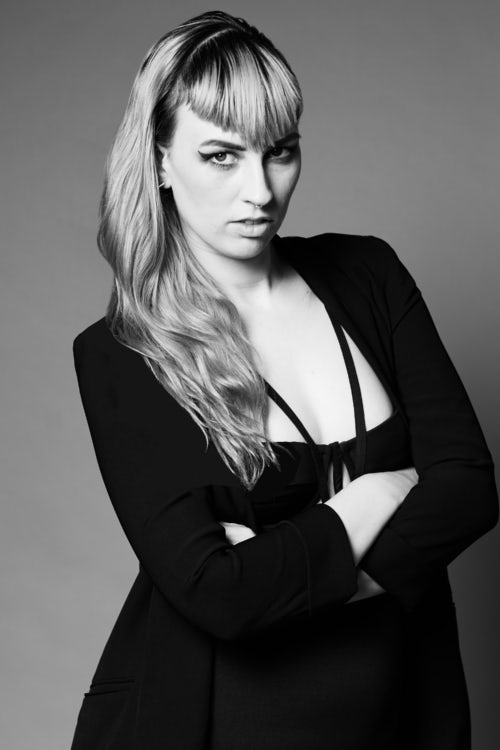 While Chromat has cast models with more body diversity than the typical runway show from the beginning, it wasn’t until the Spring 2015 show that the approach became part of its core identity. At the time, McCharen-Tran was competing in the CFDA/Vogue Fashion Fund and mainstream fashion started paying attention. (She came back to the competition with more experience in 2017, and finished as a runner-up.)

The casting of such a diverse group of models was a revelation, especially for the swimwear market. While inclusivity is the trend du jour in fashion, most runway shows only cast a handful of models who diverge from the conventional rail-thin, tall, able-bodied template. At Chromat, runway diversity never feels like an obligation or a cheesy capitulation to “woke” modern progressive politics. The people who represent the brand on the runway or in its campaigns feel genuinely part of a New York subculture that exists beyond Instagram and beyond a marketing strategy.

McCharen-Tran said going back to her early years designing in Virginia, she always intended to make clothes for the real women in her life. But on the New York runway, she ended up being the most prominent voice deconstructing ideas about the ultimate celebrated ideal.

“It’s such a monumental experience to be seen and be acknowledged,” she said. “I want anyone who sees the shows to realise that they can be part of fashion.”

It wasn’t just about the runway, however. Each spring, Chromat invites hundreds of customers to participate in lengthy fittings in order to adjust the design process for as many different body types as possible.

“Fit is our obsession, and it’s really, really hard because no bodies are the same,” she said.

Picardi said Chromat’s runway diversity came at the right time: around the Trump election, industry debate over the lack of different body types on the runway ramped up.

“Chromat is in your face with the body positivity and the celebration of different types of bodies,” he said. “It’s a really electric feeling.” And as one of the few queer women designers in fashion, “Becca celebrates women in a way that gay men can’t and won’t.”

Gilhart said Chromat has changed the definition of the “bikini” body. “Her casting was the beginning of the "necessity of inclusiveness,’” she said. “She truly uses fashion as a way to build community and to challenge the way we see and perceive beauty.”

The power of that message is equally palpable backstage, said Chromat’s longtime casting director Gillean Smith. She said casting calls have ballooned from 50 people to 300, and that many models return season after season — even when they get picked up by high-profile agencies — because of the genuinely supportive atmosphere at the shows.

“We have started a conversation on what is beauty, what looks good and what people want,” she said. “It’s more of a general unsaid revolution of beauty and standards and I think that excites people.”

McCharen-Tran feels the responsibility of being a platform for body positivity, and said pushing that agenda is the reason why she continues to show at fashion week. But she also feels that the casting has overshadowed the brand’s actual designs, which she said have become too commercial, like a plain red one suit, at some points.

“The casting should be normal and we are getting to the point where it is starting to be,” she said. “I can make my own rules. I’m leaning into that now.” Her audience is listening. “We have our customer,” she said.

What Can the Fashion Industry Do To Be More Inclusive?