Inside an Artist Collaboration

Yesterday, BoF considered the increasingly intertwined markets for fashion and art. Today, we go inside an artist collaboration.

LONDON, United Kingdom — Fashion’s artist collaborations go back to the closely coupled creative worlds of Paul Poiret and Raoul Dufy, and Elsa Schiaparelli and Salvador Dalí. But in the intervening years, much has changed. There is a world of difference between those early twentieth century collaborations — tiny couture collections destined for wealthy bohemians — and their contemporary equivalents: multi-billion dollar luxury goods houses collaborating with blue-chip artists to translate their work into industrially manufactured and globally distributed products.

The current issue of W magazine features an optically-challenging image of George Clooney in a suit and set customised by the Japanese artist Yayoi Kusama. The actor’s salt and pepper hair is echoed in a flurry of uneven monochrome dots proliferating like a cartoon rash across every surface of the image – dots that seem to have become the most immediately recognisable shorthand for the concept 'contemporary art' in the popular imagination. Clooney’s customised suit may be Giorgio Armani, but to the rest of the world, Kusama’s infinite rippling polka dots are associated with another brand entirely; one which, in 2012, was largely responsible for the artist’s promotion from art world prominence to pop cultural ubiquity: Louis Vuitton. 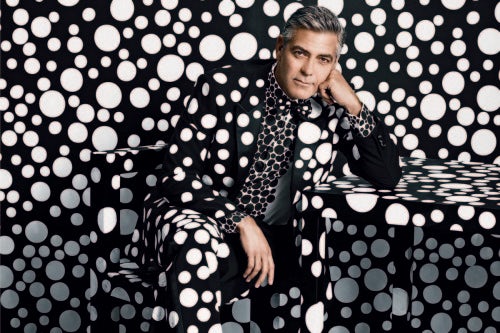 One of Marc Jacobs and Yves Carcelle’s most significant achievements at Louis Vuitton was the introduction of major artist collaborations into the brand’s DNA, helping (along with Jacobs’ fashion collections and overall sense of showmanship) to transform what was a staid French luggage label, whose signature monogram was increasingly associated with cheap knock-offs, into one of the most valuable fashion brands in the world.

Jacobs’ first artistic collaborations for Vuitton were with the New York-based fashion designer Stephen Sprouse (responsible for the monogram’s graffiti makeover, which appeared on everything from leather goods to scarves to sneakers) and the London-based designer and illustrator Julie Verhoeven: both creative individuals already firmly connected to the fashion world.

But in 2003, Jacobs and Vuitton launched a far more ambitious product collaboration with the artist Takashi Murakami. Then aged 40, the Japanese artist had already been the subject of prominent solo exhibitions on three continents. Known for his determined manipulation of cultural boundaries — between high and low, ancient and modern, Orient and Occident — Murakami’s fresh, youthful, pop-inflected reworkings of the monogram, which continued until 2007, and helped to cement Vuitton’s new image.

A collaboration the following year with the American appropriation artist Richard Prince was launched with a runway show in which bags bearing Prince’s irreverent takes on the monogram were presented by sexy nurses, inspired by the artist’s Nurse paintings (themselves inspired by book covers from a nurse-centric pulp fiction sub-genre). Jacobs has also recently worked on a runway show and window designs with the French conceptual artist Daniel Buren.

But Yayoi Kusama Louis Vuitton, which launched in the summer of 2012, was probably the largest artist collaboration initiated by any luxury goods or fashion house to date, encompassing leather goods, ready-to-wear, shoes, sunglasses, watches and jewellery; a roll-out of stroboscopic Kusama window schemes in 460 Louis Vuitton stores in 64 countries; and the creation of seven special concept stores at locations that included Printemps in Paris, Selfridges in London and Isetan Shinjuku and Dover Street Market in Tokyo.

For Selfridges, the Kusama collaboration represented the largest single brand takeover the store has ever engaged in; all 24 windows across the façade were bathed in pointillistic, primary-coloured swirls and maxi-dots, mini-Kusama dolls, and text in English and Japanese spelling out a poem by the artist. Red flags with white polka dots flapped from the store’s flagpoles and the façade was topped off with a four-metre-high fibreglass statue of the artist, her unblinking stare fixed on the Oxford Street shoppers below. Media coverage at the time reported that Selfridges’ Yayoi Kusama Louis Vuitton concept store — itself resembling the interior of a luridly pocked sea urchin, dressed with patterned, pumpkin-like forms — repeatedly sold out of pieces from the collection.

First recognised in the art world for her involvement in the New York scene of the 1960s, Kusama has worked in media ranging from drawing and painting to film, performance, sculpture and immersive installations. The dots, nets and ‘infinity mirrors’ that render her work so recognizable are in part a response to her obsessive personality (Kusama has voluntarily lived in a psychiatric institution since 1977) and desire to understand the position of the individual amongst the infinite multitude.

A fan and collector of contemporary art, Jacobs first visited Kusama’s studio in Japan in 2006. In a video made some years later, the designer recalls it as a long and convivial encounter during which she showed him a Speedy bag that she had customised.

In 2011, Kusama’s work was to be the subject of a comprehensive touring exhibition, which would include Museo Nacional Centro de Arte Reina Sofía in Madrid, the Centre Pompidou in Paris, the Tate Modern in London and the Whitney Museum in New York. Needing sponsorship to help stage the shows, Kusama was formally introduced to the Louis Vuitton house by Hervé Mikaeloff, the art consultant and curator to LVMH and the Louis Vuitton Foundation. The luxury goods house decided to help sponsor the Tate exhibition and its transfer to the Whitney in New York. “We went to Kusama’s studio and talked about doing a project,” recalls Mikaeloff. “It was supposed to be small, but became big, as things usually do with Louis Vuitton. We started off helping her with sponsorship in London and New York, and then it grew into [window designs] and from there into products.”

Glenn Scott Wright, director of the Victoria Miro gallery, brokered the deals with Vuitton for Kusama in close collaboration with her Tokyo gallery, Ota Fine Arts. “There were in effect two different contracts in place,” explains Scott Wright. “One for Vuitton's worldwide windows project in which Kusama's work appeared in approximately 1500 windows all over the world, and a second contract for the design collaboration between Kusama and Marc Jacobs for Vuitton. This started initially as a proposal to do six classic Vuitton bags together but quickly grew to a vast collaboration. As far as I know, this has been Vuitton's largest collaboration to date.”

Promotion for "Yayoi Kusama Louis Vuitton" started concurrently with the exhibition at Tate Modern and the window designs and collection were revealed at the brand’s Fifth Avenue store in New York on the day that the exhibition launched at the Whitney, then rolled out globally. For the Tate, Louis Vuitton’s involvement provided support not only for the exhibition (which was visited by 186,551 people) but also for associated programs and events. In addition, Louis Vuitton’s involvement attracted coverage from media that may not have otherwise featured the show, including the fashion press. Kusama herself appeared on the covers of magazines including Wallpaper, Pop and The Saturday Telegraph Magazine.

By 2012, it was perhaps not the collaboration with Kusama itself that was notable, but the sheer scale of it. The success of Louis Vuitton’s Murakami collaboration back in 2003 had also whetted the wider fashion world’s appetite for artist collaborations. Soon afterwards, in 2004, Longchamp announced a limited-edition collection of bags made with the British artist Tracey Emin. And, indeed, such collaborations have since become an increasingly established part of the fashion landscape: recent examples have included Anselm Reyle with Dior, Jeff Koons with Lisa Perry, Rob Pruitt with Jimmy Choo, and Damien Hirst with Levi’s, The Row and, this season, Alexander McQueen.

But working with artists requires a delicate touch, especially when they are less established. “When there’s too much marketing and emphasis on product, the artist can suffer,” explains Mikaeloff. “We have to be careful, particularly with a young artist, that it doesn’t affect their career. It has happened that there has been a collaboration and you take a look at the artist afterwards and realise that suddenly they’re not getting so many gallery shows. You have to find a way to work with artists that is not going to compete with the art market.”

It is notable that of the artists who have recently given Louis Vuitton a burst of energy, Richard Prince is 64, Daniel Buren is 75 and Kusama is 84; none have anything left to prove to the art world in terms of intent or integrity. “Kusama was already a highly respected artist in art world circles with a major retrospective underway at four of the world's most important art museums,” explains Scott Wright. “What this collaboration did was make her into an international household name.”

Fashion may often be accused of dining on the juice of youth, but, certainly, one key to mutually beneficial collaborations with artists seems to be a taste for rather more mature talents.