When she started her company in 2013, it was one of dozens of multi-level marketing brands relying on armies of customers to hawk cosmetics and skincare products, a model that dates back to the 1960s with Avon and Mary Kay. But Renfrew’s products, which adhere to a trademarked “Never List” of 1,500 cosmetics additives, hit the market just as the clean beauty market was transforming from a hippie niche to one of the industry’s hottest trends.

It’s proven a particularly potent twist on the genre. Many of Beautycounter’s roughly 38,000 affiliates say they’re in it not just for the money, but as a cause. Renfrew amplifies that message with trips to Washington D.C. where she advocates for safer beauty practises.

“I look at our business and the way we sell, and it’s not dissimilar to Etsy or Uber or Zillow or other companies where they’re trying to build a relationship with the consumer and utilise people to acquire customers and to share their story or spread their service,” Renfrew said.

Beautycounter is forecasting $325 million in sales for 2018, up 30 percent from last year, and is currently valued at approximately $500 million, according to people familiar with the company’s finances. An Instagram search for #beautycounter comes up with 444,000 posts. Last week, Beautycounter’s first permanent retail space opened in Manhattan, on the heels of a series of summer pop-up shops in Nantucket and a limited collaboration with Target in 2016.

The brand says the new space is part-beauty emporium that sells the bestselling Countermatch Adaptive Moisture Lotion and Dew Skin Tinted Moisturizer, part-recruiting station and part-education hub. An “It’s Your Call” phone booth encourages customers to advocate on behalf of federal legislation that would give regulators more power to impose restrictions on harmful ingredients. Inside there’s a phonebook with the names and numbers of every congressperson, as well as a script customers can use.

Unlike Avon and Mary Kay, newer entrants like Beautycounter and Rodan + Fields were created for a time when social selling is far more likely to occur through Instagram accounts and blogs than in homes. The newcomers fit well into a beauty market where influencers on social media – sometimes with tiny, highly loyal audiences – drive sales even for conventional brands. 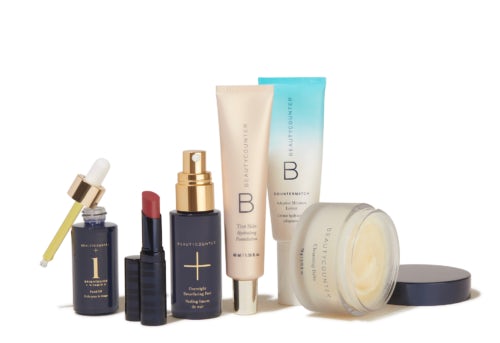 “The composition of our consultant network has shifted as the consumer marketplace has changed,” Renfrew said. “You have women who ... have large influence in the digital world – and they’re able to monetise that. But you’re also seeing women who were originally selling in physical environments who are really using online.”

Beautycounter affiliates pay $98 for a starter kit, and then try to convince friends, family and strangers to buy products through a personal link. They receive a 25 percent commission on sales, and a smaller payout for any sales made by people they recruit into their “team.” The average seller takes home about $500 a year, though those in the top 1 percent make anywhere from $100,000 to over $1 million, according to the company.

The business model has plenty of sceptics, who argue multi-level marketing firms use unrealistic promises about potential income to encourage customers to spend money. Some require affiliates to buy their inventory, leaving unsuccessful salespeople out thousands of dollars. Beautycounter sells supplemental starter kits for as much as $750, but these are optional, and orders are fulfilled out of the company’s own stock.

“Rodan + Fields is the brand that took off where Mary Kay, Avon and [Tupperware’s] BeautiControl were, and this bridged into where Beautycounter is now,” said Tamara Brown, founder and chief executive of Tamara Brown Consulting. “You’ll see other brands doing it. It’s an untapped territory – Beautycounter just got in on the early stages.”

Cassy Garcia reached the highest of Beautycounter’s eight tiers in June, about two years after she began posting her affiliate link on her nutrition blog. Garcia said she participates in numerous affiliate programs, including Rewardstyle, Amazon and ButcherBox, a subscription meat company. But Beautycounter now makes up 90 percent of her commissions.

Garcia said one of her first big hits came soon after she started, in June 2016 with a charcoal cleansing bar, which helped drive $10,000 in sales that month. This year, Garcia has sold over $250,000 worth of product, and her team of 250 sellers – ranging from direct recruits to their recruits and those recruits’ recruits – have driven more than another $750,000, she said. Her personal take home income will amount to about $250,000 this year, she said.

“My audience was starved for high performing and clean, safe products,” she said. “Of course you go where the money is, and I started paying more attention to this. I said, ‘What do I do to nurture this?’”

Melissa McEachen, a full-time nurse based in Los Angeles who spends between five and ten hours a week as a Beautycounter consultant, takes in, on average, $250 per month from selling beauty products. She sells products to fellow riders when she takes an Uber Pool, as well as hospital colleagues. McEachen said Beautycounter’s clean mission drew her in, after her mother’s cancer diagnosis in October 2015 sent her on a quest for non-toxic beauty items.

Beautycounter tests raw ingredients, does batch testing on formulas and then tests products again after the manufacturer has sealed up the formulas. The brand also runs its own research efforts in partnership with University of California, Berkeley and Tufts University.

“We have a large community around our brand," Renfrew said. "We have brand ambassadors who we happen to call consultants who are evangelists for both the brand and the movement.”